The new platform that underpins the EV has been developed with both internal combustion and all-electric drivetrains in mind. 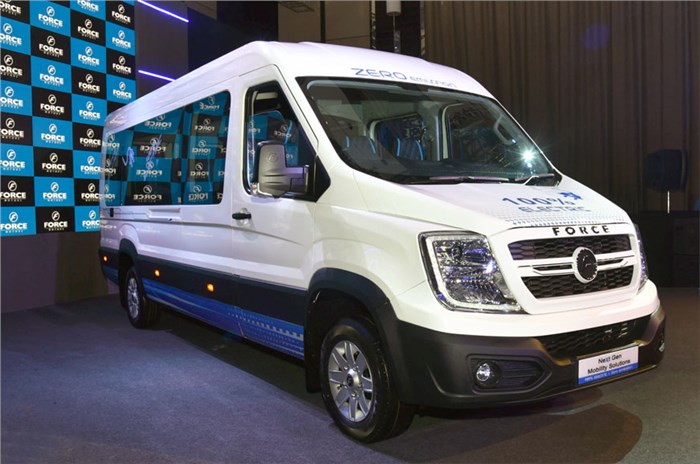 Force Motors has revealed the country’s first shared mobility platform that has been designed and developed for both internal combustion engines and pure electric drive. The Pune-based automotive major took the wraps off the platform with the all-electric Traveller-sized van.

Work on the project – codenamed T1N – began four years ago with the objective to develop a world-class, shared mobility platform that would be ahead of current offerings and raise the bar in terms of passenger comfort, convenience and safety to global standards.

The T1N is the first vehicle in its category in India to offer crash and rollover compliance, along with airbags for driver and co-driver – this is despite current Indian legislation not mandating these safety norms. In addition, the T1N comes with four-wheel disc brakes with ABS, EBD, EDTC and ESP, offering unmatched safety for its passengers.

Force Motors, which is India's largest van manufacturer, has developed the T1N with global aspirations, eyeing launches in select markets in the Middle East, Africa, ASEAN and South America.

A dedicated team of about 100 specialist engineers and senior managers, who were experts in their respective domains, were selected for this project by the brand. The team conducted benchmarking studies with domestic and international offerings, and consulted with leading technology specialists and domain experts across the globe, during various stages of development.

The T1N platform has been designed with a two-box construction, ensuring the least NVH levels in the passenger compartment as the engine is technically outside. For the first time in this segment, an independent front suspension with transverse parabolic springs has been offered, giving it best-in-class ride quality.

Power for the T1N comes from a new BS6-compliant, common rail diesel engine that produces 350Nm of peak torque. A BS6-compliant CNG variant will also be on offer, along with an all-electric version down the line.

This new platform is currently undergoing final validation and homologation processes. A new state-of-the-art facility – that has a body shop with robotic and laser welding facilities – is being set up at the Pithampur works. These vehicles would be showcased at the upcoming Auto Expo 2020. The van is expected to go on sale by the end of the year.

Aside from showcasing multiple models based on its new platform, Force Motors is also understood to be readying the all-new Gurkha SUV for a debut at the Auto Expo 2020. Also expected to be present is the new iteration of the company’s Trax people-mover.

Where are the batteries for these EV' being manufactured?

Where are the batteries for these EV' being manufactured?