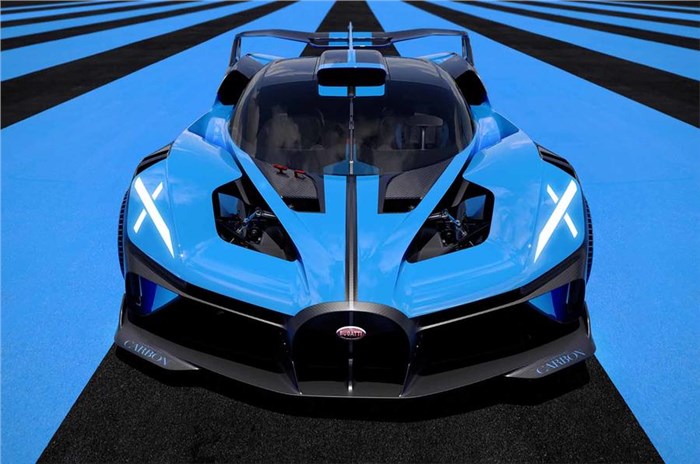 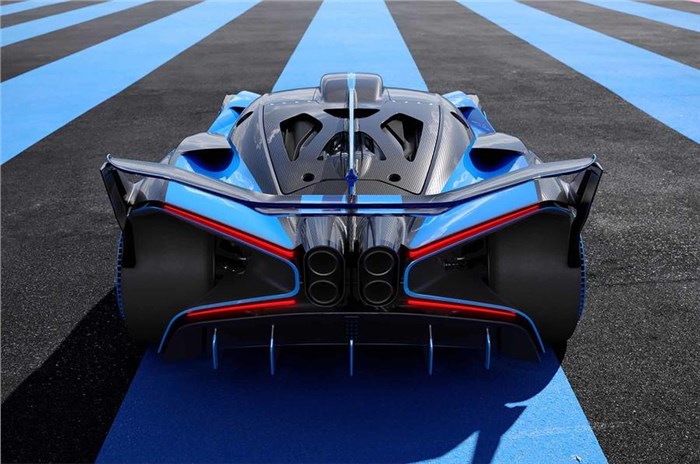 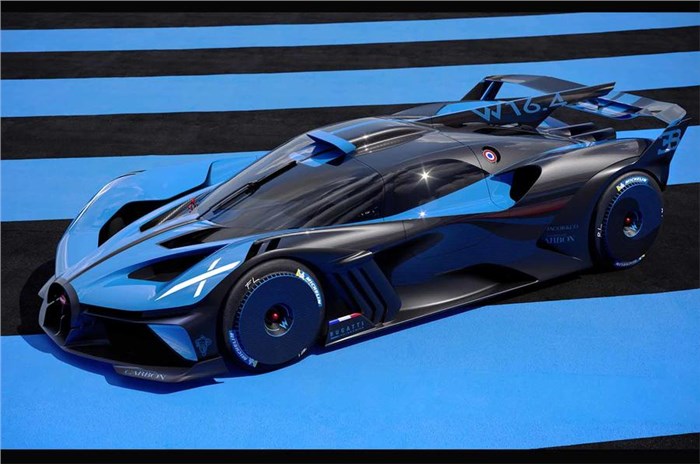 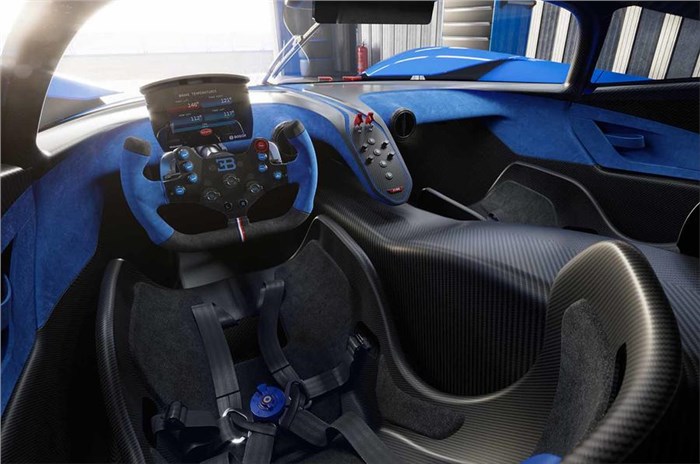 The Bugatti Bolide is “the most extreme, uncompromising, fastest and lightest vehicle concept” in the brand’s modern age.

This track-oriented model, promises an astonishing weight-to-power ratio of 0.67kg per horsepower. That translates to 1850hp for a vehicle weight of just 1240kg. These two figures are made possible by the use of Bugatti's now-venerable quad-turbocharged 8.0-litre W16 engine, powering all four wheels, pumped up well beyond the 1600hp, it puts out in the Chiron Super Sport 300+.  This is done via “dethrottling” the intake of an exhaust system, four newly developed turbochargers and a redesigned dry sump lubrication system, with Bugatti claiming a reduction in the powertrain’s weight. The Bolide's engine also gets air-to-air intercooling with water pre-cooling to keep temperatures down, while the brakes are kept ventilated by carbon-titanium radial 'turbofan' compressors. Three air-cooled oil-coolers, again with water pre-cooling, also feature for the engine, transmission and differential.

What makes the Bugatti Bolide the lightest vehicle?

It’s worth noting, however, that the maximum claimed output is achieved only by using 110-octane racing fuel. Using 98-octane petrol, the figure is actually the same 1600hp as the Super Sport 300+.

Just as much effort has gone into keeping the kerb weight down to that 1240kg figure. The Bolide sits on a super-light and super-stiff carbonfibre monocoque. Carbonfibre is also used in the front-end and underbody. Bugatti claims the carbonfibre’s tensile strength is matched only by that used in the aerospace industry.

Furthermore, all screws and fastening elements are titanium, while super-thin aerospace-grade hollow titanium alloy, originating from 3D printers, is used for many components. Ceramic brakes feature callipers that weight just 2.4kg each, with centre-lock forged aluminium wheels weighing 7.4kg at the front and 8.4kg at the rear.  Those are shod in tyres with extreme width, up to 340mm at the front and 400mm at the rear, while there’s even a compressed-air-driven jack with four rams designed to make tyre changes easier.  The suspension is by titanium pushrods with horizontal dampers. The pushrods themselves weigh just 100g. Welded stainless-steel control arms are also designed as wing profiles.

The dramatic bodywork itself is shaped, unsurprisingly, with aerodynamics in mind. Bugatti claims 1800kg of downforce on the rear wing and 800kg on the front wing at around 321.8 kph.

Highlights include a “worldwide innovation” in the roof-mounted intake scoop, which is claimed to provide active aerodynamics: the surface of the scoop is smooth at low speeds but bubbles bulge out at higher speeds to reduce drag and downforce.

The Bolide is very low-slung and just 995mm tall - 300mm lower than the Chiron. It has doors that fold upwards, like an LMP1 racing car. Air ducts are said to link to the aesthetics of Formula 1 cars, while the ‘X’ theme used throughout (in particular in the rear light designs) are meant to refer to the Bell X-1 experimental jet aircraft that Chuck Yeager piloted to become the first person to break the sound barrier in 1947.

Bugatti claims a theoretical top speed of “well above” 500.50kph, without compromising handling. More strikingly, it claims the Bolide can do a lap of Le Mans in 3:07.1 minutes and a lap of the Nürburgring Nordschleife in 5:23.1 minutes - barely a few seconds off the lap record posted by the Porsche 919 Evo LMP1 car.

Interestingly, Bugatti says the car features safety equipment designed to meet FIA racing regulations. There are also references to the iconic Bugatti Type 35 racer of the 1920s. It remains to be seen if there is any racing intent with the new car, but there are long-circulating suggestions that Bugatti could eventually enter the Le Mans 24 Hours endurance race.

What’s also unclear, however, is if the Bolide will be built for customers. Bugatti claims it has not been decided yet if the car will go into production and that it's currently “an innovative information source for future technologies”.