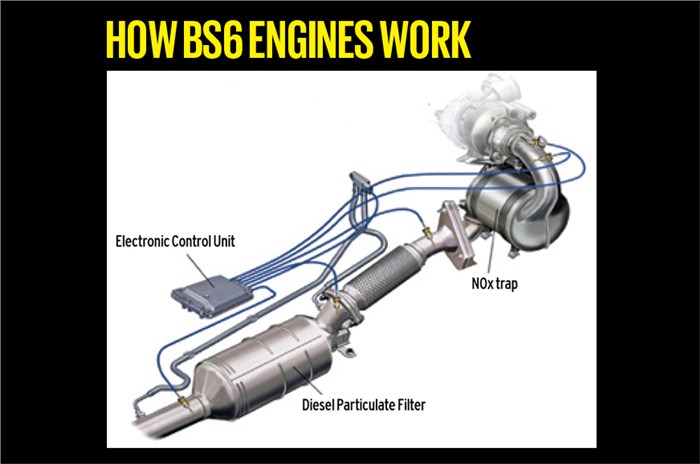 To comply with BS6 emission norms, existing petrol and diesel engines will need comprehensive changes. We’ve broken the tech down for you.

You've read about the evolution of India's emission standards. In part 2, we'll go in to the technical aspects of making a BS4 engine BS6-compliant and telling you how BS6 engines work.

Jumping from BS4 to BS6 involves a drastic reduction in emissions. But let’s understand what makes the emissions so toxic in the first place. The noxious gases being spewed out of the exhaust is the unholy trinity of carbon monoxide (CO), unburnt hydrocarbons (HC) and oxides of nitrogen (NOx). In addition, there is particulate matter (PM) – a microscopic mix of nasty elements that the engine can’t burn. PM hangs in the air and is known to be carcinogenic, if you inhale too much of it. Any engine burning fossil fuel unchecked, emits this deadly cocktail, and the only way to reduce these emissions is to make the combustion process as complete as possible. In theory, the emissions from complete combustion are water (H2O), carbon dioxide (CO2) and nitrogen (N2) – all of which are natural, non-toxic elements. CO2 is the biggest culprit for global warming, though. Combustion, however, is never 100 percent complete and it’s those engines that come closest that are the cleanest.

BS6 standards demand a drastic reduction in emissions (see below) and the technology needed to achieve this varies between petrol and diesel engines as their emissions profiles are different.

How petrol engines are upgraded to BS6 norms

Petrol engines have it a lot easier than diesel, which is why the cost and effort to upgrade them to BS6 isn’t that high. Hence, the cost difference between a BS4 and a BS6 petrol car is quite reasonable and the reason why they will increase in popularity in the BS6 era. Taking Maruti Suzuki as an example, the price hike across its BS6 range is between Rs 8,000 to Rs 40,000. The thing about petrol engines is that they emit far lower PM and NOx than diesels, and hence don’t need the same expensive hardware. To meet the tougher norms, petrol engines essentially need a larger catalytic converter and this isn’t hugely costly or difficult to engineer, even on engines that are decades old. Case in point is Maruti’s venerable 796cc F8D powering the Alto and the 1.2-litre G12 in the Eeco, which are already BS6-compliant.

However, the problem with a bigger catalytic converter is increased exhaust back pressure, which has a direct impact on fuel efficiency and drivability. This is why the official fuel consumption figures on some BS6 cars are lower. Also, the throttle response in many BS6 cars has been dulled, and the power delivery feels flat and less perky.

This challenge has made engine-calibration engineers a much-sought-after bunch, because they are the ones in the field, finely balancing the conflicting demands of performance, fuel efficiency and emissions.

The tragedy is that the oil companies didn’t increase the octane rating to 95 as originally planned, due to cost reasons, and have stuck to 91 octane – the same as BS4. The low octane penalises fuel economy and performance by as much as 3-4 percent.

How diesel engines are upgraded to BS6 norms

For diesel engines to jump from BS4 to BS6 is a herculean task. BS4 regulations were easy on diesels and didn’t call for any after-treatment system, but to meet BS6 standards, the engines will need both, a DPF (Diesel Particulate Filter) and NOx treatment. It’s because diesels, unlike petrols, produce high levels of PM and NOx, and to achieve the 82 percent and 68 percent reduction, respectively, of both these pollutants, sophisticated hardware is needed. It’s this hardware that has seriously shot up costs, especially for bigger diesels. 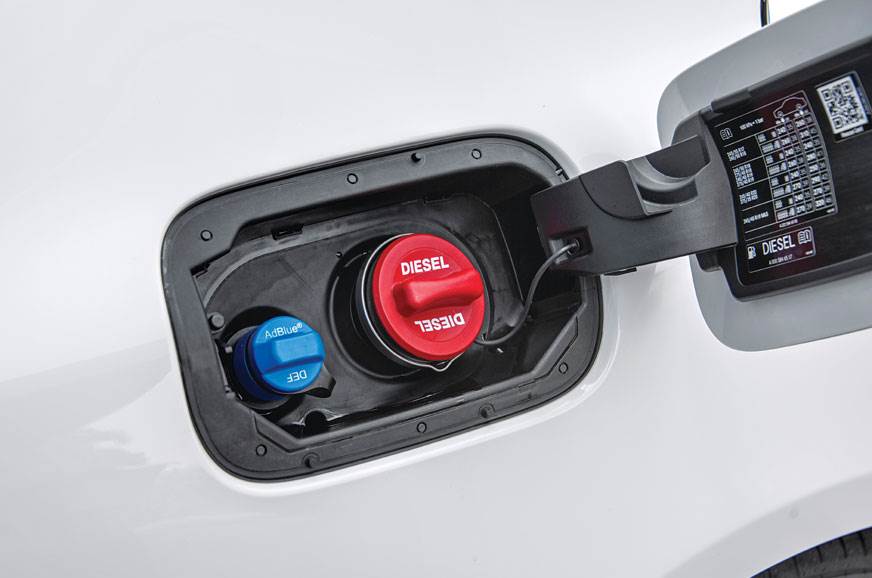 For NOx reduction, all diesel engines above 2.0 litres need Selective Catalytic Reduction (SCR), which is a clever emissions control system that injects ammonia-based urea, or what is called Diesel Exhaust Fluid (DEF), into the exhaust. The ammonia in the fluid triggers a chemical reaction that essentially converts NOx into harmless nitrogen and water. SCR technology alone can achieve NOx reductions of up to 90 percent and allows diesel engines to comfortably meet the norms. However, the DEF needs regular replenishment, and hence all SCR-equipped cars have an onboard DEF tank that’ll need to be topped up every 10,000km or so, depending on the usage. This can be done when the car goes for a routine service, or at a fuel station. Trouble is that SCR systems are hugely expensive and add over Rs 1 lakh to the cost of the car, threatening to price them out of the market. Hence, it’s only on big, expensive cars and SUVs that SCR is viable.

The technology that mainstream Indian car companies are banking on is a Lean NOx Trap (LNT) because it’s a cost-effective solution that’s much cheaper than SCR. A cannister placed downstream of the engine’s exhaust manifold traps NOx as the name suggests. When the cannister or trap fills up, a richer fuel mixture is injected into the engine, and that reacts with the NOx, converts it to harmless nitrogen, and is then expelled from the LNT into the exhaust system. 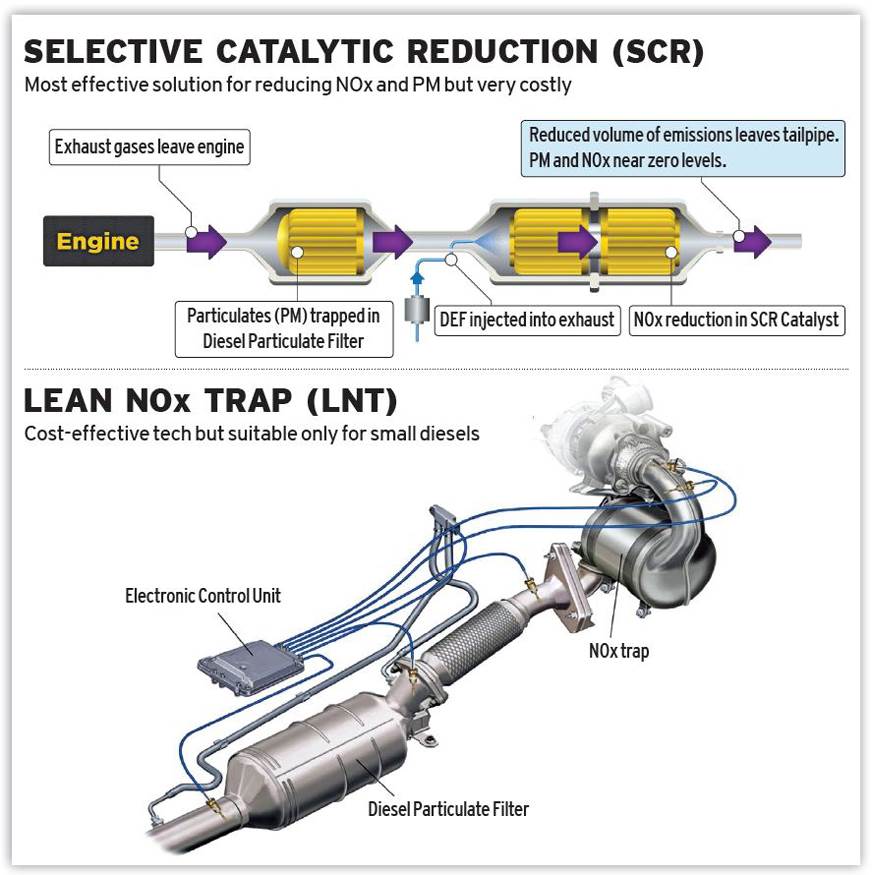 This technology, however, is a suitable solution only for small cars with small engines. A general rule is that the limit for LNT is in cars with engines up to 1.5 litres and a body weight of under 1,500kg. Since LNTs use very expensive precious metals, and the size of the LNT catalyst is proportional to the size of the engine, this tech becomes too costly for big engines. Also, the technology is not as effective as SCR, and the emission levels can be close to the limits, leaving very little margin. This is one reason why Renault didn’t take the LNT route for its K9K engine, as, in certain conditions, the emissions levels could cross the limit. An SCR would have given Renault enough tolerance but the costs would have priced the Duster and Captur out of whack.

Interestingly, the Kia Seltos and the upcoming, new Hyundai Creta are betting on LNT, but rivals feel using this tech on midsize SUVs is risky. Not just because LNT is on the edge of the emission limits, but because LNTs are susceptible to sulphur poisoning. So when the Seltos was launched last year – when only BS4 diesel (which has five times more sulphur than BS6 fuel) was available – it did raise eyebrows in the engineering fraternity. Kia, however, says it’s done enough testing and is confident the LNT is hardy enough to run on BS4 fuel for a limited period – that is until April, after which low-sulphur BS6 should be available pan-India.

The DPF, the other main piece of hardware in a modern diesel, also located in the exhaust system, and usually before the SCR or after the LNT, doesn’t like sulphur either. Excessive sulphur can clog the filter, but it can be burned off by running the engine at high speeds or by active regeneration – a method that involves spraying neat, unburnt diesel through the cylinders into the exhaust manifold to light off the DPF. The higher sulphur content in BS4 fuel means the DPF has to be regenerated or cleaned more frequently.

In the next part of our BS6 special, we take you through how the norms will affect you and which engines will be gone for good. Click hereto read ourBS6normsspecial: part 3 – the enginesBS6killed.