We’ve exclusively got the BS6 Kicks’ official ARAI fuel-efficiency figures. Here’s how it compares to its rivals. 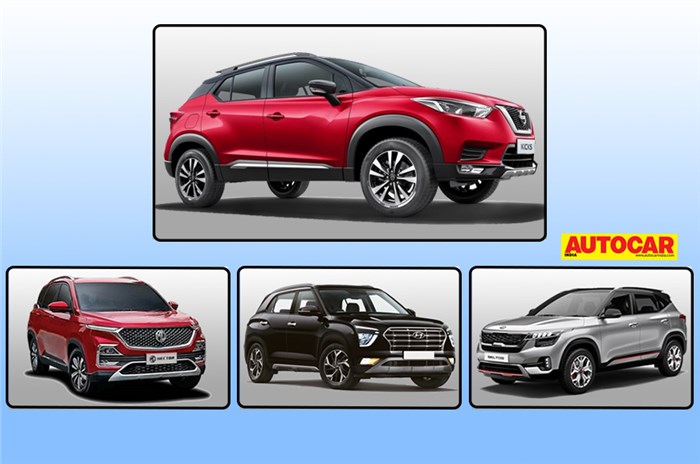 Ever since Nissan India confirmed its BS6-compliant Kicks will come with a 156hp, 1.3-litre turbo-petrol engine, anticipation has been high. More information regarding the updated Kicks has surfaced online via leaked brochures; but now we’ve exclusively got our hands on the official ARAI fuel-efficiency figures for the BS6 Kicks’ 1.5-litre naturally-aspirated (NA) petrol and 1.3-litre turbo-petrol engines. The 106hp, 1.5-litre naturally aspirated petrol engine is only available with a 5-speed manual gearbox and is rated at 13.9kpl – a decrease of 0.33kpl compared to its BS4 version.

Meanwhile, the Kicks with the new 1.3-litre turbo-petrol engine is available with 6-speed manual and 7-step CVT automatic gearbox options. The manual version has an ARAI-certified 15.8kpl figure while the BS6 Kicks automatic is expected to have a similar rating.

In isolation, these figures seem adequate. However, we’ve lined-up the BS6 Kicks with its rivals on paper to find out where Nissan’s updated SUV stands in terms of fuel economy.

How does the BS6 Kicks fare against the Creta, Seltos and Hector on mileage?

Coming to the turbo-petrol engine options, the BS6 Kicks 1.3 is the most powerful of the lot, despite having a smaller-capacity unit. It even outpowers the MG Hector’s 1.5-litre turbo-petrol engine by 13hp and 4Nm of torque. However, the Kicks with the turbo-petrol engine and manual gearbox is down on the Korean SUVs in terms of fuel efficiency – the Creta turbo’s rating is 1kpl higher while the Seltos is 0.7kpl higher. Without mild-hybrid assist, the petrol-powered Hector with either the manual or automatic is the least fuel-efficient SUV here. With the mild-hybrid system, the Hector’s ARAI fuel-efficiency figure equals the BS6 Kicks turbo.

It will be very interesting to see how the updated Kicks is priced, as the buzz is that Nissan is looking to price the SUV competitively. As we previously reported, there will be a total of seven versions of the BS6 Kicks on sale.

To give you an idea of how the Kicks could be positioned against its rivals, take a look at the table below: