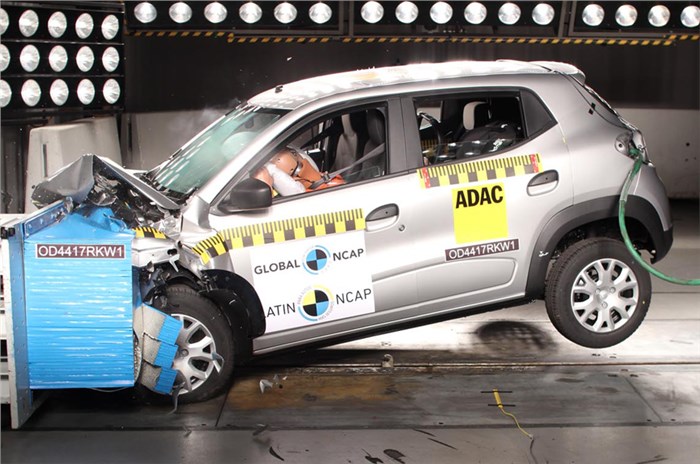 The score is better than the India-spec Kwid, which got one star in Global NCAP’s crash test last year.

The made-in-Brazil Renault Kwid has scored a three-star rating in the Latin NCAP (New Car Assessment Programme) crash tests. The result shows that the hatchback has improved on the safety front.

The Renault Kwid that is made in India had scored an abysmal one-star in Global NCAP’s crash tests held in September 2016, which was still an improvement over the zero-star rating the hatchback was awarded during the May 2016 tests.

The Kwid’s side impact structure prevented the intrusion of the side impact barrier, which combined with the side thorax airbag, could help keep injuries below the life threatening levels.

Child occupant safety was also deemed adequate thanks to the child seat mounted on the Isofix seat mounts and Top Tether anchorage. However the lack of an airbag disconnection switch in the front passenger area and lack of 3-point seat belts brought the rating to a three out of five.

In terms of safety features, the Kwid in India misses out on the Brazilian versions’ passenger side front airbag and side airbags, along with the Isofix child seat mounts.