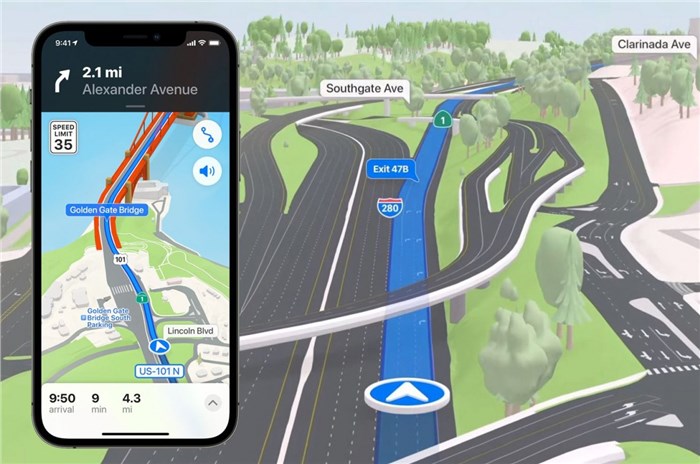 At its annual World Wide Developer Conference, Apple announced a major update to Apple Maps, bringing in augmented reality (AR) and three-dimensional (3D) features. The update to Maps is part of the larger upgrade to Apple’s new iOS 15 operating system.

With the updated Apple Maps, users will now be able to experience cities with significantly enhanced details for neighbourhoods, commercial districts, elevation, buildings, new road colours and labels, and custom-designed landmarks. Apple has also introduced a new night-time mode with a moonlit glow for Maps.

Furthermore, when navigating using an iPhone or the in-car Apple CarPlay, Maps will now feature directions and landmarks in 3D which will help users see better and understand important details like turn lanes, medians, bike lanes and pedestrian crossings. With Apple CarPlay, the company has also added the ability to announce incoming messages via Siri.

With the update, users can now even get directions in AR. For this, the user has to point their iPhone’s camera to a point of interest in their surroundings and then Maps will provide detailed walking directions in augmented reality. However, this feature will only come to select cities in the US – London, Los Angeles, New York, Philadelphia, San Diego, San Francisco and Washington DC – by the end of this year.

For those using public transport, Maps can now find nearby stations more easily and even pin favourite lines of the user. Maps will automatically follow along a selected transit route and will notify the user when it’s nearly time for them to disembark. Users can even keep track of this on their Apple Watch.

The new AR mapping and navigation features are coming to iOS devices with the launch of iOS 15, which is likely to be in September. However, Apple is yet to confirm if these features will be offered in India.