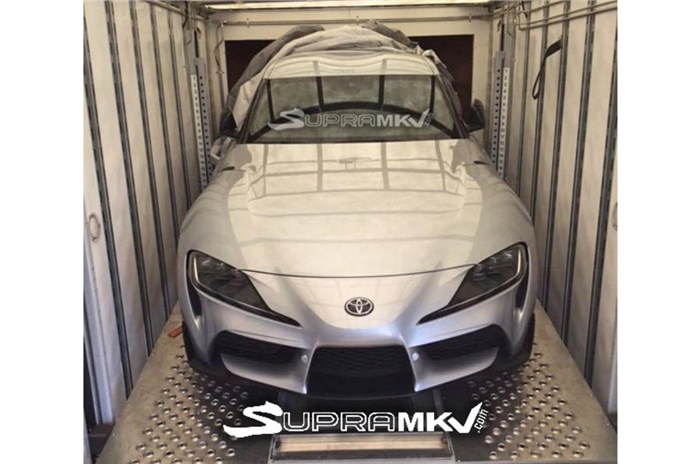 Toyota is set to introduce its all-new Supra at the Detroit motor show in January 2019. However, an image showing the uncovered car has emerged online.

The image which appears to be of the final production car shows that the revived Supra's front-end design will be in line with its previously shown concept and prototypes.

The 2019 model sees the return of the 'Supra' name after 17 years, the last time being in 2002. The development of this model began in 2012 and has taken place alongside the new BMW Z4, as one from a series of projects scheduled between Toyota and BMW.

Power for the Supra comes from a BMW-sourced, 3.0-litre, straight-six engine that puts out around 345hp and 475Nm of torque paired with an 8-speed ZF automatic transmission sending power to the rear wheels. The car also features a BMW M Active limited-slip differential and weighs around 1,500kg with a 50:50 weight distribution.

The build-up to this model's hotly anticipated launch has seen a series of leaks and drip-feed of information through a long gestation period. Previous images show three different wheel sizes for three different specifications, as well as the availability of turbocharged four-cylinder and six-cylinder engines.

The complete styling of the car is not revealed, so far, but key elements such as front lights, bumper, the dashboard with a digital instrument display, the rear bumper and splitter are all shown separately, giving more hints as to what the car will look like. The new model will also feature a distinctive, script-like Supra logo as seen on the previous-gen model.

First previewed by the FT-1 concept of 2014, the design of the next Supra is slightly toned down compared to its preceding concepts. While the FT-1's overall silhouette was familiar – maintaining the headlights, tail-lights and double-bubble roof – the car did away with aggressive features such as side air intakes and a fixed rear wing.

An earlier sighting of the Supra's interior showed BMW switchgear – including a dashboard-mounted infotainment screen and accompanying rotary dial controller on the central tunnel, as well as BMW heating control buttons and a BMW automatic gear selector. Toyota might fit its own parts to the final car's interior, but this sighting suggests the electrical architecture beneath will be based on BMW's systems.

Toyota also hinted at the performance focus of its upcoming sportscar with the reveal of a GR Supra Racing Concept at this year's Geneva motor show. That model was badged under the firm's performance arm, Gazoo Racing, and was a pared-back and more hardcore version of the Supra.
Toyota executives have previously revealed intentions to produce several Supra variants with many different power outputs. This suggests that this motorsport-inspired concept hints at a future range-topping version, likely to be badged 'GRMN'. The manufacturer is also likely to widely race the new Supra in sportscar championships worldwide.

A hybrid version of the car is also predicted to come as part of Toyota's tie-up with BMW. In fact, both the Supra and Z4 are due with electrified four-wheel-drive powertrains at a later stage. Both automakers are experts in high-performance hybrid power, with BMW having launched the i8 back in 2014 and Toyota competing in the World Endurance Championship and winning Le Mans with its TS030 Hybrid. Toyota's racing-derived, energy-storing supercapacitors are due to be fitted to the Supra to power its electrified drive hardware.