The Tata Harrier SUV has been launched in India and here are the top five things you must know about the new flagship that will take on everything from the Hyundai Creta to the Jeep Compass. 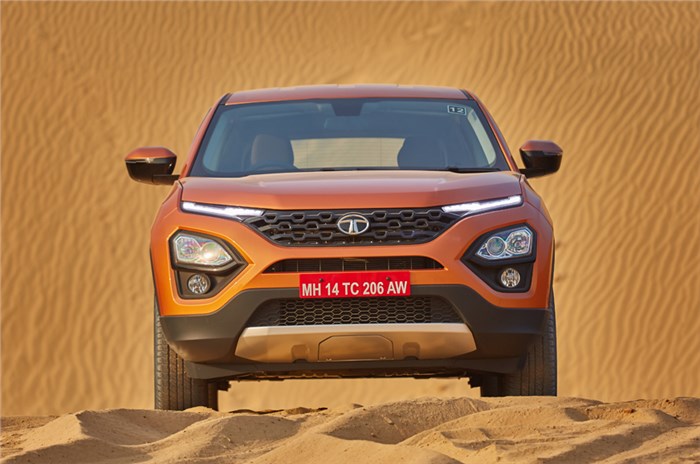 The all-new Tata Harrier has been launched in India and is one of the most anticipated SUVs of recent times. The new Tata Harrier takes on a range of SUVs from the Hyundai Creta, Renault Captur and the recently launched Nissan Kicks to models like the Jeep Compass and Mahindra XUV500. The SUV is also priced very aggressively, with the base model variant starting at Rs 12.69 lakh (ex-showroom, Mumbai). The Tata Harrier, currently available in four variants, is also larger than most of its competition and will also take on the likes of more premium SUVs like the popular Mahindra XUV 500 and even the Jeep Compass.

The Tata Harrier currently only gets one engine and gearbox option. The one on offer is a diesel engine that has been source from the Fiat Group and is essentially the same unit that’s found on the Jeep Compass. The 2.0-litre Multijet engine has been named ‘Kryotec’ by Tata Motors and is a four-cylinder, turbocharged diesel motor that makes 140hp of peak power and 350 Nm of peak torque. The Tata Harrier manual gearbox on offer is a 6-speed unit sending power to the front wheels. Tata Motors will also introduce a petrol-powered version of the Harrier in the near future and will also be equipping the SUV with a Hyundai-sourced automatic gearbox. While the Tata Harrier is currently a five-seater, the upcoming seven-seater version of the car will get a more powerful 170hp version of the same engine.

The Tata Harrier SUV gets two airbags as standard across all models. The top spec XZ variant of the Tata Harrier comes with six airbags, making it even safer. The SUV also gets safety systems like traction control, cornering stability control, electronic stability program, rollover mitigation and hill decent control, apart from the standard ABS and EBD. The Harrier marks the debut of the Indian automaker’s brand new Land Rover D8 architecture-derived platform called ‘Omega Arc’. The new Tata SUV Omega Arc Platform has better driving dynamics and torsional rigidity as compared to older platforms. As compared to Land Rover’s SUVs though, the Tata Harrier will not be getting an all-wheel-drive or a four-wheel-drive variant anytime soon.

The Harrier is one of the best-looking cars ever launched by Tata Motors and, as with the Land Rover-derived platform, the Land Rover DNA is quite evident in the design language too. The new SUV gets a very distinct design language as a part of Tata’s ‘Impact Design 2.0' theme, with higher-set LED daytime running lights flanking a large Range Rover-inspired grille. The headlamps themselves are set lower down in the bumper, along with the fog lamps. In profile, the Harrier looks quite unique too, especially with the chrome accents; and around the back, the sleek LED tail-lamps complete the look. We do, however, wish the wheels on the Tata Harrier were larger than the 17-inchers that it currently has, to better match those flared-up wheel arches.

The Tata Harrier SUV has an impressive exterior and an equally impressive interior too. The new SUV gets a well-appointed interior with a wood panel dashboard, and the top-spec model gets a free-standing, 8.8-inch touchscreen infotainment screen with inbuilt navigation and Apple CarPlay. It also comes with a 7.0-inch TFT semi-digital instrument cluster with an analogue speedometer console. Tata’s new SUV gets copious amount of leather, including on the seats and door panels, giving it a high-quality feel.

2019 Tata Harrier: Which variant should you buy?