The 5-door Gurkha will come in multiple seating configurations, including 6-, 7- and 9-seater versions. 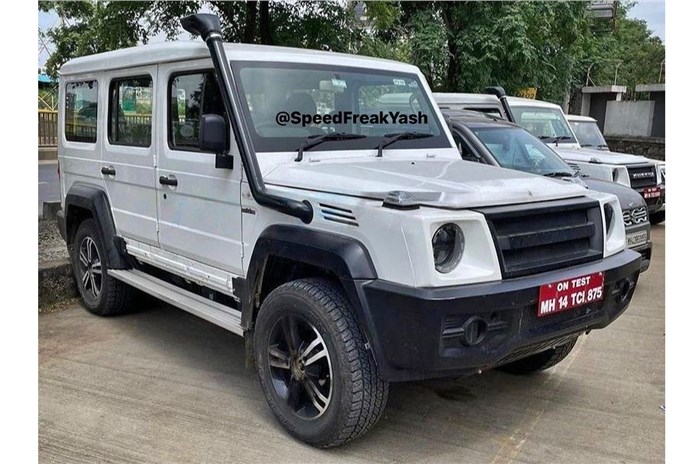 The five-door Force Gurkha, which has been in the making for a while now, has been spied testing once again – only this time completely uncamouflaged and in near-production guise. It looks largely similar to its 3-door sibling, save for the longer wheelbase and two additional doors.

The 5-door Gurkha doesn’t stray far away from the 3-door model it’s based on – the circular headlamps with LED daytime running lamps, the bonnet-mounted turn indicators, the blacked-out grille and the front bumper are identical on both models. Even the snorkel has been carried over as is.

It's when you move over to the sides that the differences become evident. Based on an updated version of the 3-door Gurkha’s C in C platform, the 5-door Gurkha is expected to have a wheelbase about 400mm longer. In fact, all body panels on the 5-door Gurkha post the B-pillar are new as the rear-quarter area and glass house have also been completely redesigned.

These spy pictures reveal that the production-spec 5-door Gurkha will ride on dual-tone 18-inch wheels shod with 255/65 road-biased tyres, although lower variants could get smaller steel wheels as has been spied before. In contrast, the 3-door Gurkha rides on 16-inch alloys with all-terrain tyres which are better suited to off-roading. Speaking of which, the longer wheelbase on the 5-door Gurkha will also reduce the SUV’s breakover angle over the 3-door model.

At the rear, the tail-lights and rear bumper have been carried over from the 3-door model, although the tailgate-mounted spare wheel will be larger in size.

The 5-door Gurkha will be carrying over the same Mercedes-sourced 2.6-litre diesel engine that does duty on the 3-door model, and will come mated to a 5-speed manual gearbox. We've covered the expected mechanical underpinnings of the 5-door model before, you can read it here.

Meanwhile, the 5-door model has been spotted with side-facing jump seats for the third row the first time in these spy images, which means it will come in multiple seating configuration. Previously, we have reported with spy images of the 5-door Gurkha where it was spotted with individual captain seats for both second and third rows.

Additionally, a bench-seat layout could also be in the offing, which means it will come in 6-, 7-, and 9-seater configurations. The 3-door Gurkha is only four seater with individual captain seats for the second row.

Seating configuration aside, we do not expect any changes to the 5-door Gurkha’s interior. It will likely carry over the same rudimentary dashboard design from the 3-door model with the highlight being an aftermarket Kenwood touchscreen infotainment system with Android Auto and Apple CarPlay. We do not expect any major updates to the equipment list either.

The 5-door Gurkha will not have any direct rivals in the market upon launch, which is expected around the festive season this year. However, come 2023, it will see its first competitor in the 5-door Maruti Suzuki Jimny as a hardcore ladder-frame off-roader that’s expected to debut at Auto Expo in January. The 5-door Mahindra Thar, expected to debut sometime in 2023-2024, will also join the list of rivals.