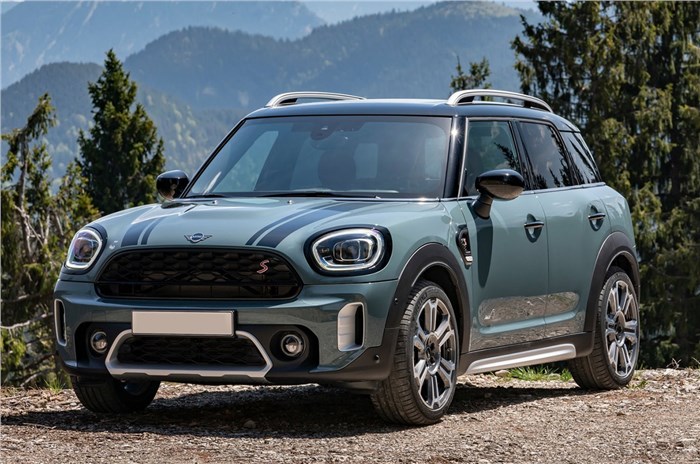 The 2021 Mini Countryman facelift has been launched in India with prices starting at Rs 39.50 lakh (ex-showroom, India). The updated Countryman is available only in the petrol Cooper S spec in a choice of two variants – the standard Cooper S and the Cooper S John Cooper Works (JCW) Inspired – and is being locally assembled at BMW’s plant in Chennai.

2021 Mini Countryman: Changes to the exterior

Compared to the previous version on sale in the India, the new Countryman gets some cosmetic updates to the exterior along with a revised equipment list. Up front the Mini SUV gets a revised nose with a new bumper along with a tweaked grille and LED headlamps. Round the back too, the bumper is new while the tail-lamps get the company’s trademark Union Jack LED motif. The JCW Inspired variant additionally gets a sportier look to the regular Countryman including sportier bumpers, a rear spoiler and larger 18-inch wheels compared to the standard car’s 17-inchers.

The cabin too gets a few cosmetic tweaks along with a revised equipment list. The standard Countryman Cooper S packs in kit such as LED headlamps, fog lamps, panoramic sunroof, powered tailgate, rear view camera, powered front seats with memory function for the driver, dual-zone climate control, infotainment system with a 6.5-inch display and Bluetooth connectivity and safety systems such as airbags, stability control and traction control to name a few.

Another point of difference is the upholstery with the JCW Inspired trim’s cabin finished in either brown or grey leather while the standard Countryman gets black leatherette upholstery.

The 2021 Countryman is available in the petrol Cooper S spec. Power comes from a 2.0-litre turbocharged petrol engine developing 192hp and 280Nm of torque. Power is sent to the wheels via a 7-speed dual-clutch automatic gearbox – DCT ‘Sport’ gearbox in the JCW Inspired. Mini claims a 0-100kph time of 7.5 seconds for the Countryman.

Mini is also offering an Absolute Value pack with the new Countryman till the end of June 2021. Under the pack customers can own the Countryman for a period of between 3 to 4 years against EMI payments and avail of a comprehensive aftersales package including service inclusive plus that covers the costs of replacement of select wear and tear parts, repair inclusive, assured buyback, and 20 percent discounts on accessories.

The updated Countryman goes up against small luxury SUVs like the BMW X1 and Volvo XC40 that are currently on sale in India. Other rivals will include the yet to launch second-gen Mercedes GLA and the second-gen Audi Q3.

Mini also looks to be lining up the launch of the facelifted Mini hatchback with a thinly camouflaged test mule of the Mini 3-Door having recently been spotted on Indian roads.