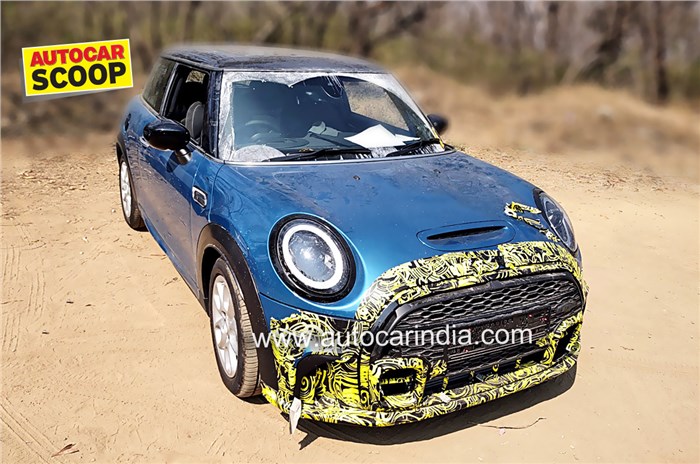 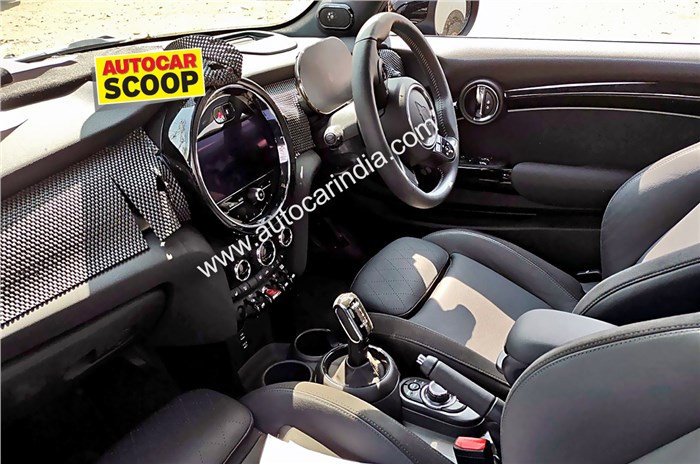 The 2021 Mini 3 Door hatchback that was recently unveiled overseas, has been spotted testing in India. Mini revealed the updated line-up of its iconic hatchback – 3 Door, 5 Door, Convertible and the EV – in international markets bringing in styling updates and revised equipment lists.

As is evident on the testmule, the most noticeable change to the front is the large front grille that seemingly stretches almost to the base of the bumper. While the car revealed in international markets featured a closed body coloured section in the centre housing the numberplate, this section in the test car is in the same pattern as the grille though still closed off.

Lower on the bumper sit prominent vents while further to the side, the fog-lamps available on the older model seem to have been done away with.

Round the side not much is visible as far as cosmetic changes go, though Mini does say that the wheel arches get revised contouring. Round the back the car gets a revised bumper. The tail-lamps with the Union Jack LED elements are carried forward.

The image of the interior reveals a few cosmetic changes, the most notable of which is a new free-standing digital instrument cluster replacing the analogue dials. Also revised is the gear-lever. Little else seems to be different with the centre console continuing to feature a circular upper section housing the infotainment screen under which sits the air-con controls and aircraft-inspired toggle switches. The test car also seems to have the provision for a heads-up display though we can’t confirm if it will be available as a standard fit or as a paid option.

As before, expect a lengthy list of options to choose from ranging from seats and upholstery to the infotainment system and more.

Mini made no changes to the engine line-up on the international Mini 3 Door. Presently, the standard Mini hatchback in India is available in 3 Door and Convertible body styles in its Cooper S spec powered by a 192hp, 2.0-litre turbo-petrol engine. One can expect the updated Mini to carry forward using the same engine option paired to a 7-speed dual-clutch automatic gearbox.

While there is no confirmed date yet, one could expect Mini to eventually roll out the updated model in India with the 3 Door and Convertible both imported as CBU units. Aside from the hatchback, Mini also offers the larger Countryman SUV and the Clubman in India.