2018 Honda Jazz: Which variant should you buy?

The 2018 Honda Jazz is available in petrol-manual, petrol-auto and diesel-manual combos, with up to 3 trims. But which one makes the most sense? 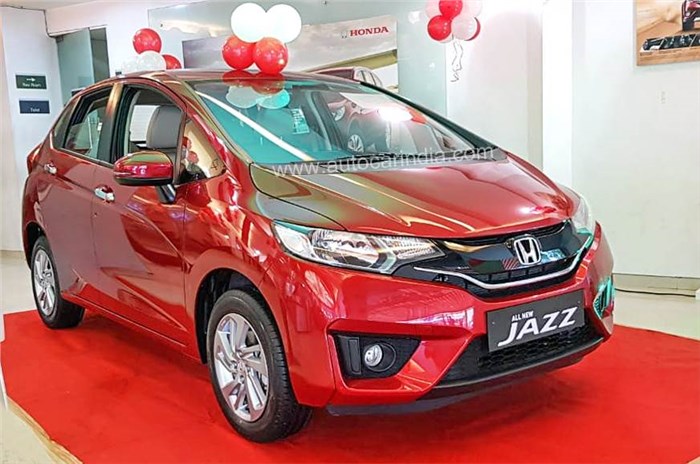 The revised-for-2018 Honda Jazz has arrived with the subtlest of visual styling tweaks and only few feature additions to speak of. The engine-gearbox options carry on unchanged as well. However, with Honda having re-jigged the variant line-up, it’s worth checking what you get for your money and figure which version of the Jazz makes the most sense.

What are the engines on offer?

As before, the Jazz is offered with a 1.2-litre petrol engine that develops 90hp and 110Nm (mated to either a 5-speed manual or a CVT automatic) and a 1.5-litre diesel that produces 100hp and 200Nm of peak torque (mated solely to a 6-speed manual).

The petrol engine isn’t the liveliest at low speeds so you’ll have to work the manual gearbox in town. Performance get better at higher engine speeds, though. Still, it’s the petrol automatic that’s our pick of the Jazz range. The CVT is well in tune with the characteristics of the engine and offers easy progress in town. Paddleshifters to shuffle through the 7 steps of the transmission add a bit of driver involvement too.

The diesel engine offers good low-speed performance but on the whole is an unexciting. Also, the diesel engine is noisy even by diesel engine standards. Still, given the engine’s incredible efficiency it makes sense for anyone who does long distances frequently.

Honda has trimmed the variant count on the Jazz, and has done away with the entry E and mid-spec SV trims altogether. Thankfully, the petrol auto is now available in fully-loaded form for the first time. The petrol Jazz is offered in V and VX trim (though the manual misses some features available on the auto) while the diesel is available in S, V and VX trims.

The diesel-only S trim (Rs 8.05 lakh) gets kit such as two airbags, ABS with EBD, rear parking sensors, 15-inch wheels with covers, LED tail-lamps, an audio system with four speakers and a 3.5-inch screen, steering-mounted audio controls, driver's seat height-adjust, a front-centre armrest, rear defogger, electrically adjustable wing mirrors, power windows and central locking with keyless entry. The mid-spec V variant (petrol manual - Rs 7.35 lakh/ petrol auto – Rs 8.55 lakh/ diesel – Rs 8.85 lakh) is equipped with 15-inch alloy wheels, front fog lamps, a rear wiper, beige interiors, an automatic climate control system, a 5.0-inch touchscreen infotainment screen that doubles as a reverse camera display. The diesel and petrol-CVT versions also get a push-start button and cruise control while the CVT-equipped model gets paddleshifters as well. What is a disappointment is that these features are not part of the kit on top-spec petrol VX cars either. The top-spec VX (petrol manual - Rs 7.79 lakh/ petrol auto – Rs 8.99 lakh/ diesel – Rs 9.29 lakh) comes with extended LED tail-lamps, power adjustable and folding wing mirrors, a 7.0-inch touchscreen system with navigation, Apple CarPlay and Android Auto, and leather on the steering wheel and gear knob. Unfortunately, Honda has done away with the flip/fold flexible ‘magic seats’ at the rear offered on the VX in the past.

Which is the version to buy?

The Jazz automatic is the best version of the Honda hatchback on sale. While the VX does offer the most in terms of kit and is the one we’d recommend if budget is not a constraint, it is pricey. In effect, the petrol CVT in V trim is the smart pick offering the convenience of an automatic with most, if not all, of the features you would want for sensible money.