We take Suzuki’s maxi-scooter out for a quick spin to see how well it fares on Indian roads. 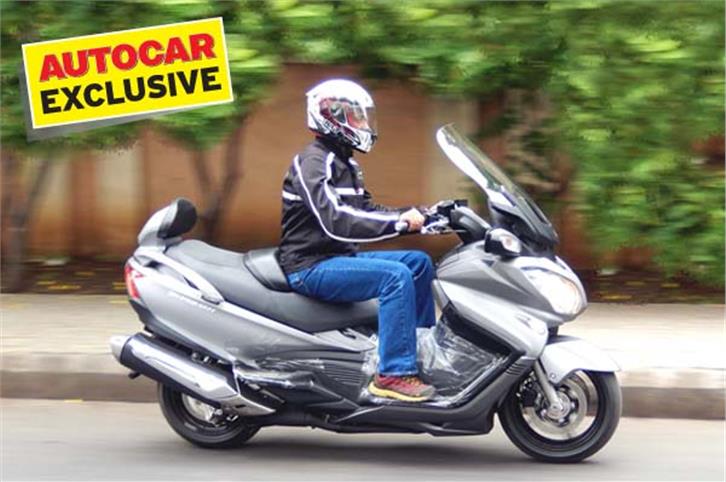 India has had a colorful history with scooters. Way back in 1948 just post independence, Bajaj imported the first set of Vespas into the country. Since then, this market has seen its fair share of ups and downs. Bajaj ruled the roost for the longest time with its scooters, and LML with Piaggio made them fight tooth-and-nail to keep their stranglehold on the market. Then came a dark cloud in scooter sales with the Japanese motorcycles coming in and decimating the geared scooter segment, which was reduced to a very minor share in the late 80’s and all through the 90’s.

Which brings us to the post 2000 era, when Honda brought scooters back from the dead, to emerge on top with its Activa, which raked in sales like never before. This is the story of the commuter segment though, and then there is the maxi-scooter segment, still waiting to be explored in India.
Suzuki is thinking about and exploring ways to bring in their well equipped, top-of-the-line scooter, the Burgman 650 Executive ABS. Still in the stages of surveying the market, Suzuki has imported this particular scooter for market feedback from prospective customers, and we’ve just managed to take a ride on the gentle giant.
The Burgman scooter makes quite an impressive looker. It has a long, swooping profile when looked at from the side, and a muscular, yet not overwhelming profile when seen from ahead. The big Burgman has twin headlamps mounted on a smartly turned out apron. Mounted above these is an electrically adjustable windscreen, which provides excellent wind and rain protection. The rear view mirrors integrate turn signal indicators, and are electrically operated as well on this premium scooter.
Behind the windscreen sits a broad instrument console, part digital and part analogue, with the speedometer and tachometer read via needles, while other information such as fuel level, ambient temperature, time and temperature readings are displayed via an LCD panel. Mounted on the shrouded handlebars are the scooter’s control buttons, which have a meaty feel to them, and work with good feel.