These are the Swedish company's first products for India. We find out if the KTM 250 Duke-derived Husqvarnas have what it takes to lure the premium motorcycle buyer. 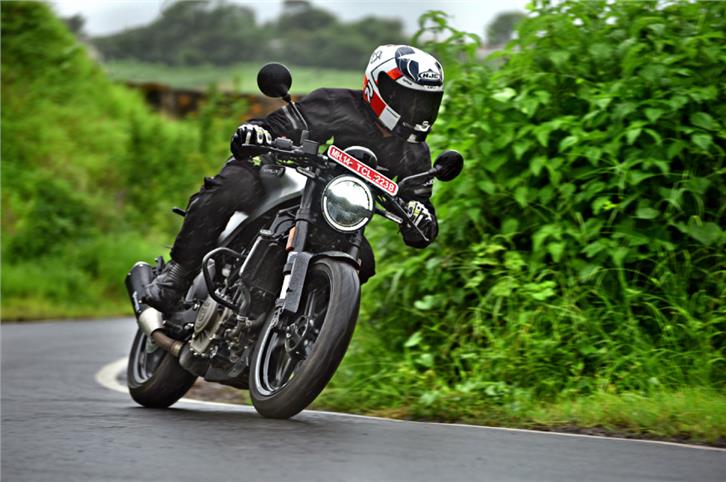 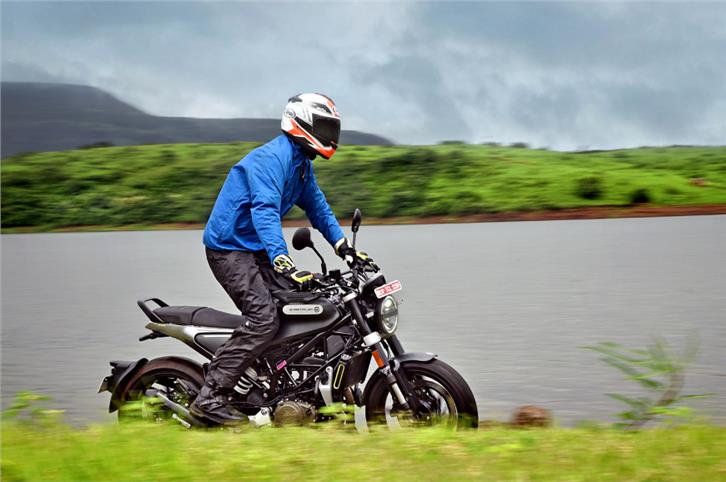 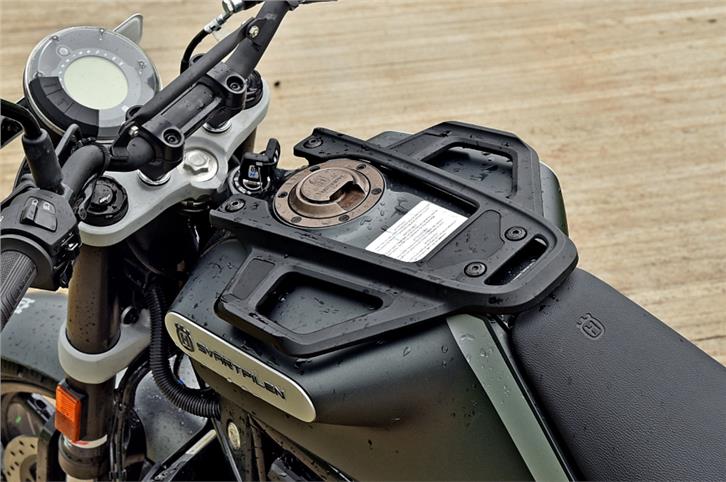 Understated elegance. I think if there was a term that could be attributed to Swedish designs, that would ideally be it. We've already seen the beauty of Scandinavian lines on some of the Volvo cars that ply on our roads. And now, for the first time, we can witness the same on two-wheelers, in the form of Husqvarna motorcycles. There is no denying that the Husqvarna Svartpilen and Vitpilen 250s caught our attention from the moment they were unveiled at IBW 2019. We've never seen anything like them in our country, which makes us all the more excited. But are these Huskies all show and no go? Let's find out.

There is a saying: “When it comes to aging gracefully, simplicity is key.” Like fine wine, if you will. This is the cornerstone of the Svartpilen and Vitpilen designs. There's no over-the-top, smorgasbord of cuts, creases and graphics. What you see instead is silky-smooth surfaces, with elegant lines and thoughtful addition of stickers to highlight and enhance the appearance of said lines. 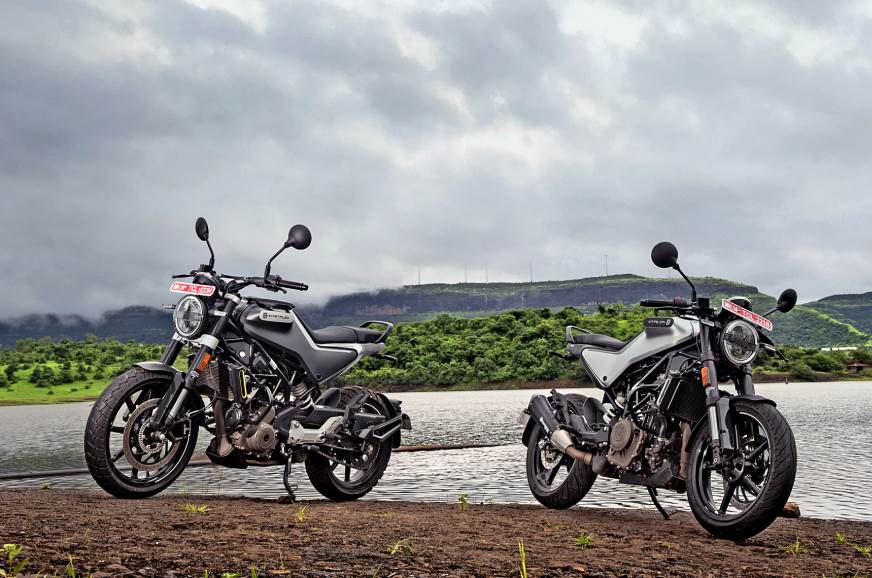 Viewing the motorcycles from the side gives you the impression that the bodywork is made of two pieces only. The plastic panel that forms the cover of the fuel tank extends to form the side panel, while the tail section is the other half that meets it almost at the centre, like an inter-locking jigsaw.

The tail section is sleek and minimal, with a neatly integrated LED light, while the number plate sits on the tyre hugger that has an unusually thick metal stay for better rigidity than a plastic unit. We won't be surprised to see owners take the hugger off and find a way to bolt the number plate under the tail-lamp to create a nice, tail-tidy effect. But for now, this system does a reasonably decent job of keeping muck off the rider’s back, although some splatter does fall on the pillion seat. And while at it, the super-clean design deserves being freed of the pillion grab handle.

Overall, I think Husqvarna has clearly shown the world that simple, yet flowing lines can effortlessly make a motorcycle look good. And this feeling is only enhanced when you take a look at the attention to detail that lends both motorcycles a distinct identity, despite being based on the same platform.

The Vitpilen is modelled as a café racer – and hence the clip-ons and corresponding rear-set foot pegs, for that quintessential stance. It is definitely the cooler-looking of the two and despite what the committed ergonomics suggest, it is not severely uncomfortable to ride around for short durations. The Svartpilen, on the other hand, bears styling cues inspired by Scramblers; and thus, it has a relatively upright riding position, a one-piece handlebar with a crudely welded brace, a plastic-tank bag rack, and split seats (the Vitpilen gets a single seat with a slightly more pronounced step for the pillion section). The Svart also gets a different alloy wheel pattern, and wears dual-purpose, MRF Revz FD rubber as opposed to the MRF Revz C1 tyres on the Vitpilen's five-spoke alloys. 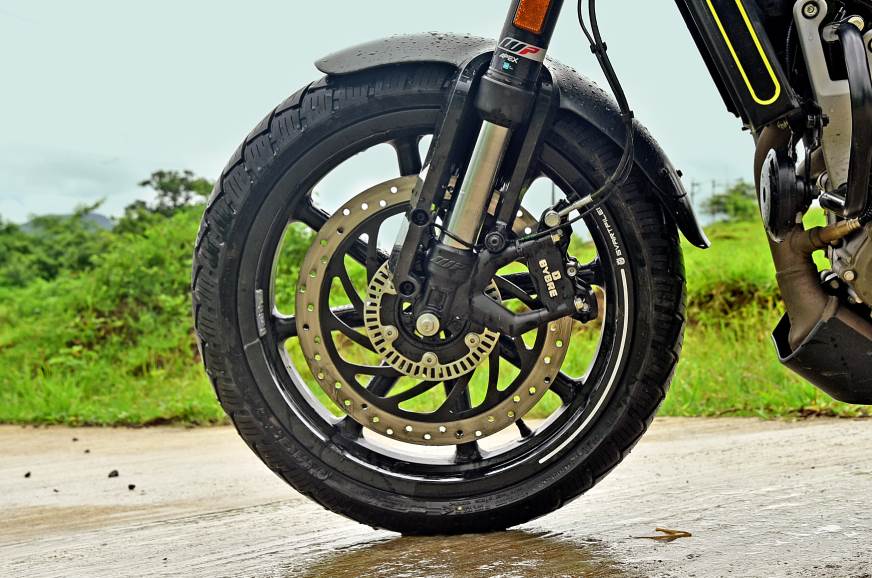 These little differences aside, both motorcycles look equally stunning and some bits – like the bronze fuel cap with the embossed Husqvarna crown logo, the neon yellow stitching on the seats, the single pod LCD cluster, and the classic round headlamps with integrated DRLs – enhance their appeal manyfold.

To me, the styling alone is going to seal the deal for most buyers, although I have to say that the penalty of such a design is that it leaves little room to tuck away cables neatly. That is the only negative part about the motorcycles' appearance as these wires look unsightly, snaking behind the steel-trellis frame. Speaking of the frame, the Svartpilen and Vitpilen are based on the KTM 250 Duke and hence share the same main frame. The subframe, however, is different to accommodate the relatively lower tail section. The other, more important component that it shares with its Austrian cousin is the engine. 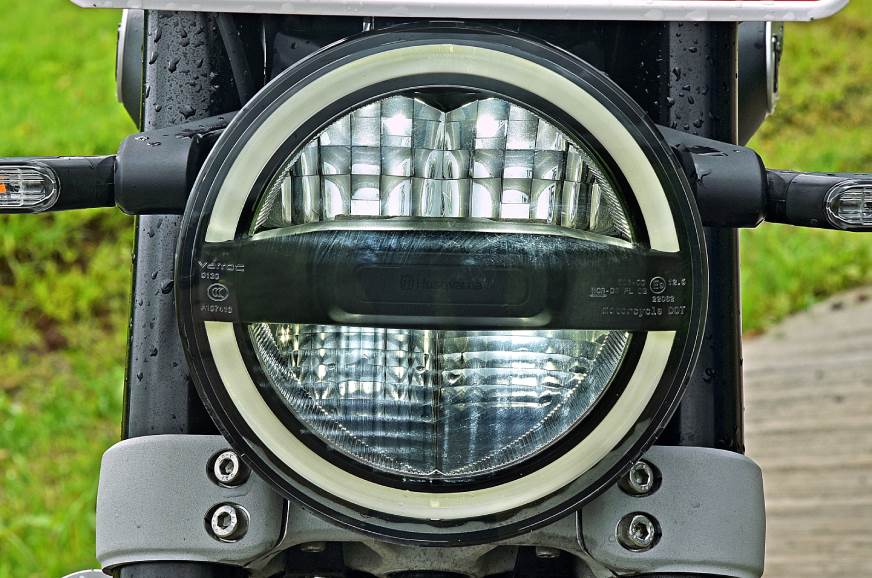 Classic round headlamp with integrated DRLs is common on both motorcycles.

The 250 Duke's 249cc, liquid-cooled single and the same gearing gels with the fun and playful nature of the Huskies. This engine is eager to rev, with the meat of the powerband sitting in the mid- and top-end of the range. Which means that it only begins to come alive post-4,000rpm, with a notable surge after 7,500rpm, and all the way to the limiter. Personally, I don't mind this, as I like engines that rev with a sense of urgency; and working the gearbox keeps you engaged while riding the motorcycle. On the flip side, the weak bottom-end will require more gearshifts while riding at low city speeds; but that's hardly an issue, as the 6-speed gearbox is smooth to operate. 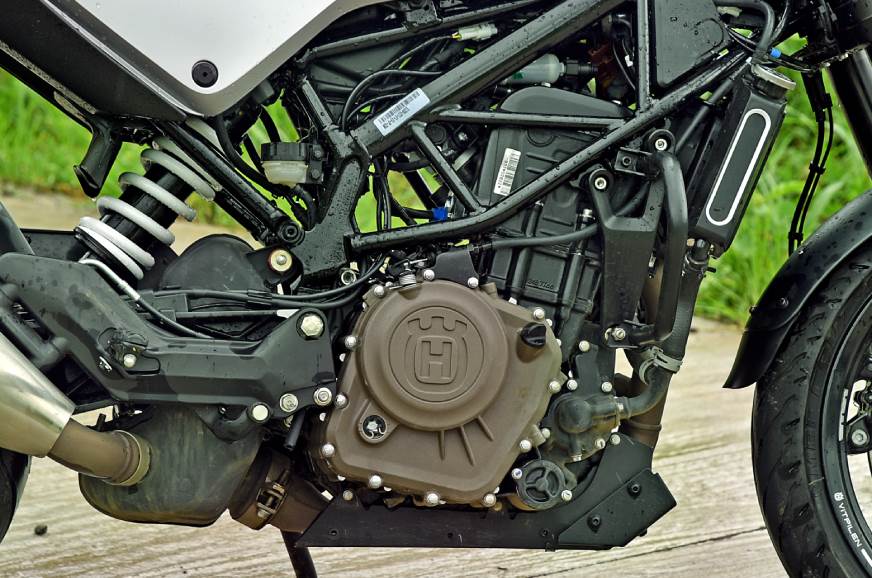 The Svartpilen and Vitpilen share their engines with the KTM 250 Duke.

The combination of the 30hp/24Nm engine and the light weight results in decent performance for a 250, with both motorcycles taking about 9.25sec in our 0-100kph acceleration tests. It’s worth mentioning that this is on par with the Suzuki Gixxer 250 – a bike that’s 3.5hp down on power. Nevertheless, the engine in the Husqvarnas is powerful enough for city riding and the weekend highway blasts. However, you would prefer the Svartpilen's relatively relaxed ergonomics for spending long hours in the saddle.

One thing you'd have to contend with is the engine's inherent buzzy nature, something that can be felt in the seats, bars and pegs. On the Svartpilen, the single-piece handlebar setup does a better job of isolating the rider's palm from the vibrations, but the Vitpilen’s rigidly mounted clip-ons transmit all the sensation to your hands. In fact, sustained high-speed rides on the café racer will leave you with a tingling sensation in the palm – but it's not to the point of being prohibitively bothersome. You could, at a stretch, pass that off as a characterful trait about the Vitplien, especially when you discover the way it handles around corners. The Vitplien's committed riding position puts you in tune with the motorcycle; and coupled with the firm yet comfortable setup of the WP Apex suspension, results in a terrific time around the bends. Also, the MRF Revz tyres offer sufficient grip once warmed up, egging the rider to push harder around bends. The Svartpilen is not too far behind and is equally engaging to ride around twisty roads, aided by the greater leverage offered by the wider handlebar. The surprising bit was that despite being shod with block-pattern tyres, the grip levels were impressive, even on thunderstorm-soaked tarmac. However, the blocks on the rear tyre are bigger and more spaced out than those on the Svartpilen’s front, and this results in a slightly unusual feeling when the bike is leaned over – it’s not worrying, but it is something you will have to get used to. The ride quality is comfortable enough at high speeds. However, one does feel a minor jolt while riding over ruts and potholes at medium to low speeds. It’s similar to the KTMs in this respect, and not jarring in any way. As for off-roading, the Svartpilen’s riding position is just like the KTM Duke’s, in that it is very street oriented; it has just 149mm of ground clearance, and the rubber foot pegs have no grip when they get muddy. Safe to say, it’ll go about as far as you would with a KTM 250 Duke!

While the handling and ride is good, the braking performance is decent too. However, the front brakes lack the same bite you’ll find with the KTM 390 Duke and RC 390, while both use the same 320mm front disc set-up. You should be able to solve this by installing the more expensive sintered pads that come with the 390s. Many questioned Bajaj's decision to launch the Husqvarna brand in India with the Svartpilen and Vitpilen 250 instead of their Husqvarna 401 cousins, as was widely speculated. But after riding these motorcycles, it is clear that the intent behind launching the 250s is to introduce the Husqvarna brand to a wider audience by making it accessible, while offering KTM levels of performance. At Rs 1.84 lakh (ex-showroom, Delhi), the Svartpilen and Vitpilen 250 – which are retailed out of the KTM network – undercut the KTM Duke 250 by Rs 25,000, while bringing attractive Swedish design, detail and uniqueness to the table. This alone will pique the interest in young motorcyclists’ minds and it is pretty clear that the 250s will set the ball rolling for Husqvarna in India.