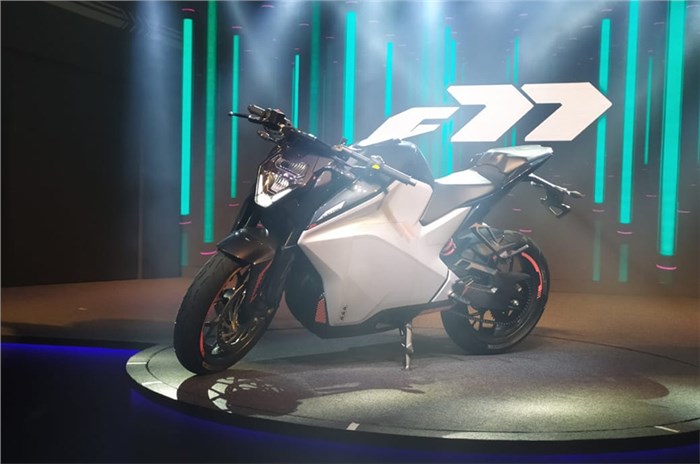 The F77 is priced between Rs 3-3.25 lakh. Online registrations begin today, with deliveries set to begin in the third quarter of 2020.

Back in February, we rode the final prototype of the Ultraviolette and you can read all about that here. Its technical details were not revealed until today, and here’s what’s on offer. The F77 is powered by an air-cooled motor that the company claims produces a max power output of 25kW (33.5hp) at 2,250rpm and an impressive peak torque of 90Nm. The company says that this enables the F77 to achieve a 0-60kph time of 2.9sec, a 0-100kph time of 7.5sec, and that the bike will be capable of a top speed of 147kph – some very admirable figures. It will also come with three power modes – Eco, Sport and Insane.

Powering the motor is a battery with a maximum capacity of 4.2kWh. It uses three slim lithium-ion battery packs and the entire unit takes 5 hours to charge fully via the standard charger, while the fast charger will do it in 1.5 hours. Ultraviolette has revealed that the F77 doesn’t require all three battery packs to run, but it performs optimally with all of them in use. On a full charge, the F77 has a claimed range of 130-150km. The battery system also comprises a comprehensive list of safety, thermal and battery management features, some of which are patented technologies.

The F77 uses a steel trellis frame with an aluminium head suspended on a USD fork and pre-load adjustable monoshock. It also features a 320mm front disc and a 230mm rear disc with dual-channel ABS. Considering its performance-oriented intentions, it gets steel-braided brake lines and 110/70 R17 (front) and 150/60 R17(rear) tyres – a configuration that’s also seen on some other sporty ICE bikes in the segment.

The Ultraviolette gets a TFT display as standard and it can be connected to an app that gives you a host of information and allows for customisation. From what Ultraviolette has revealed about the app, it will be one of the most intelligent systems we've seen on a motorcycle sold in our country. The F77 will feature a 9 DOF (Degree of Freedom) Inertial Measurement Unit (IMU) and will be able to share information with the app about how much power and torque are being transmitted at any given point of time; it can even show how much braking force and lean angle you are carrying into a corner.

The company has also revealed that the F77 will come with accessories like a portable fast charger, crash guards, panniers, and a different visor. The bike is also quite light, with a kerb weight of 158kg, and has an accessible seat height of 800mm.

Registrations for the F77 have begun today and deliveries are set to begin in the third quarter of 2020, with initial sales planned exclusively for Bengaluru.