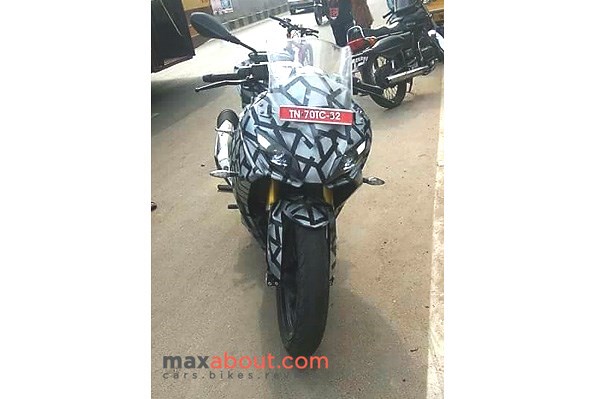 With the launch of the highly anticipated TVS Apache RR 310S right around the corner, more spy images have given us a closer look at the bike.

There’s no denying that the TVS Apache RR 310S, formerly known as the Akula 310 in concept form, is one of the most highly anticipated motorcycles of 2017. Spy images of test bikes have been flowing in since September last year, almost making us believe that TVS is more than happy to fuel the hype train. Surprisingly, images of the near-final production version reveal that not too many things have been drastically altered from the concept that was shown off at Auto Expo 2016. And as more spy images come in, it just leads us to confirm exactly how the RR 310S will be equipped once it rolls out.

These new images again show the bike wearing manufacturer camouflage. However, previous un-camouflaged shots have shown the bike painted in a lovely solid blue shade, reminiscent of Suzuki, without any decals to speak of. However, since it was devoid of any badging, we can assume that we’ll see the graphics only in the final production version of the bike. That being said, as witnessed on the Apache RTRs, TVS has solid paint work over too many graphics and it’s very likely that this aesthetic will be carried over on the Apache RR 310S.

The fuel tank seems quite tall and muscular, and the front fairing also gets a liberally-sized windscreen, which should provide adequate protection against wind blast. The layout of the bike's twin headlights bears a passing resemblance to the older-generation Honda CBR600RR, but it could just be the angle of the shot that’s giving this impression. There’s also a massive tail light unit with a striking look that seems like it could give the bold design choice of the Bajaj Pulsar RS200’s tail light a run for its money.

From these as well as the earlier spy images, it is clear that the bike gets LED daytime running lights, as well as HID projector headlights, although it’s not known at this point whether LED headlights will be offered or not. Around the back, we can see the distinctive shape of the tail light that looks like an upside-down Omega symbol (or the Devil’s horns, as some of our colleagues have pointed out).
Just like on the concept model, the final instrument cluster features a vertical design and is an all-digital affair. The bike does get clip-on handlebars; however, they seem to be mounted slightly tall. As is clear from one of the new spy images, the riding position is far from aggressive and might even be very conducive for long-distance touring.

Golden-coloured upside down forks are clearly visible up front and there’s a disc brake setup at both ends. The front disc appears to be a 290-300mm sized petal-type rotor with radially-mounted caliper, while the rear isn’t all that visible in the spy shots. In these new shots, an ABS ring isn’t visible on the brake rotors, but going by the spy images we’ve seen previously, the bike will be equipped with dual-channel ABS when it goes on sale. What is clear though is the fact that the Apache RR 310S is shod with Michelin Pilot Sport radials.

No mechanical details are known at this point except for the fact that the Apache RR 310S will get the same 313cc, liquid-cooled, single-cylinder motor from the BMW G310 R. While the peak power and torque outputs for the BMW stand at 34hp and 28Nm, respectively, there’s a strong possibility that the engine will be tuned differently for the RR 310S and might make slightly lower figures.

The TVS Apache RR 310S was originally slated for an early 2017 launch but that hasn’t happened as of yet and it has come to light that the bike may hit showrooms by the middle of this calendar year.