The Bonneville now gets hot-rod styling as well as other mechanical changes to create a brutal beauty. 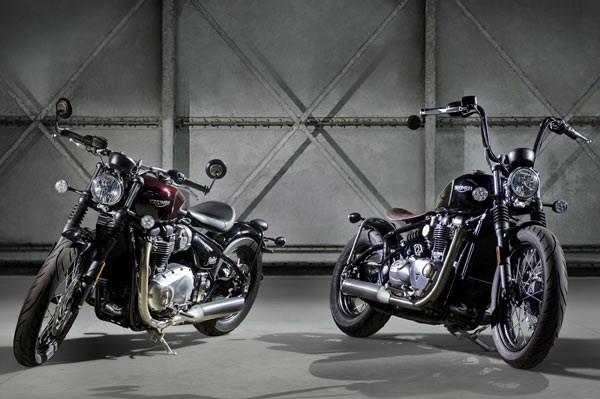 To a large extent, Bobbers have been the staple of the American motorcycle customisation scene. But back in the day, there has been a niche of custom bike makers who have been using British parallel twin motorcycles such as Triumphs to build “bob jobs”. As a nod to the popularity of the old Bonneville in these circles, Triumph has just launched their own Bobber based on their latest generation T120 Bonnie.

In order to stick true to the low-Bobber stance, this new bike maintains clean lines, a single seat, wide flat handlebars, minimal bodywork and headlight, sculpted tank, wire-spoked wheels as well as a chunky rear wheel. The rear wheel also gets a hub designed to mimic a classic drum brake and there’s an authentic battery box with a stainless-steel strap, rear mudguard loop and bar-end mirrors to complete the look.

As this new bike is based on the Bonneville T120, it shares most of its frame and front suspension. However, to mimic the true Bobber hard-tail appearance, Triumph has engineered an entirely new cage-type swingarm with paddock stand bobbin mounts and a monoshock rear suspension that’s neatly hidden away. The floating single-seat setup is not just unique in the way it looks, but in the way it functions as well. The slotted seat design not only allows riders to slide it forward or backwards as required, but the entire rail on which it is mounted can be tilted up or down, making for a highly customisable riding position. At the lowest setting, the seat height is just 690mm, which should make the Bonneville Bobber a hit even amongst those who are a bit vertically challenged. Even the single instrument pod is tilt adjustable and its angle can be changed by using a simple quick-release mechanism.

There are some other rather interesting design bits as well, that really create that custom bike look. These include a sprocket cover with a removable inspection cap, bronzed-out engine badges and silver satin and graphite handlebar risers.

Since the HT (high torque) spec 1,200cc parallel-twin motor has been borrowed from the T120, this Bonneville Bobber makes 80hp of peak power and 105Nm of peak torque. The slick shifting six-speed gearbox has been maintained as has the ride-by-wire throttle. The electronics package which features Road and Rain riding modes, switchable traction control as well as ABS has also been kept as it is. But to ensure that the Bobber gets its own unique sound, Triumph developed a new twin-airbox system with two separate filters and a unique intake system. The exhaust system has been redesigned as well, and the bike gets brushed stainless-steel, twin-skin exhausts with 'slash-cut' sawn off peashooter silencers which are shorter and lighter than the Bonneville T120. There’s also a new output shaft to better integrate the chain drive system with the re-engineered back end.

The Bonneville Bobber rides on tube-type Avon Cobra tyres that were specifically designed for this bike. The front Avon Cobra AV71 is sized at 19”x2.5” while the rear gets a chunky 16”x3.5” Avon Cobra AV72 radial. Of course, Triumph is also set to offer customisation options with the Bobber including Vance and Hines exhausts, adjustable rear suspension co-developed with Fox, custom seats as well as ape-hanger handlebars.

While Triumph hasn’t officially announced whether this bike will be coming to India, we suspect it should hit Indian shores sometime early next year. Expect to pay a price premium over the standard T120 though.