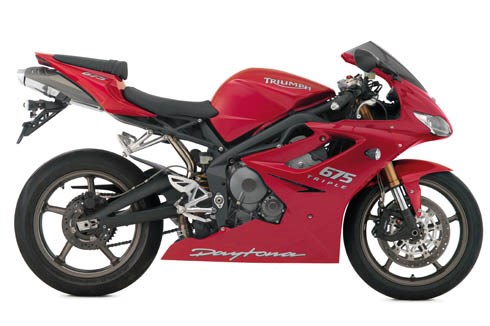 The first Triumph motorcycles will shortly reach us as CBU.

Triumph has appointed Ashish Joshi as its Managing Director for India. Prior to joining Triumph, Ashish was heading the European operations for Royal Enfield and established the company’s business in Europe. He has over 16 years of experience in Asia and Europe.

Triumph Motorcycles has in recent years been the fastest growing motorcycle brand in the world. The innovation and engineering passion that gave birth to the iconic Bonneville of the 1960s has today created a broad range of bikes suited to all motorcycle riders, including the 2.3 litre Rocket III, the Speed Triple, the award-winning Daytona 675 supersport machine and the recently launched Tiger 800.Remaining true to their heritage, Triumph combines the very latest design and manufacturing facilities with the character and design flair that has always been associated with the famous swooping badge.

Commenting on Triumph’s entry to the Indian market Nick Bloor, CEO of Triumph Motorcycles, UK said “India is a very important motorcycle market and Triumph has assessed it carefully before deciding to step in. We see it as the next step in our global business model. The appointment of Ashish Joshi is a signal of our seriousness about success in India. I wish him the best and look forward to comprehensive growth from the Indian market.”

First established in 1902 and now based in Hinckley, Leicestershire, Triumph Motorcycles is the largest British-owned automotive manufacturer, producing around 50,000 bikes per year.

Triumph will join other iconic bike brands like Harley Davidson and Ducati on its entry into India. While Harley Davidson has started local assembly of its bikes in India, Ducati imports fully built bikes to sell in India. Other two-wheeler manufacturers like Suzuki and Yamaha have also launched some popular high end bike models in India like the Hayabusa and the R1.