TVS Racing kick-starts its 2018 INMRC campaign at Kari Coimbatore this weekend where the Apache RR 310 track bike will also make its debut. 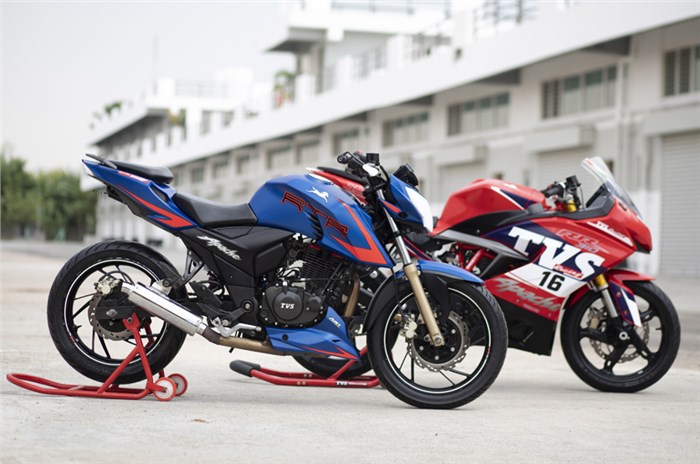 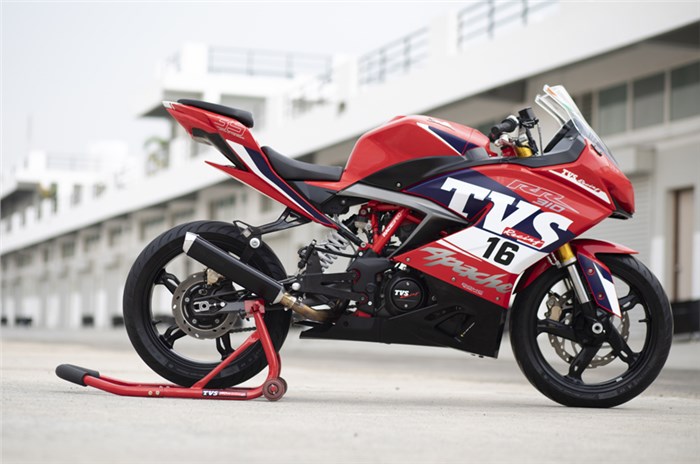 The inaugural edition of the TVS One Make Championship RR 310 will commence this weekend and see 12 riders competing in it. Making its racing debut will be the race-spec TVS Apache RR 310, of which the Hosur-based manufacturer has shared some details.

Powering the race bike will be the same 313cc, single-cylinder motor as seen on the stock road bike. However, TVS engineers have modified the engine and it now develops 38hp at 10,300rpm (stock engine delivers 34hp at 9,700rpm). According to TVS, the Apache RR 310 race-spec bike has a top speed of 175kph, whereas the standard motorcycle has a claimed figure of 160kph.

From the image shared with us, it’s evident that TVS engineers have also added a performance exhaust and repositioned the foot pegs backwards for a sportier riding posture. The body panels are similar to the standard motorcycle, but the headlight has been removed. The bike also gets new graphics. The TVS One Make Championship RR 310 will consist of five rounds and will be part of the Indian National Motorcycle Racing Championship (INMRC). The first race of the season will be held at Kari Motor Speedway, Coimbatore, on June 8.

Commenting on the upcoming season, B Selvaraj, team manager, TVS Racing said, “The last season was extremely good for us, with our champion rider Jagan Kumar scoring a double hat-trick of championship titles. Also, we won the team and manufacturer championship in Super Sport Indian up to 165cc category.  We hope to continue our good form and the first race will be crucial to set the momentum for the rest of the season. The TVS One Make Series is also exciting this year with the inclusion of the TVS One Make Championship RR 310, and the introduction of the race-spec Apache RR 310 and the new Apache RTR 200 Race Edition 2.0.”

TVS Racing will also race the new race-tuned Apache RTR 200 Race Edition 2.0 motorcycle in the TVS One Make Novice category, the TVS Ladies One Make Series and the TVS Young Media Racer Series. The Apache RTR 200 race bike has been equipped with a slipper clutch, a modified camshaft, retuned front and rear shocks, race-tuned intake and exhaust system and retuned carburettor. TVS claims that the race bike’s motor delivers 24hp at 9,300rpm (20.5hp at 8,500rpm for the stock engine) and the bike has a top speed of 145kph. The TVS Racing riders in the Group B & C categories will be racing on the TVS Apache GP 165 R motorcycle.