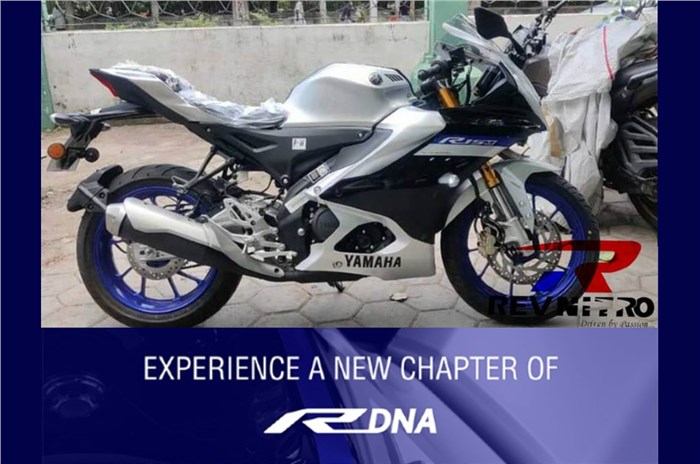 We could also see a surprise launch of the Aerox 155 scooter along with the next-gen R15.

Yamaha has just sent out an invitation for the launch of the next-generation R15 on September 21.

The invitation clearly shows the tank of the new R15 and its latest colour scheme. This silver paint scheme with blue highlights is identical to the new ‘M’ variant that was seen in a leaked image last month. While we can be sure of the new R15 to make its debut next week, we also believe Yamaha could surprise us with the launch of the Aerox 155 as well.

We saw the company do something similar during the launch of the FZ-X where it also went on to launch the Fascino Hybrid unannounced. Not only that, Yamaha also obtained type-approval for its Aerox 155 scooter in India at around the same time as it did for the R15.

The Indian-spec R15 will finally get a USD fork. The upcoming bike is also expected to use the same 155cc, liquid-cooled, 4-valve, single cylinder engine. However, the type-approvalgovernment document revealed that it makes 18.3hp- 0.3hp lesser than the current model. The reason for the drop in power is unknown, but it remains to be seen if there’s a change in the torque figure. The wheelbase at 1,325mm remains the same.

Big changes come in the form of updated bodywork. When viewed from the front, one notices a new fairing and windscreen, with an LED headlight in the centre. A set of Daytime Running Lamps flank the headlight unit on either side. The front end, in fact, seems reminiscent of the new YZF-R7 that was unveiled in international markets. Besides the updated styling and mechanical changes, the next-gen R15 could possibly get Bluetooth connectivity.

Internationally, the Aerox also has a large 25-litre underseat storage space. Other features include digital instrumentation, keyless operation, LED lighting, a charging socket and Bluetooth connectivity. Rounding out the package are large 14-inch wheels at both ends and a 140-section rear tyre.