The spy pictures are of the 125cc Nozza Grande scooter originally sold in Vietnam. 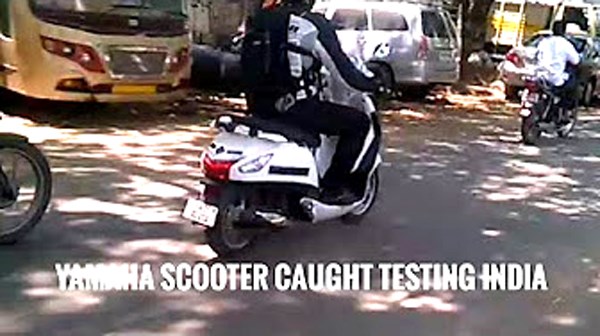 Recent spy pictures taken in Chennai have revealed a new scooter from Yamaha. This scooter, while somewhat resembling the stylish curves of the Fascino, is clearly a new product we haven’t seen in India before. In fact, a closer inspection reveals that it’s Yamaha’s Nozza Grande which was originally launched in Vietnam back in 2014.

The Nozza Grande is targeted at women riders in its home country of Vietnam, much like how Yamaha had positioned the Ray in India. It packs a 125cc, fuel-injected, air-cooled motor that puts out 8.2hp of peak power at 6,500rpm and a peak torque of 9.7Nm at 5,000rpm. With a wet weight of just 99kg, the performance ought to be rather sprightly as well.

The scooter is packed with some interesting features as well. It gets an apron-mounted fuel filler (as was seen on the now-defunct Mahindra SYM Rodeo), with buttons to release the fuel cap and seat lock next to the key slot. Thanks to the tank being in the front, it gets a voluminous 27-litre under-seat storage capacity. At 790mm though, the seat position is a bit high, when compared to Indian scooters. As in Vietnam, the bike spotted features 12-inch cast alloy wheels at both ends, as well as a front disc brake.

Buy why, you ask, is Yamaha, a company known for performance motorcycles, focusing on scooters in India? Well, this might come as a bit of a shock, but Yamaha India’s highest selling two-wheeler is a scooter – the Fascino, to be precise. With about 18,000-20,000 units sold every month, it might not be the sales juggernaut that is the Honda Activa, which sells about 15-16 times that number. But the Fascino outsells Yamaha's most popular motorcycle, the FZ, every month and scooters now account for well over 50 percent of its sales.

So, clearly, this is a very important segment for the company’s growth. With all of Yamaha India's current scooters built around the 113cc platform of the Ray, the Nozza Grande will help the manufacturer break into the 125cc segment in India, where a scooter like the Suzuki Access does reasonably well.

It is unknown at this point whether Yamaha will drop the Nozza Grande’s fuel-injection setup for India to keep costs down. Bringing in a fuel-injected scooter will certainly make Yamaha the one to push the boundaries in the scooter space in the country. But the Nozza is certainly feature-packed enough to stand out in the Indian market, regardless of its fuelling system.

The Nozza Grande is priced at VND 41,990,000 in Vietnam, which translates to nearly  Rs 1.20 lakh. However, based on the how Yamaha prices its scooters in India, we expect an ex-showroom price of about Rs 65,000. We also certainly hope it gets a better name than the current one.