New TVS Ntorq variant teased: what could it get?

The upcoming variant of the Ntorq could be called the XT; the scooter line-up is currently priced from Rs 77,100 to 89,211 (ex-showroom, Delhi). 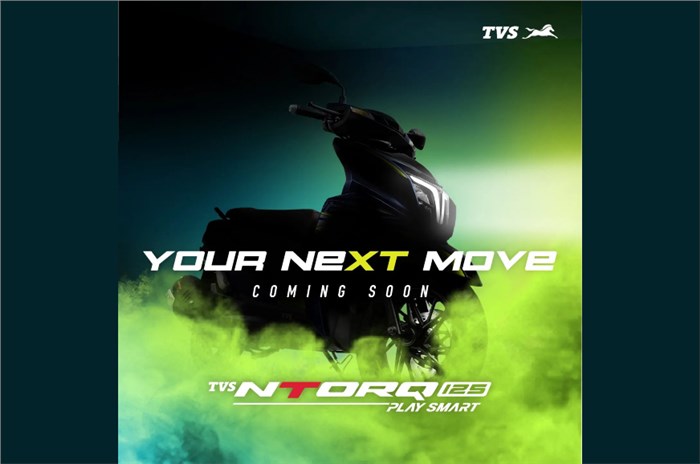 The teaser image of the upcoming TVS Ntorq 125 variant.

TVS has teased a new variant for its popular 125cc sporty scooter, the Ntorq 125. The manufacturer has done a great job of not giving away too much information, simply putting out a picture with the silhouette of an Ntorq, and the words "your next move".

However, the alphabets XT in next have been highlighted. The Ntorq’s most powerful variant is called the Race XP, so perhaps TVS could continue with this naming trend and call the upcoming variant the XT. As for what exactly the variant will be, there are no real clues. This is made even more confusing when you consider that the Ntorq is already a very well-equipped scooter, and there's little left for TVS to add to it.

In its top trim, the Ntorq gets everything, from riding modes to Bluetooth connectivity with turn-by-turn navigation, fully digital instrumentation with features like a lap timer to an LED headlight. One new feature that TVS motorcycles have been receiving recently is increased suspension adjustability, but it's quite unlikely that TVS would offer something like adjustable front suspension on a scooter. But hey, the brand has surprised us before, so never say never.

It's also unlikely that TVS can extract too much more from the 124.8cc engine – the Race XP variant, at 10.2hp, is already the most powerful 125cc scooter in the country. But there is quite a stark difference in performance levels between this Race XP version and the lower variants in the line-up, so perhaps this new variant could strike a balance and form some middle ground.

Another possibility is that this upcoming variant will differentiate itself cosmetically. The brand has, in the past, launched special editions of the Ntorq, with special paint and graphics schemes, specifically the Super Squad editions that are styled after iconic Marvel characters.

Whatever new trick the company has up its sleeve should be revealed shortly, because the teaser image says "coming soon". At present, the Ntorq range is currently priced from Rs 77,100 for the base drum brake equipped model to 89,211 for the range-topping Race XP version (both prices ex-showroom, Delhi). Stay tuned for more updates.

why don't they put Apache 160 engine into this

why don't they put Apache 160 engine into this