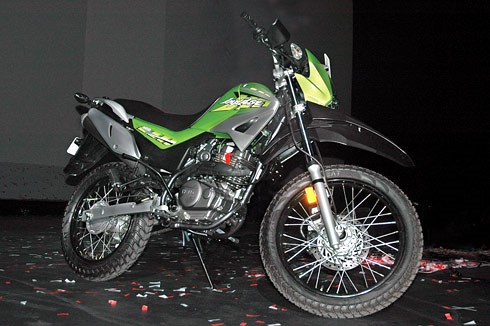 Hero MotoCorp could not have made their debut on a more sensible motorcycle than the Impulse, for a sturdy on-off road motorcycle is just the right motorcycle to tackle pothole riddled Indian roads with.

The tough looking Impulse isn’t going to be popular with short riders, for this is a tall bike, with long travel telescopic front suspension. A high set, arrow shaped, floating front mudguard is standard equipment.

Instrumentation is a trendy blend of digital and analogue, the tachometer reading upto 11,000rpm, while most other details are read of a broad LCD panel. The Impulse becomes one of the first Indian made motorcycles to offer knuckle guards. A small lockable utility box that could house a few knick knacks is well executed on the left.

The riding seat looks slim, climbing onto the fuel tank with a barely perceptible step. On the other side, you can’t miss a long silencer unit. The Impulse shows off an LED brake warning light. A unique tread pattern aids the on-off road identity of the bike. Paint luster, fit-finish, plastic and rubber, and quality are all to a Hero typical lofty standard.

The Impulse’s 149.2cc, alloy-cased, single-cylinder and air-cooled engine comes with a bright red spark-plug cap you can’t miss. Power output is close to standard for an Indian 150, 13.2bhp built up at 7500rpm, as is torque, 1.36kgm released at a healthy 5000rpm. You get a five-speed gearbox to harness the motorcycle’s power. The engine is kick or electric started, with an exposed chain drive visible.

The Impulse enjoys a robust, tubular steel frame. The rectangle section, dual sided swingarm also mounts a single, gas charged rear shock absorber. The new Hero MotoCorp motorcycle has a 1360mm wheelbase, and 240mm front disc brake. The rear brake pedal is metal, in keeping with the character of an on-off road motorcycle, and extends down into its position, while the 110mm rear drum brake operating lever sits upside down, allowing it to sit higher than on a conventional motorcycle.

The front rim is 19 inches, two inches larger than the rear, which is sure to help the Impulse turn into corners easily. The Impulse is a plucky move, bringing Hero MotoCorp into the market with the statement that they won’t shy away from the challenges that lie ahead.

Flashback to 1999 and you can’t forget their CBZ pioneering 150cc motorcycles in India, a segment which has today assumed mammoth proportions and significance. The Impulse does have the potential to perform a repeat performance for this market leading company.

Pricing remains a question mark, but do pick up your copy of Autocar India’s anniversary issue to read about the Impulse in greater detail.