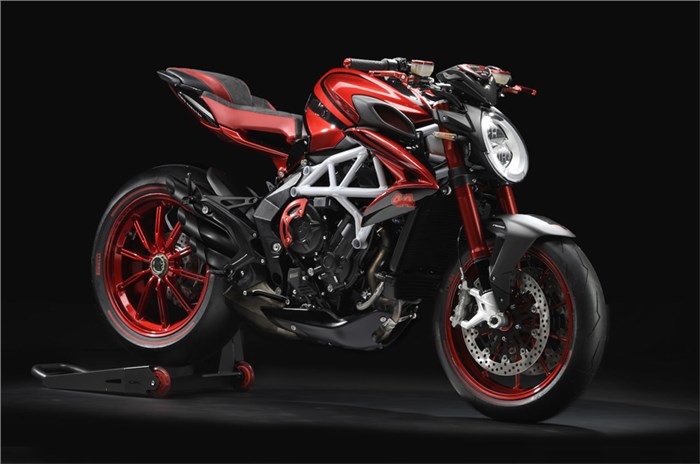 Italian brand MV Agusta has revealed the next bike in its line-up of LH44 limited-edition motorcycles, designed in collaboration with Formula One driver Lewis Hamilton. This time, it is the Brutale 800 RR that has gotten the special treatment. The previous model to feature the Formula One driver’s name was the F4 LH44, but with the F4 now going out of production, the bike maker's efforts were turned to the Brutale. 144 units will be produced, with each one being numbered and given a certificate of authenticity.

Differences from the standard bike come mostly in the form of graphics, the colour scheme, and some special carbon-fibre and CNC-machined parts. Crimson red is the predominant colour, with the body panels, wheels and fork tubes being finished in this shade. The engine and exhaust have been blacked out, and the tubes of the trellis frame are finished in white. The seats also get the dual-tone red/black treatment.

The levers, fluid reservoir caps (front brake and hydraulic clutch), fuel filler cap and engine oil cap are all CNC-machined and finished in red as well. The front mudguard gets the carbon fibre treatment too. The bikes can be identified by a unique number on the small carbon-fibre screen above the headlight.

Mechanically, the LH44 is identical to the standard Brutale 800 RR, which means it shares the 798cc, inline-triple engine churning out 140hp at 12,300rpm and 87Nm at 10,100rpm. The six-speed gearbox features a bi-directional quickshifter.

Prospective buyers of the LH44 better have deep pockets, because prices start at €24,144 (approximately Rs 19.28 lakh), which means the bike is a massive €8,000 (Rs 6.40 lakh) dearer than the standard bike. However, this is not unusual –the F4 LH44 costs more than three times what the standard F4 costs. In comparison, the Brutale LH44 is a steal!