The 390 Adventure will be launched in India at IBW in December. 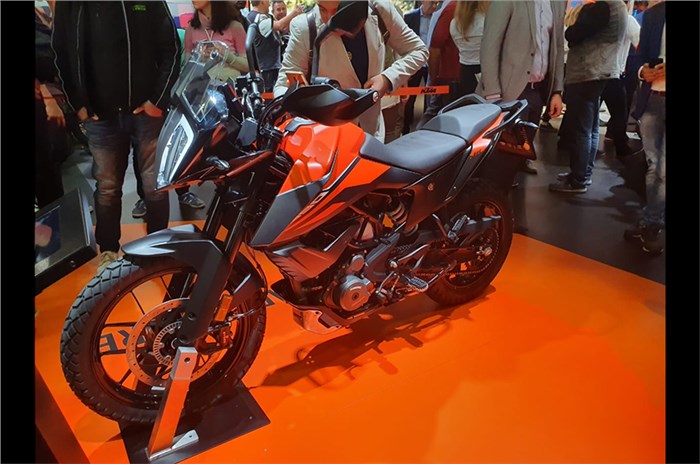 The wait is finally over! KTM has just revealed the much awaited 390 Adventure at EICMA 2019, in Milan. Test mules of the bike were spotted numerous times in near-production ready form, and a lot of info about the bike had been revealed from them. Now that KTM has officially revealed the bike, here's what's on offer.

The 390 Adventure is essentially an off-road oriented version of the 390 Duke and uses the same 373.2cc single-cylinder engine. Power and torque figures are identical as well with 44hp produced at 9,000rpm and 37Nm coming in at 7,000rpm. KTM has not made any changes to the sprocketing, so the final drive ratio remains identical to that of the 390 Duke. What is interesting, however, is that the 390 Adv will offer switchable traction control.

As we’d reported earlier, the 390 Adventure gets a 100/90-19 tyre at the front and a 130/80-17 tyre at the rear. Suspension duties are carried out by a 43mm USD fork with compression and rebound adjustability and a rear monoshock that can be adjusted for pre-load and rebound. This setup also offers more travel when compared to the 390 Duke - 170mm/177mm (front/rear) compared to the 142mm/150mm avaialble on the naked 390.

The 390 Adventure also differes from its naked sibling in terms of steering head angle and trail. On the 390 Duke, it is 65 degree and 95mm, respectively, while on the 390 Adventure it is 63.5 degree and 98mm. The changes have resulted in a considerably longer wheelbase of 1,430mm (compared to 1,357mm on the Duke). Ground clearance is a rather decent 200mm, while the seat height is on the higher side at 855mm. The 390 Adventure also comes with a slightly larger fuel tank, with a capacity of 14.5 litres. The additional hardware brings with it an increase in weight - the 390 Adventure weighs in at 158kg (dry).

We expect the 390 Adventure to cost somewhere around the Rs 3 lakh mark when it arrives in India - it's scheduled to launch at IBW in December. When it does, it will still cost significantly less than its nearest rival – the BMW G 310 GS (Rs 3.49 lakh*). This KTM is also likely to be the company’s first BS6/Euro 5 model.