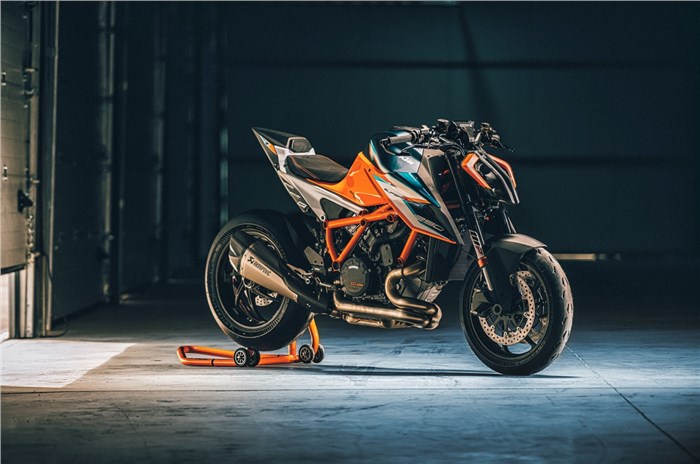 KTM has just pulled the covers off the top-of-the-line 1290 Super Duke RR – a lighter, better-equipped iteration of the already capable 1290 Super Duke R. The bike is limited to 500 units worldwide and will be made available only in select markets.

The RR prefix usually denotes high performance and it’s no different with this KTM. Powering the bike is the same 1,301cc V-twin engine from the standard bike, and it produces 180hp and 140Nm of torque. If those aren’t impressive numbers by themselves, the bike weighs just 180kg, resulting in a mind-boggling 1:1 power-to-weight ratio. And there’s where this bike differs from the unit that it’s based on – the weight. How else did KTM manage to shed a few pounds off the standard model?

For starters, the Super Duke RR uses an all-new carbon-fibre subframe that weighs a mere 850g. There are a lot of other carbon elements, including the front mudguard and the brake caliper cooling scoop. Suspension is handled by a WP Apex Pro 7548 USD fork at the front and an Apex Pro 7746 monoshock, which is a bespoke unit for the 1290 Super Duke RR. KTM has also managed to save weight on the triple clamp by 320g by using lighter construction materials.

The standard wheels have been replaced with forged aluminium units that weigh a total of 1.5kg less. The wheels are shod in sticky Michelin Power Cup 2 radials.

Bookings for the 1290 Super Duke RR will open for European customers on April 8, 2021. There’s no word on pricing, but we expect it to cost a fair bit more than the standard model, considering the added equipment and the exclusivity of it being limited to just 500 units.