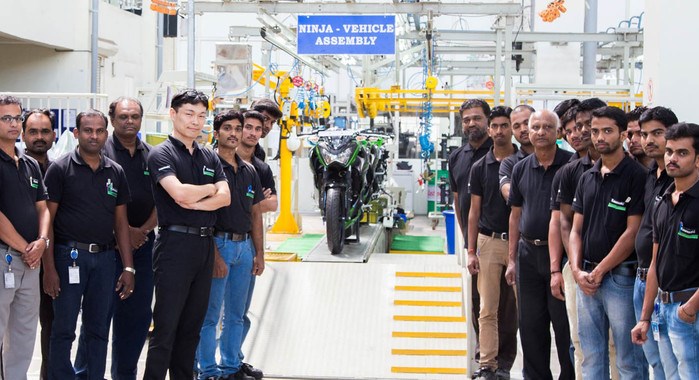 IKM, a 100 percent subsidiary of Kawasaki Heavy Industries, Japan, is building its own motorcycle assembly plant in Chakan, scaling up its local operations, restructuring and expanding its teams and retail network as it prepares to go solo in India.

Bajaj Auto and India Kawasaki Motors ended their eight-year-old alliance with effect from April 1, 2017. The alliance between the two companies covered sales and aftersales services for Kawasaki motorcycles from Bajaj Auto-owned Probiking network (comprising over 300-plus showrooms) since 2009.

The Bajaj Probiking showrooms increasingly got converted into KTM dealerships after KTM’s entry into India via the 200 Duke model in 2012.

India Kawasaki, on the other hand, has been looking to standardise and benchmark activities across several operations ranging from local assembly, parts procurement to retail and aftersales services.
Speaking on the condition of anonymity to our sister publication, Autocar Professional, a reliable source aware of the new developments said: “Kawasaki is very serious about its game plan in India. All was not well between Kawasaki and Bajaj Auto for some time now. The company was apparently upset with the product cannibalisation between Kawasaki and KTM brands and customer overlap at the Bajaj Probiking showrooms. While the Kawasaki bike sales did not grow as per the expectations, sales of KTM motorcycles took off well.”

“Going forward, Kawasaki will have full control over their operations ranging from parts procurement and warehousing, quality checks to aftersales services to its customers. The Japanese management at IKM are diligently working to set up teams for all core responsibilities as they continue to expand their operations. They plan to move to their own plant very soon,” the source added.

India Kawasaki Motors, which was officially established in July 2010, is learnt to be silently undergoing a critical transition during these months.

Kawasaki heads for 'Make in India' at Chakan

Although details of the upcoming facility in Chakan, proposed investments, targeted annual production capacity and other critical areas remain unknown, the move is good news for the component supplier community located in the western region.

Largely, Kawasaki setting up its own standalone unit in Chakan will not only mark a big milestone for the company’s journey in India, it will also translate into a solid boost for the fast-growing premium motorcycle market.

Our sister publication Autocar Professional estimates that IKM may shift into its all-new assembly plant and commence operations before the festive season approaches, if not for unforeseen delays and change of plans.

“We may have some news to share with you but we won’t talk about it now,” Yutaka Yamashita, managing director, IKM, who refused to comment on this development, recently told our sister publication.

The company’s annual production capacity at Bajaj Auto’s Akurdi-based assembly line is close to 10,000 units, understood to be on a double-shift basis. According to the senior company official, Kawasaki sold nearly 1,400 units in CY2016, which translates into almost-flat growth for IKM YoY.

“CY2016 was a challenging year for us as we are trying to improve our business. We are very positive for our future growth, we are expanding our operations, working on parts procurement and localisation step by step. Our highest priority is to take care of our customers. So we are working to increase our network, which we plan to grow by 30-40 percent this year. We have already launched six new models this year and more new motorcycles will come,” Yamashita had told Autocar Professional on the sidelines of the Z1000 / R models in Pune on April 23.

Impact on the midsize motorcycle market

The midsized motorcycle segment has been witnessing new entrants with more affordable models lately, thanks to the local manufacturing and CKD operations by various OEMs. Bajaj Auto can be credited for the growth of this premium category by giving it a substantial push through local manufacturing and retailing of KTM models in India.

The midsize class is expected to further see new players stepping into this booming territory later this year, including TVS Motor Company and BMW Motorrad, which will not only heat up the competition in the market, but will also bring new set of choices for the customers.

Kawasaki has had an early presence in India and has witnessed the building-up of the midsize motorcycle league. The company, which had first introduced its Ninja 250 at the Auto Expo 2008, is now aggressively driving its operations to match the right price points through localisation of its globally renowned models.

Although IKM officials have declined to comment on the development, company’s localisation plans for its 300cc and 650cc engines would directly impact the demand for its rivals that include Yamaha’s R3, Honda’s CBR650F, Triumph’s Street Triple among others.