Indian FTR Carbon reveal on May 1

A short teaser on the company’s channel reveals a carbon-fibre tank. 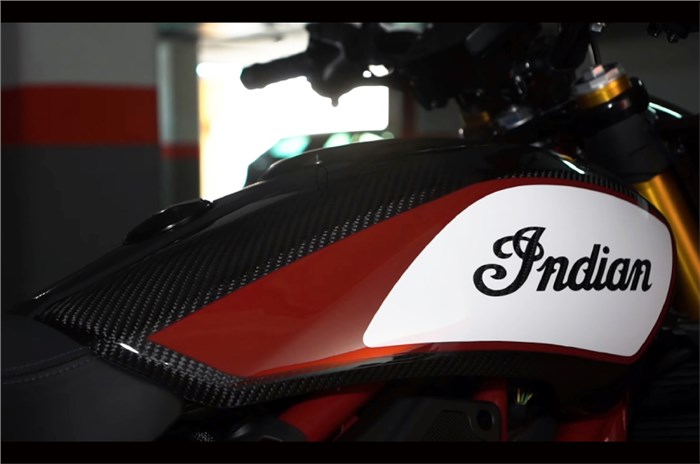 Indian Motorcycles has put out a short video on one of its regions’ YouTube channels, teasing the launch of a new model - a carbon-fibre clad FTR1200. The model is set to be revealed on May 1.

The video is just 12 seconds long and features the text, “As close as you can get to the three-time championship winning FTR 750.” Indian Motorcycles have dominated the flat-tracking scene in America for years with the FTR 750, and the FTR 1200 draws inspiration from that motorcycle. We’re not sure to what extent this new motorcycle will feature carbon-fibre, but the short clip reveals some on the tank. If Indian decides to use the light-weight material liberally on the bodywork and on the wheels, the weight savings could allow the FTR Carbon’s weight to approach its racing counterpart, from which it is derived.

The video does not reveal whether the motorcycle will also feature mechanical updates. It’s likely it will feature the same 1,203cc V-twin engine as the standard model, which produces 120hp at 8,250rpm and 115Nm of torque at 6,000rpm.

The standard Indian FTR 1200 S and FTR 1200 S Race Replica were on sale in India last year, but no information has been revealed on when its Euro5/BS6 iteration will arrive. Last year, the FTR 1200 S was priced at Rs 15.99 lakh, while the Race Replica cost a fair bit more at Rs 17.99 lakh. The Race Replica variant is essentially in a different colour scheme and comes with a red trellis frame (the frame on the S trim is black) and an Akrapovic exhaust. If the FTR 1200 does make its way to India, it will replace the Race Replica as the flagship FTR 1200 and will demand an equally premium price tag. It also remains to be seen if the carbon bits will be offered as add-on accessories to owners of the standard FTR 1200.