An unconventional comparison of two unusual bikes. We find out what we’re missing in India and what we aren’t, and why. 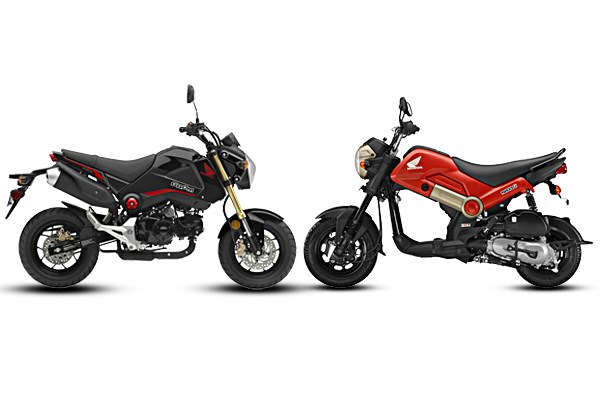 Let me just clarify that this is not a direct comparison. However, ever since Honda showed off the Navi at Auto Expo 2016, a lot of people have been comparing it to the Grom – the company's Monkey bike that’s quite popular across Southeast Asia, Europe and even the United States. While the Grom and Navi share some visual similarities, they’re really as different as chalk and cheese. So a quick rundown on what sets them apart should explain what each bike is about and, contrary to popular belief, getting the Grom to India in place of the Navi isn’t as sensible or easy.

Both the Grom and Navi borrow their drivetrains from other two-wheelers in Thailand and India respectively. The Grom’s 124.9cc single-cylinder, air-cooled, fuel-injected motor along with its 4-speed manual gearbox comes from the Honda Wave, a popular step-through in South East Asia. This motor makes 9.8hp of maximum power and 10.9Nm of maximum torque. And much like a conventional motorcycle, you have a chain driving the rear wheel. In comparison, the Navi gets the motor-gearbox combo from the Honda Activa, the highest-selling scooter in India. This motor is a 109.19cc single-cylinder, air-cooled motor that relies on a carburettor for breathing and develops 7.9hp of peak power and 8.96Nm of peak torque. The Navi drives its rear wheel through a scooter-standard variomatic transmission. So the Grom has fuel injection, proper gears and more power; that would definitely make it more exciting to ride for the enthusiasts, however, this would also drive up costs. More importantly, many new riders will find it easier to ride the Navi because of the CVT transmission, and of course the convenience it offers in city traffic.

Under that cute skin

Just like the engines and transmissions, which are very different in design, so are the chassis. The Grom’s motor might be from the Wave, but its steel mono-backbone frame is a completely different affair from the step-through’s underbone chassis. It gets a motorcycle-like single-tube spine chassis with 31mm inverted forks at the front and a box section swingarm with a monoshock at the back. The Navi’s frame, as dictated by the engine, is a scooter-like underbone type design. The suspension too is scooter-derived, with inverted (albeit much thinner than the Grom’s) forks at the front, while a spring-loaded hydraulic unit connects to the swingarm/drivetrain unit. On the whole, the Grom weighs in at a fairly light 101.7kg and surprisingly, the Navi is almost identical at 101kg.

Matters of the head

While the Grom is like a proper little motorcycle, the Navi has some practical features like a scooter. There’s a floorboard under the slim tank that offers a bit of storage flexibility and if you like, you can also get a luggage box fitted into that area as part of Honda’s Navi customisation kit (though it’s not available immediately). On the Grom, you need to figure luggage options in the same way you would for any other motorcycle – tail bag, saddlebags, tank bag, etc. Both these bikes feature the same 765mm saddle height, so even fairly short riders should have no issues straddling either (though we can’t vouch for very tall riders on either bike). At 156mm, the Navi’s ground clearance is a little bit lower than the Grom’s (160mm). However, one of the largest advantages it has over the Navi, apart from performance of course, is a larger fuel tank (5.5-litres vs the Navi’s paltry 3.8-litres). And with a claimed mileage of 65.77kpl, the Grom should be able to go over 350km on a tank full of petrol.

The meaning of it all

Clearly, the Grom seems like a stronger bike in many regards. So why haven’t we got the Grom in India instead of the Navi? Firstly, HMSI has managed to pull off a pricing masterstroke with the Navi. By sharing the drivetrain, chassis and component bits with the Activa – India’s largest-selling two-wheeler for the last few months – Honda has been able achieve great economies of scale. You can see it in its price tag of Rs 39,500 (ex-showroom, Delhi). If the Grom was to make its way here, Honda would need to manufacture every bit of it from scratch for it to start making sense. Even then it wouldn’t be affordable from any angle. When you look at the pricing of the Grom in the country where it’s manufactured, Thailand, when converted to Indian currency it costs about Rs 1.25 lakh! If the Grom had to come over as a CKD, it would be pricier still. Secondly, even with its unusual design and funky character, the Navi hasn’t sacrificed the practicality of an urban runabout. Sure, it’s not as convenient as a traditional scooter, but it certainly is a lot more city-sensible than a traditional motorcycle, and that includes the Grom as well.

If you think about it, even with the massive technical differences between the two bikes, HMSI has really captured the spirit of the Grom with the Navi. It has almost all the cool factors and the ‘don’t-give-a-damn attitude’ at a fraction of the price. We think it’s very commendable on the bike maker's part, to break the mould and make a bike that’s so out of the box for the Indian market. It is quite polarising, and that, in a country where conventional has been king so far, is actually a good thing. So while some of us might be a little unhappy that we got the Navi rather than the Grom, we should rest assured with the fact that we definitely got a much better deal.