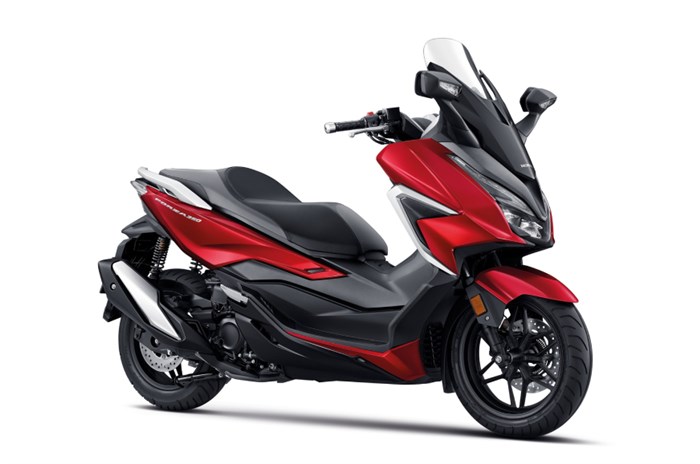 The Forza 350 maxi-scooter revealed in Thailand is powered by a 329.6cc, single-cylinder engine and is available in two variants, Standard and Touring.

At first glance, the new Honda Forza 350 looks similar to the outgoing model, save for the new colours. It still looks quite striking, especially when viewed from the front. The side profile reveals its length, long wheelbase and the stepped seat, all characteristics of a proper maxi-scooter.

Some of the features on the Forza 350 include an electrically adjustable windscreen (can be raised by 150mm), LED lights, keyless ignition, digi-analogue instrument cluster, and a USB charger in the enclosed cubby hole behind the front apron. It has space to store a phone, as well as a water bottle. Speaking of storage, there is a large bin underneath the long seat that’s enough to accommodate two helmets.

Underneath the vast bodywork lies the new 329.6cc, single-cylinder, four-valve, liquid-cooled engine. It replaces the Forza 300's engine that displaced 279cc and produced 25.1hp at 7,000rpm and 27.2Nm of torque at 5,750rpm. Honda has not revealed the power and torque figures of the new scooter yet but says that it is more than what the outgoing model's engine produced. It is also likely a Euro 5/ BS6 compliant engine and we expect Honda to confirm this when it reveals the engine specifications. Like the Forza 300, the Forza 350 is equipped with a CVT transmission and also gets the Honda Selectable Torque Control (HSTC) system, or traction control in Honda speak.

The Forza 350's underpinnings are similar to the Forza 300's. It uses a tubular steel frame, with a telescopic fork at the front and twin, adjustable shock absorbers at the rear. The front wheel size is 15 inches while the rear one is 14 inches. It has disc brakes at both wheels along with with dual-channel ABS.

While the maxi-scooter is on sale in Thailand, chances of it coming to India are uncertain.