Honda has bumped the displacement of the old engine, from the CRF250L and CRF250 Rally, by employing a longer stroke. 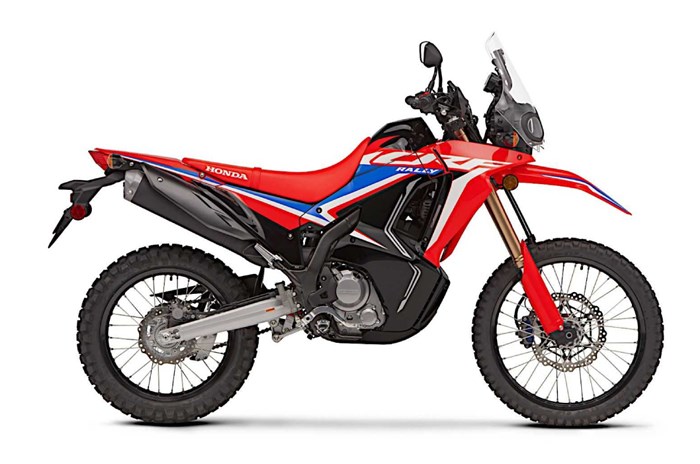 The Honda CRF300L and CRF300 Rally have just been revealed, replacing the famous CRF250L and CRF250 Rally in the Japanese manufacturer’s dirt bike line-up.

The CRF300L and CRF300 Rally are powered by the same engine. Both get a 286cc, liquid-cooled, single-cylinder engine, up from 250cc on the older model, thanks to an 8mm increase in stroke - now 63mm. The bore remains the same at 76mm. This bump in displacement has also brought about an increase in peak output figures - power is up from 24.4hp to 27hp at 8500rpm, while torque has risen to 26.6Nm from 22.6Nm at 6,500 rpm. The bikes also feature changes in the gearbox -  shorter ratios for gears one through five, and a taller sixth gear. The 300L and 300 Rally also get an assist-and-slip clutch, which Honda says offers 20 percent less load at the lever.

While it looks largely the same as the ones on the CRF250s, the chassis has been revamped as well. The main downtube is 30mm narrower, while the lower downtubes are 3.2mm thinner than before. The frame’s central brace is also 20mm slimmer than its predecessor. Consequently, the frame is now 2.15kg lighter than what it used to be and the swingarm is 550g lighter. Overall,  both models are 4kg lighter than their predecessors, with the CRF300L weighing 142kg and the Rally at 153kg.

A large part of the difference in weight comes from the larger fuel tank on the Rally. The 300L features a smaller 7.8 litre fuel tank, while the Rally gets a 12.8 litre unit. The Rally variant also gets weighted handlebars, rubber inserts on its foot pegs, and flexibly-mounted LED indicators.

Suspension components are different as well with a Showa fork at the front that now offers 10mm more travel. Ground clearance has risen by 5mmm on the Rally, to 275mm, and a notable 30mm on the CRF300L to 285mm.

A new LCD instrument cluster is also part of what the new models have to offer.

Honda has not revealed prices for both models, at the moment, but they are expected to reach dealerships in Europe by January 2021. Honda’s dirt bike line-up was never available in India, and it’s unlikely that the CRF300L and CRF300 Rally will make their way here in the near future.