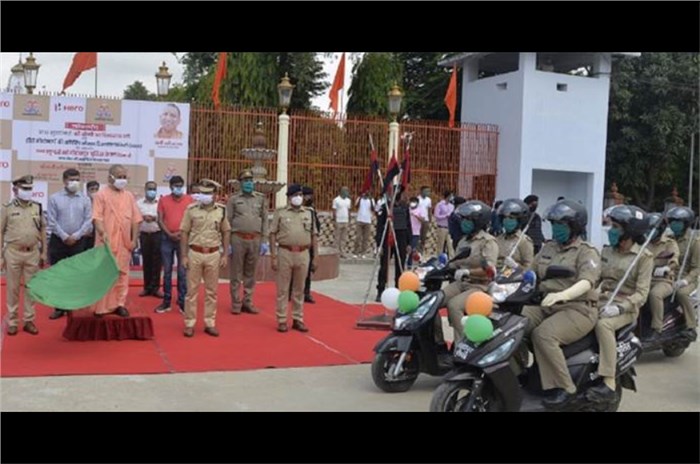 The scooters have been handed over to the women police officers of the Gorakhpur police department.

Hero has presented 100 units of its Destini 125 and Maestro Edge 125 to the women police officers of the Gorakhpur police department in Uttar Pradesh.

The scooters are equipped with a GPS system, sirens, flashlights, public announcement (PA) systems, pepper spray and a few other law-enforcement accessories. The company says these have been added to help the women cops who are a part of the special ‘Sherni Dasta’ squad.

Hero says its Corporate Social Responsibility (CSR) initiative, Project Sakhi, is launched in association with the police departments to provide women officers with two-wheelers to increase their independent mobility.

Till date, Hero MotoCorp, through its association with state police departments of 11 Indian states including Uttar Pradesh, Chhattisgarh, Rajasthan, Maharashtra, Telangana, Haryana, Uttarakhand, West Bengal, Karnataka, Orissa and Madhya Pradesh, and one Union Territory (Puducherry), has handed over more than 2,900 two-wheelers to police departments and has empowered many women police officers under the Project Sakhi initiative.