The company says the 4,011-km distance was covered without stopping to recharge the bike. Batteries were swapped whenever necessary. 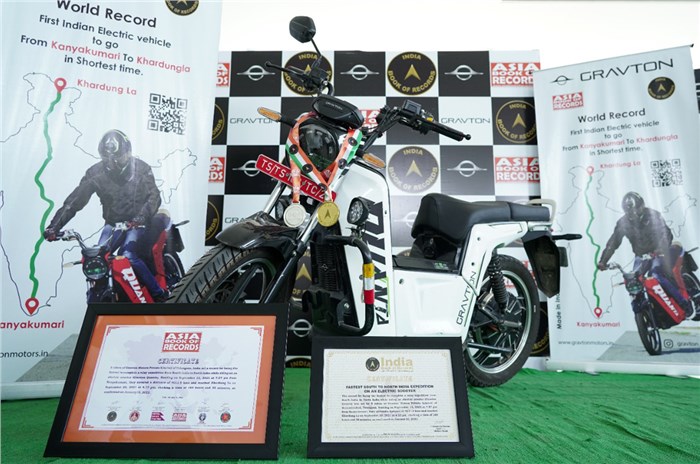 Gravton Motors, a Hyderabad-based EV start-up, has said that its Quanta electric bike has entered the Asia Book of Records by completing the Kanyakumari to Khardung La ride in the shortest time – 164 hours and 30 minutes, or 6.5 days. The K2K feat was achieved back in September 2021, when the team covered a distance of 4,011.9km, during which the bike did not stop to recharge. Batteries were swapped whenever necessary, however, it’s not clear how many times it had to be swapped.

The only stop the team took was at Manali, after riding continuously for 3,400km, to allow themselves to get acclimatised to the weather.

Gravton claims the Quanta suffered no reduction in performance courtesy of their thermal management system which was designed to optimise performance even in the low temperatures of Ladakh.

The Gravton Quanta gets a proprietary BLDC motor that delivers 3kW of power and 172Nm (at wheel) of torque. Gravton claims the Quanta can reach a top speed of 70kph. As standard, it can go up to 150km in Economy Mode, 110km in City and 85km in Sport, although the prevalent road conditions may have an effect on these figures.

The Quanta’s range can be extended up to 320km with their dual battery system. The 3kWh battery can be fully charged in three hours and will reach 0-80 percent in two hours. The Quanta will be fully charged in 90 minutes with a fast charger. Gravton also claims customers can order a fully charged battery to their location if they run out as a part of their Swap Eco System.

The Quanta has a saddle height of 785mm and a ground clearance of 195mm. It comes with 17-inch wheels both front and rear. Gravton says the Quanta has been built for Indian road conditions and claims it has the world's first rib-caged chassis to enhance its durability, which, incidentally can also take a payload of up to 250kg.

The Quanta can be booked on Gravton’s website for Rs 99,000 by pre-registering and paying Rs 499. This is available across India.

Would you like to ride this EV in Ladakh? Let us know in the comments below.

Two-wheeler sales slump in January 2022, but Ather bucks the trend