The Pulsar N250 and F250's launch last year introduced the new generation of Pulsars. The Pulsar 125 is the next in line. 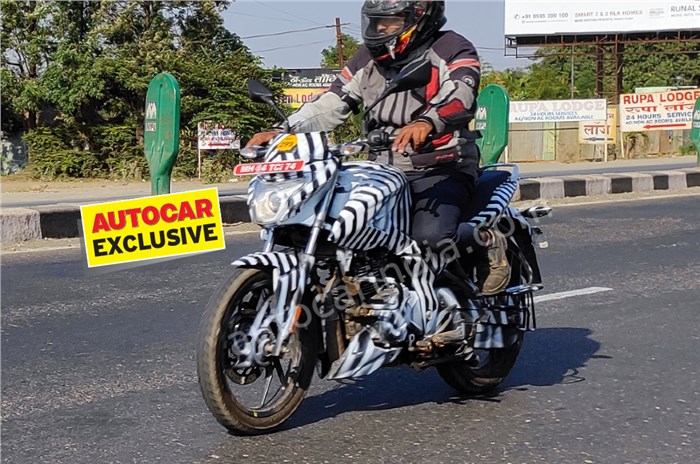 There are some key factors which confirm that this is a smaller displacement model. For one, this appears to be an air-cooled engine – the oil cooler is not visible – unlike the oil-cooled units on the 250s. The tyres are also noticeably skinnier than those on the 250s, the front brake disc is considerably smaller and this test mule features a single-piece seat, in contrast to the split seats on the 250s.

The physical size of the engine and the dimensions of the underpinnings suggest that this bike will displace between 125cc and 150cc. A closer look reveals that the test mule sports a heel-shifter, and the only model in the current Pulsar line-up to get one is the Pulsar 125. Further reinforcing this is the presence of a chain cover, which again, is only seen on the current-gen Pulsar 125.

It most definitely still looks like a Pulsar though, and is styled along the lines of the quarter-litre Pulsars: the side panels and tank extensions look quite similar to the N250, while the headlight somewhat resembles the F250’s unit. While not seen in this image, the bike also featured the signature Pulsar split tail-lamps that looked nearly identical to the 250s. And even though this is likely to be the smallest model in the Pulsar line-up, it still gets sporty touches like a belly pan and a small windscreen.

What’s noteworthy is that this test mule seems quite well-finished. The bodywork seems complete and all the panels seem to sit flush with each other. There is no significant data-logging equipment seen on the motorcycle, and even details like the lights, number plates, switchgear and controls appear to be quite well finished. All this points towards the fact that the bike is in its final stages of testing, and an official launch shouldn’t be more than a few months away.

The question of what name this new bike could launch under is a rather interesting one. The Pulsar range has historically been named according to displacement, but the brand recently trademarked a couple of interesting new nametags for the Pulsar line-up. You can read about them here.