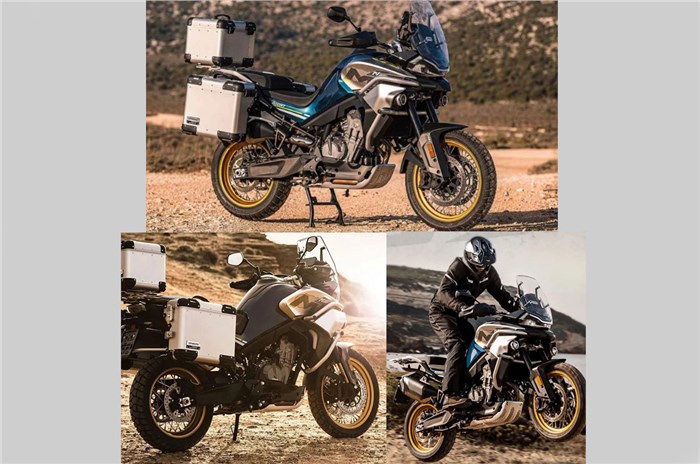 CFMoto MT800 is powered by a 799cc, liquid-cooled parallel-twin engine.

CFMoto has taken the wraps off the 800MT adventure motorcycle that's based on the KTM 790 Adventure. To reiterate, CFMoto is the official partner for KTM in China and produces its 790 range of motorcycles and the parallel-twin engines. In addition, it also produces KTM's single-cylinder engines for the local market.

The CFMoto 800MT shares the same LC8c engine that you see in the KTM 790 Adventure. However, it has been detuned in the CFMoto 800MT and is powered by a 799cc parallel- twin engine and produces 94hp and 77.28Nm. Nevertheless, these figures are in the same ballpark of motorcycles such as the Triumph Tiger 900 GT.

CFMoto also seems to have taken inspiration from its Austrian partner and has equipped the motorcycle with a wide range of features. This includes ride by wire, riding modes, lean sensitive traction control and ABS. All of this can be accessed using a 7-inch TFT display.

Keeping the 800MT's Adventure touring orientation in mind, CFMoto has also thrown on cruise control and an automatic high beam function for the headlamp.

The 800MT seems to use a KTM-style tubular steel frame, however, the swingarm is all-new. The suspension components are different, with the Chinese machine getting KYBs instead of WP suspension on the 790 Adventure. It is a similar story with the brakes as well, as the CFMoto gets J.Juan units while the KTM has a set of Brembos.

The CFMoto 800 MT's design looks functional. The front end has a sleek LED headlight unit and a large adjustable windscreen. A tiny beak looks part of the Adventure motorcycle design brief and you'll notice a pair of auxiliary lights as well.

The fuel tank appears to be large, with the tank extensions flowing neatly with the design. Unlike the KTM 790 Adventure's low slung fuel tank, this is conventionally placed.

CFMoto hasn't officially announced the price of the 800MT. However, online reports suggest that it should be priced around the 50,000 to 70,000 Yuan in the local market. That translates to roughly Rs 5.76 lakh to Rs 8.06 lakh.

The CFMoto is expected to go on sale in China soon, followed by the European markets. There is no word of CFMoto bringing the 800MT to India, as of today.