A look at what the Kawasaki Ninja 400 has to offer and how it stacks up against the competition. 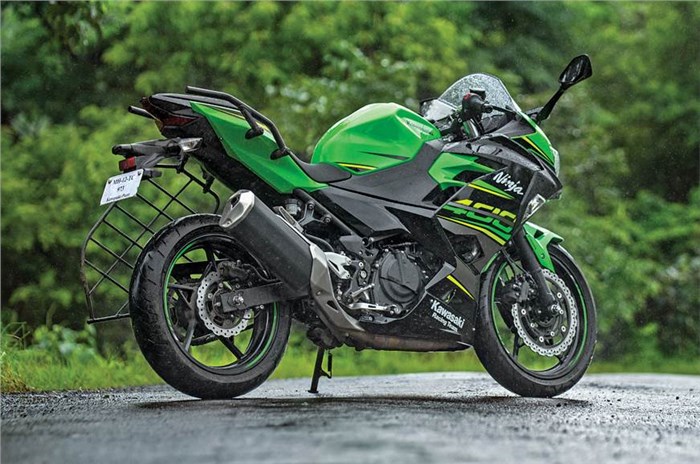 You can always count on Kawasaki to do evolution the right way and the Ninja 400 is the newest example of this in India. It is an obvious step up from the Ninja 300 but it doesn’t replace it as Kawasaki has offered a heavily localised version of the 300 with a cheaper price tag than before. However, the Ninja 400 is substantially better in every way and is a tempting proposition for those of you who want a fully faired, twin-cylinder motorcycle.

Unfortunately, Kawasaki has priced the Ninja 400 at an absurd price of Rs 4.69 lakh (ex-showroom, Delhi), which is understandably discouraging, but let’s go over the bikes strengths and weakness to figure out if it can somehow justify its price.

The Ninja 400 is sporty from every angle you look at it, and it has a good amount of visual mass that makes it appear to look like a bigger bike than a 400. While you can only have one in Kawasaki racing team colours, it’s not a paint job you’ll complain about.

Coming to its features, the Kawasaki Ninja 400 gets full-LED twin headlights, a slick negative LCD screen which provides good readability under all lighting conditions, and, importantly, a dual-channel ABS. Also standard are the new Dunlop Sports Max tubeless tyres which provide good grip even in wet conditions. Kawasaki has put in good effort to the build quality and finish as the mirror stocks and switchgear feel very premium. The not-so-nice news is that the fuel tank has gotten smaller (14 litres) as against the 17-litre tank on the Ninja 300, which combined with its higher power output means reduced range. It also misses out on adjustable levers which is unacceptable for a bike at this price. Lastly, the rider's seat is a bit too narrow at the front and is oddly contoured; you sit a bit too close to the fuel tank making it uncomfortable during long hours in the saddle. It’s also worth noting that the saree guard and grab handles – both of which the Ninja 400 is supposed to have by law – look out of place here; they can be removed, though.

The Ninja 400 is powered by a 399cc, twin-cylinder, liquid-cooled engine which boasts an increased bore and stroke as well as a higher compression ratio over the Ninja 300’s powerplant. This results in 49hp at 10,000rpm and is the most powerful in its class. The spread of power is even and the motor is exciting all the way up to 12,500rpm when the limiter kicks in. On the whole, the Ninja 400 provides uncompromising performance while still being very approachable – always a great combination to have.

Considering the above points the KTM RC390 is more aggressive as it offers similar levels of performance in a compact single-cylinder package. Though as far as small capacity twin-cylinder engine bikes are concerned nothing can match the Ninja 400 right now. The Yamaha R3 does come close in the real world, but the bragging rights belong to the Ninja 400.

The Ninja is at ease being flicked through corners and the stability on offer is excellent. Directional transitions come naturally and with the power to back it up, the Ninja 400 is an absolute hoot to ride. It is without a doubt a huge step-up from the Ninja 300 in this department and is also sharper and more dynamic than the Yamaha R3. Thankfully it has the breaks to match its speed and the 310 mm petal discs along with the dual channel ABS makes for strong and progressive breaking performance even in wet conditions.

Now the Ninja 400 is more committed than the 300 especially thanks to the higher set foot pegs but it’s still a good overall set-up for city riding. There is a slight ergonomic issue as the rider’s right foot stays in contact with the exhaust heat shield, which is an oversight that is not expected from such a well-established manufacturer like Kawasaki. For a bike of this price one also expects a sophisticated upside-down fork so it’s disappointing that Kawasaki has equipped the Ninja 400 with a conventional  41mm telescopic fork instead. Thankfully the Ninja 400’s overall set-up doesn’t hamper its real-world performance, though you might want to watch out for its firm rear suspension on bumpy roads.

The Ninja 400 is a very impressive motorcycle, it looks great, its built well and is fast enough so that you won’t feel the need to move to a faster motorcycle for quite a while. However, it’s the Ninja 400’s price tag that you can’t that you just can’t ignore considering you can have something like the Kawasaki Z650 from its own stable for just Rs 40,000 or thereabouts. The bike is undoubtedly better than the Ninja 300 which is almost Rs 2 lakh cheaper and certainly has the performance to dominate its segment, but with this kind of a price tag, it just isn’t a motorcycle for everyone’s appetite. All things considered, the Yamaha R3 priced at 3.49 lakh ex-showrooms Delhi would be the more value for money pick at the moment.