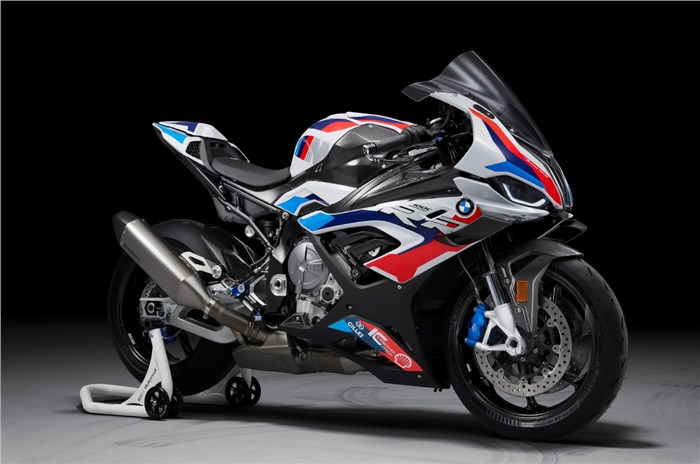 BMW Motorrad has launched the M 1000 RR , its first M-division motorcycle in India. The BMW M 1000 RR is available in two variants – Standard and Competition.

The most obvious difference between the two motorcycles is the new carbon fibre winglets or M-winglets in BMW speak. The winglets are said to provide a maximum aerodynamic downforce of 16.3kg at 186mph or 299kph. On the whole, the M 1000 RR looks aggressive and purposeful, complemented by a M sport colour scheme.

In terms of equipment, the motorcycle's 6.5-inch TFT screen has a special starting animation with an M logo. It also gets an OBD interface that can be used with an activation code for the M GPS data logger and M GPS laptrigger, available with the Performance pack.

The BMW M 1000 RR's 999cc engine makes more power than the S 1000 RR and this has been achieved by using new two-ring forged pistons and each piston is lighter by 12g. The titanium connecting rods are 2mm longer and lighter, with each weighing a mere 85g. BMW has also employed slimmer and lighter rocker arms, revised the intake port geometry, used titanium valves on the exhaust side and raised the compression ratio to 13.5:1. All of these changes result in a 5hp increase in power over the S 1000 RR and a redline that's pushed to 15,100rpm, from 14,600rpm on the S 1000's engine. The specs stand at 212hp at 14,500rpm and 113Nm at 11,000rpm. The engine is paired to a 6-speed gearbox with a slip and assist clutch.

BMW claims the motorcycle completes the 0-100kph run in 3.1sec and can hit a top speed of 306kph.

The BMW M 1000 RR's chassis is based on the S 1000 RR's, with the frame made of aluminium. The steering geometry has been optimised, with a flatter steering head angle, at 66.4 degrees, and reduced fork offset, by 3mm, at 26.5mm. Besides this, the wheelbase has also been increased from 1,441mm to 1,457mm, achieved by employing a longer swingarm. The brakes have been developed in association with Nissin and the calipers are finished in an M-division specific blue paint. These calipers are lighter and bite on to thicker discs than those on the S 1000 RR.

As expected of a motorcycle of this class, the electronics suite is pretty comprehensive. There are five ride modes – Rain, Road, Dynamic, Race and Race Pro. The motorcycle also gets launch control, bi-directional quickshifter, Hill Start Pro and a pit lane speed limiter as standard.

The M 1000 RR can be booked at all BMW Motorrad showrooms in India. Prices begin at Rs 42 lakh for the Standard variant and Rs 45 lakh for the Competition variant. The extra money gets you an M GPS laptrigger software and the corresponding activation code, M milled parts package, the M carbon package and lighter swingarm. You also get BMW's new DLC-coated, maintenance-free M-Endurance chain, while the passenger package includes a tail-hump cover.