At Rs 1.69 lakh, the Benelli Imperiale 400 is priced close to the Jawa Forty Two and Royal Enfield Classic 350. 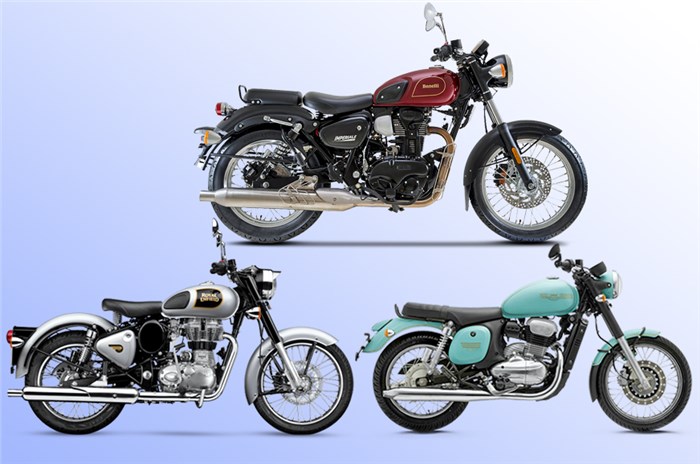 It was not too long ago when Royal Enfield had no direct rivals in India. The retro bike brand had the monopoly, and their impressive sales told the same story. It was only in November last year that the company got its first direct rival, which coincidentally happened to be from Royal Enfield’s competitor in India back in the 70s – Jawa. The Jawa brand was reintroduced India with not one but two retro offerings, namely the Jawa (the name is just Jawa, nothing else) and Forty Two.

The classic style Jawa is the more direct rival, in terms of design, but the Forty Two is the more popular model and it is also more affordable, which is why we’ve considered it here. We had compared the Classic 350 and the Forty Two on paper back then, and it proved to be one of our most popular spec comparisons, head here for it. Now, there’s another contender in this space, called the Benelli Imperiale 400, and its retro styling comes at a price tag that pitches it squarely against these two.

Powering the Imperiale 400 is a 374cc, single-cylinder engine that produces 21hp at 5,500rpm and 29Nm of torque at 4,500rpm. The power and torque figures are close to those of the Royal Enfield Classic 350 that makes 19.8hp/28Nm. The Jawa, meanwhile, is almost in a league of its own as it makes 27hp and 28Nm of torque from its 293cc engine. It is worth noting that Jawa is unwilling to share the RPM numbers with us, but our experience in the first ride review tells us that this engine produces its peak power figures at a higher RPM than its rivals. It manages to put out the highest numbers despite being the lowest capacity engine, thanks to the modern technology used. For instance, it’s the only one to use DOHC control for the valvetrain. It is also the only motor to come paired with a 6-speed gearbox. The Benelli, on the other hand, uses a SOHC design and a 5-speed gearbox, while the Enfield uses an old-school OHV and 5-speed gearbox setup.

The Jawa is also the only one that is liquid-cooled, the Classic and Forty Two are air-cooled motors. Another feature the old-school Classic 350 misses out on is fuel-injection, whereas the Benelli and Jawa feature it.

If the power-to-weight ratios are anything to go by, the Jawa Forty Two will be unbeatable when it comes to how the bikes get going. With a kerb weight of 170kg and 27hp, the bike puts out 158.8hp/tonne. In comparison, the Royal Enfield and Benelli, make 102.4hp/tonne and 102hp/tonne, respectively.

What's different, however, are the tyre and wheel sizes. The Forty Two uses an 18-inch front and 17-inch rear setup, while the Royal Enfield and Benelli, both get a 19-inch front wheel and an 18 incher at the rear. Tyre widths differ slightly as well, which you can refer to in the table above.

Anchorage at the front, on the Jawa and Enfield, is provided by 280mm single discs, while the Benelli gets a slightly larger 300mm disc. At the rear, though, both, the Royal Enfield and Benelli can only be had with a disc brake setup, while the Jawa can still be optioned with a 153mm drum brake. The Royal Enfield and Benelli, both offer dual-channel ABS as standard, but Jawa offers dual-channel ABS with the rear-disc model for an extra Rs 9,000.

The Imperiale 400 is said to be a reinterpretation of one of the manufacturer’s historic models produced in the 1950s. This is apparent from the classic-looking tank, round headlights, flat seat, and minimalistic panels. Much like other retro-themed bikes – the Jawas and the Royal Enfields – this one too has a long rear fender. Interestingly, both, the Benelli and the Royal Enfield Classic also have a sprung seat for the rider and rubber knee pads on the tank.

While the Jawa model is heavily inspired by the brand’s classic bike, the Forty Two is slightly more affordable and has a more urban and modern theme, with matte-black elements replacing some of the chrome bits, similar to the Benelli. In that regard, the Royal Enfield stands out, as it still has dollops of chrome, but there are some colour schemes available with a blacked-out treatment for the engine and exhaust.

As for the instrumentation, the Benelli uses a twin-pod layout that features a large RPM gauge (it's the only one here to get a rev counter) and speedometer, along with a small digital display for the odometer; it also features a fuel gauge. The Jawa, on the other hand, uses a single-pod unit that displays the speed and fuel gauge. Its cluster also has a small digital screen for the odometer. The Royal Enfield has the least informative instrumentation of the three – it only has an analogue gauge for the speed, along with a conventional odometer. The Royal Enfield also misses out on a fuel gauge and makes do with a low-fuel light instead.

On paper, it is the Jawa Forty Two that manages to trounce the Royal Enfield Classic 350 and the Benelli Imperiale 400. It has a modern engine with a better power figure, additional gear, a fuel gauge, a slightly larger fuel tank, and a significantly lower kerb weight.

It does all of this without being the most expensive bike in this comparison as well. To give you an idea of the how the three compare when it comes to their price, the Royal Enfield Classic 350 is the most affordable, at Rs 1.54 lakh. Sitting above it is the Jawa Forty Two (with rear disc), at Rs 1.64 lakh, and Benelli Imperiale 400, at Rs 1.69 lakh. The Benelli is highly localised but not fully manufactured in India and that could be a reason for it being the most expensive model of the three. That being said, its price can still be considered competitive and it is by far the most affordable motorcycle Benelli has sold in India to date.

However, this is not the end of the story and there are many other things to consider. While Royal Enfield has well over 800 dealers and Jawa over 100, Benelli currently has less than 30 across India. At the same time, Jawa has been struggling to deliver bikes and waiting periods are currently as long as 11 months in many cases. Royal Enfield, too, is working on an all-new platform that will debut sometime next year, and it is expected to be a huge leap forward.