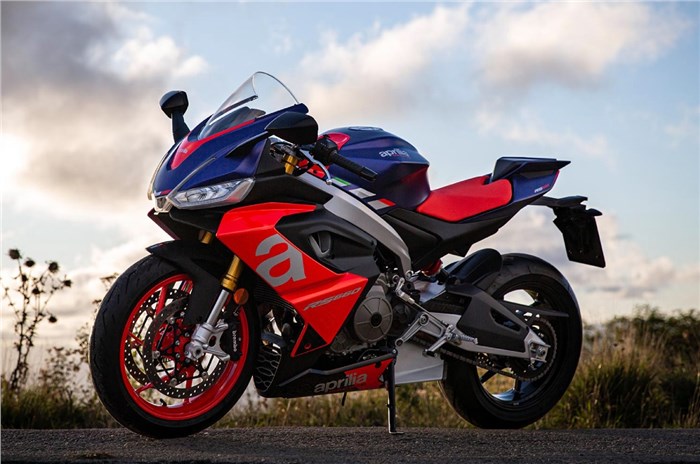 Aprilia, in typical fashion, has come up with a sleek and sporty design for the new RS660. The production motorcycle borrows design cues from its bigger sibling, the Aprilia RSV4.

That said, the Aprilia RS660 carves out an identity of its own, apparent in its sharp twin LED headlamps and the DRL with integrated turn indicators, that seamlessly merge with the creases on the front fairing. The LED headlamp also has a nifty cornering lamp function.

The side fairing looks equally arresting with its cuts and creases, while the exposed aluminium frame stands exposed in a typical Aprilia sort of way.

While the overall design is quite striking to look at, what adds to this effect are the colour options- Lava Red, Black Apex and Acid Gold. The colour that pops out the most among the three options is Acid Gold.

As far as ergonomics are concerned, Aprilia RS 660 features relatively relaxed ergonomics, a comfier seat and useable power than the super committed RSV4.

It's not just the design but the engine too that has a bit of the RSV4 in it. And this we mean in a literal sense.

Expect the upcoming Aprilia Tuono 660, which was displayed in concept form along with the production ready RS 600 at EICMA 2019, to feature the same engine.

The Aprilia RS660's dual beam frame features a removable seat support subframe. It has a 1370mm wheelbase, 24.1 degree rake and 104.6mm trail, which should entail a flickable nature.

The suspension components include a 41mm Kayaba USD fork, adjustable for spring preload and rebound damping. At the rear, there is a monoshock that is also adjustable for rebound and preload.

Braking duties are carried out by twin 320 discs at the front with four-piston Brembo radial calipers and a 220mm disc at the back with two pistons Brembo.

Aprilia has launched the RS660 in international markets at £10,149 or Rs 9.7 lakh. Bookings for the motorcycle begin today onwards.

Aprilia has not paid much focus to its big bike range in India, but it does import some high capacity models as CBUs. However the sub 800cc RS 660 may have to come in as an SKD or CKD model, at the very least, and Aprilia has put its CKD plans on the back burner now.