Hero showcased the pre-production version of the XF3R concept that was showcased at the 2016 Auto Expo. 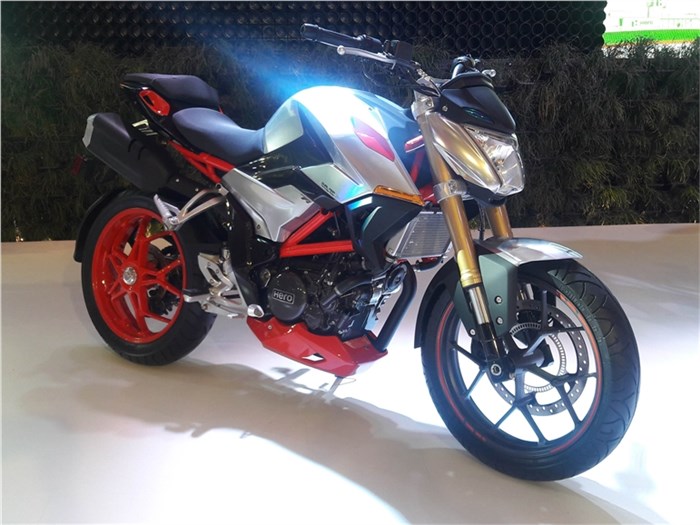 Production 300cc motorcycle will be derivative of the Hero XF3R.

Our sister magazine Autocar Professional has learnt Hero is readying a larger, near 300cc, single-cylinder performance-oriented motorcycle too. While there is uncertainty over whether the model will be shown at Auto Expo 2018 or revealed later on, it is understood the motorcycle will only go on sale around the middle of 2018.

The 300cc motorcycle is said to be derived from the XF3R concept bike that was shown at Auto Expo 2016. According to Autocar Professional’s sources privy to the project, the new motorcycle is in the final stages of validation. The new 300cc model, along with the incoming 200cc Xtreme and the XPulse adventure motorcycle (revealed at EICMA 2017), will sit atop all other products in Hero’s portfolio and will mark Hero’s foray into the growing mid-size motorcycle segment.

The new 300cc motorcycle will be positioned as the natural upgrade option for many of its existing customers who have been riding executive commuter motorcycles. Replying to Autocar India / Autocar Professional’s query on the sidelines of the EICMA Show in Milan in November 2017 on Hero MotoCorp’s plan of retaining its large customer base with new premium and aspirational products, Pawan Munjal, CMD, Hero MotoCorp, had said, “I am sure when you will see me after the Auto Expo, having seen this (the XPulse) and some of the products at the Auto Expo and the directional posture that Hero MotoCorp has taken, you will change your view. We are putting a lot of focus on some of the areas such as the high growth segments.”

Besides rivalling the KTM’s 250 and 390 Duke motorcycles, the Hero XF3R will potentially compete with all the motorcycles that are slated to spawn out of TVS-BMW’s single-cylinder, 313cc engine platform in the near future. This would include TVS Motor’s recently launched Apache RR 310 and the anticipated BMW Motorrad models – G 310 R and G 310 GS – which are scheduled for an India rollout later this year.