India-bound 2020 Triumph Rocket 3 R and Rocket 3 GT boast of a 2,500cc engine that develops 221Nm of torque: figures unseen and unheard of on a production motorcycle. 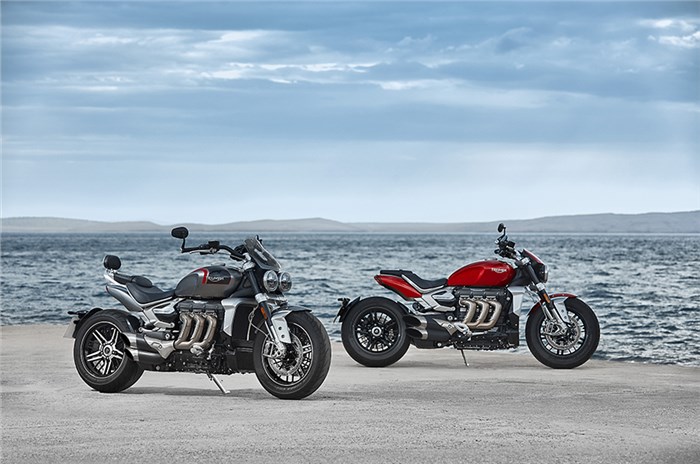 Triumph Motorcycles has just taken the wraps off the production-spec 2020 Rocket 3 a few months after launching the limited edition 2020 Rocket 3 TFC which, if you are wondering, has already sold out.

Triumph will launch two versions of the 2020 Rocket 3 R and GT. The former is more of a street-oriented roadster while the GT, as the name suggests, is the cruiser version. Both motorcycles share the same engine and the specs are truly mind-boggling.

Triumph says that the new 2,500cc engine (2,300cc in the previous Rocket 3) is the largest motor fitted to any mass-produced motorcycle. The liquid-cooled, in-line, three-cylinder mill develops 167hp at 6,000rpm (11 percent more than the previous generation) and a gut-wrenching 221Nm of torque at 4,000rpm. To put things in perspective, the L-twin motor of its direct competitor, the Ducati Diavel 1260, develops 129Nm of peak torque. Triumph claims the new Rocket 3 can complete the 0-100kph run in 2.79sec only.

The new engine is also significantly lighter (by 18kg) and Triumph managed to achieve this by designing a new crank case assembly, lubrication system and balancer shaft. Overall, the new Rocket 3 is, in fact, over 40kg lighter than its predecessor. The Rocket 3 R weighs 291kg while the Rocket 3 GT tips the scales at 294kg.

Considering the colossal power and torque produced by the new Rocket 3 engine, Triumph has equipped the motorcycle with a new set of IMU-supported electronics to keep things from getting out of hand. The new model gets a lean, sensitive traction control and cornering ABS as standard. There are four riding modes as well – Rain, Road, Sport and Rider that allows custom settings.

The new Triumph Rocket 3 R and Rocket 3 GT look stunning and there’s nothing quite like these motorcycles in the Triumph product portfolio. Compared to the previous Rocket 3, the new ones look like proper power cruisers with a much sleeker and meaner design than the previous-gen Rocket. At first glance, the huge engine and the dual-barrel exhausts catch your eye. The twin LED headlamps, with integrated DRLs also look striking; while the large fuel tank and minimal tail-section rounds off the bike's distinctive design. We can’t help but stay glued to the way the huge engine occupies pride of place. It almost seems as if the bike is designed and built around the engine

Triumph has also incorporated its second generation's TFT instrument cluster (similar to the Triumph Scrambler 1200) that has multiple screen modes and can be paired to smartphones via a Bluetooth module accessory that’s sold separately.

The Rocket 3 R, as we’ve mentioned, is a roadster. Hence, it has a sportier riding position and a flat, single-piece handlebar. The Rocket 3 GT has a slightly relaxed riding position, with forward-set foot pegs, a slightly pulled-back handlebar and a lower seat height, at 750mm (773mm on the R model). In addition, the GT gets a fly-screen, heated grips and a height-adjustable backrest for the pillion.

The alloy wheel design is the same on both models, except for the chrome accents on the GT. Both motorcycles run on massive, specially designed Avon Cobra tyres sized 150/80 R17 at the front and 240/50 R16 at the rear. All in all, the new Triumph Rocket 3 looks stunning, to say the least.

The new Rocket 3 bikes have a new, all-aluminium frame with the engine as a stressed member suspended by 47mm, compression and rebound adjustable, Showa USD forks (120mm travel) at the front; and a monoshock at the rear with a Showa piggyback reservoir and remote adjuster (107mm travel).

The brakes are another highlight with twin, 320mm discs at the front with superbike-spec Brembo Stylema four-piston monobloc calipers (same as on the Ducati Panigale V4) and a 300mm disc at the rear with Brembo M4.32, four-piston calipers.

Triumph has also rolled out a long list of accessories with the new Rocket 3 motorcycles, some of which include luggage panniers, a quickshifter and auto blipper.

The new Triumph Rocket 3 and Rocket 3 GT will be showcased at the 2019 EICMA in November. We expect the bikes to go on sale in India sometime next year.