Powered by a 208hp engine, making it one of the most powerful street-naked motorcycles around. 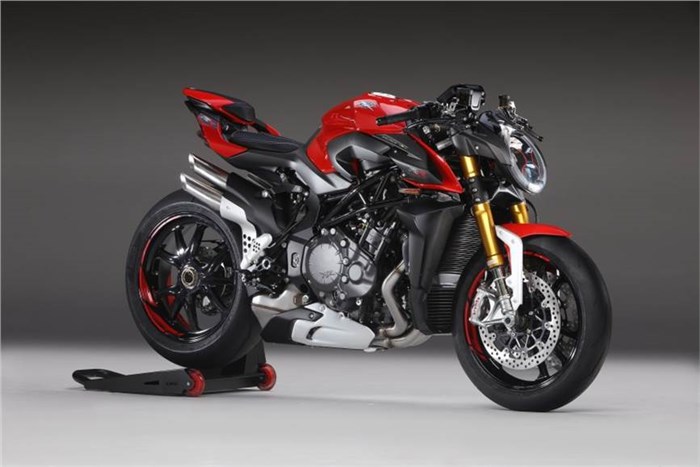 MV Agusta has taken the wraps off the 2020 Brutale 1000RR – its flagship supernaked based on the limited edition Brutale 1000 Serie Oro that was launched a few months ago. The new MV Agusta Brutale 1000 RR is, in essence, the mass-production version of the Serie Oro, albeit without some of the ultra-exotic components like carbon-fibre wheels. Nevertheless, it looks every bit the MV Agusta that it is.

The oval-shaped headlamp, large tank and tiny tail, with the integrated LED light, all look striking; as do the aero fins next to the radiator. The oval-shaped full-LED headlamp features IMU-assisted cornering lamps. MV Agusta has also used carbon fibre in places, adding both a visual and functional effect to the bike. Being a mass-produced motorcycle, the Brutale 1000RR is fastened down using steel bolts – not titanium ones, as on the Serie Oro. The bike also gets forged aluminium wheels instead of the carbon-fibre units that its expensive sibling sports.

A second-generation, high-resolution, 5.0-inch colour TFT display serves as the interface to toggle through a vast menu and alter the Brutale’s eight-level traction control system and rider modes. As expected, the electronics are IMU-assisted.

While the Brutale 1000 Serie Oro produces an astonishing 211hp, the same motor in the RR makes slightly lower power. At 208hp, the bike's output is identical to that of the new Ducati Streetfighter V4’s engine. MV has also tweaked the internals of the engine, adding new valve guides and camshafts. Also, the new crankshaft is designed to reduce vibrations at low revs. The engine’s intake system is new, with unequal length ducts to optimise engine efficiency. MV Agusta claims that the Brutale 1000RR will sprint to a top speed of 300kmph.

The chassis dimensions are the same as the Serie Oro and the Brutale 1000RR also gets an electronically adjustable suspension and steering damper. The Brembo Stylema brakes have also been carried over from the special edition Brutale.

The bike is priced around the Rs 25 lakh mark in overseas markets and we expect the bike to sport a higher price tag if MV Agusta brings this bike to our shores.