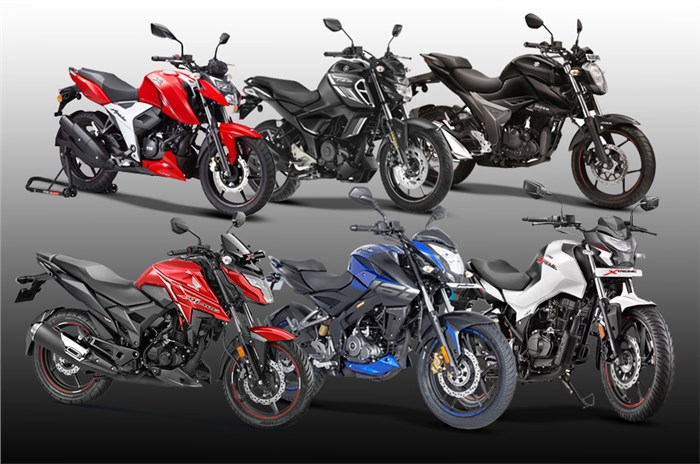 With the X-Blade, Honda aims to take on other entry-level sport-nakeds. Here’s how it fares in comparison, on paper.

Honda recently launched the BS6-compliant X-Blade, with prices starting at Rs 1.06 lakh. The new motorcycle finds itself in a very competitive segment, which includes the new Hero Xtreme 160R, TVS Apache RTR 160 4V, Suzuki Gixxer, Yamaha FZ V3.0 and the Bajaj Pulsar NS160. We’ve compared their specifications on paper to see which one comes out on top.

What are the standout design elements on the entry-level sport-nakeds?

Honda hasn’t made any extravagant cosmetic changes to the BS6 X-Blade. The overall design remains largely unchanged, but the tank shrouds are now finished in the same colour as the rest of the bike and the tank and tail section feature new graphics. Meanwhile, the mid-section of the motorcycle and the panels below the tank have received a textured finish. The bike also sports a sleeker belly pan.

The Xtreme 160R is based on the bold and aggressive-looking Xtreme 1R concept from EICMA 2019, and is easily one of the sharpest-looking motorcycles in Hero’s current line-up. Unlike the Xtreme 200R that features a more conventional design, this motorcycle appears to be a lot more sporty, and design elements like the stubby exhaust accentuate this. It’s also the freshest design in this 150-160cc lot of bikes.

The Apache RTR 160 4V has always had a well-proportioned design. In the transition to its BS6 avatar, the RTR 160 dons a new face that makes the bike look a lot more aggressive. Meanwhile, the Gixxer received its last significant visual update a year ago with a standout design element being its flat LED headlamp. The rest of the bike remains largely unchanged from its previous iteration, except for elements like the new tank shrouds that were added to freshen things up. Overall, it is a clean-looking bike and has a sporty stance that fits right into this segment.

The Yamaha FZ didn’t undergo any changes in design with its transition to BS6, but it did when the V3.0 was launched back in 2019. Its updated bodywork retains the sharp, muscular profile of the FZ series and has a wider front-end stance as a result of wider panels and side shrouds around the tank. Lastly, the Pulsar NS160 retains its sharp design and despite being the oldest here, doesn’t show any signs of age.

How do the entry-level sport-nakeds compare on features?

All the bikes here, barring the NS160, are equipped with digital display units; the Bajaj uses a semi-digital console. Of these, the Xtreme 160R uses a negative-display unit, while the console on the X-Blade, Gixxer and the Apache are conventional black text on a white background. The instrument clusters on all the bikes use a very similar horizontal layout and display the same levels of information, with a tachometer across the top. Honda has also updated the switchgear on the X-Blade with an engine start-stop switch and a hazard light button.
The Xtreme also comes equipped with a side-stand engine cut off and hazard lights, but the Apache really stands out here with what it has to offer – the manufacturer’s Glide Through Technology (GTT) helps make slow-speed riding easier by moving the bike forward when the clutch is released, without throttle operation. The maximum speed with GTT is restricted to 7kph in first gear, 12kph in second gear and 17kph in third gear.
All the bikes here, except the NS160, also feature an LED headlight.

How do the entry-level sport-nakeds compare on powertrains?

*Calculated with kerb weight of disc brake variant
The updated X-Blade is powered by the same 162.7cc, single-cylinder, fuel-injected engine that was introduced on the Unicorn. On the X-Blade, it produces peak output figures of 13.86hp at 8,000rpm and 14.7Nm at 5,500rpm. In comparison to the BS4 model, peak power remains the same, but peak torque has increased. In fact, the 14.7Nm that the X-Blade produces is the highest torque figure in its present company.
The Xtreme 160R is powered by a new, BS6-compliant 163cc, single-cylinder, air-cooled engine that produces 15.2hp and 14Nm. With these peak output figures, it’s not the most powerful bike here. In fact, the Apache and the NS160 produce more power and marginally more torque. However, the Xtreme’s noticeably lower kerb weight means that its power-to-weight ratio is at par with both the aforementioned motorcycles. The Apache and Pulsar are also the only motorcycles here that use an oil-cooled engine with four-valves, in comparison to the air-cooled, 2-valve engines on the X-Blade, Xtreme 160R, Gixxer and FZ.
The Gixxer lost 0.5hp and 0.2Nm when it achieved BS6-compliance. The FZ, too, saw a drop in peak output figures with the transition to BS6 and produces the lowest peak output figures of the lot. All six bikes use a 5-speed gearbox.

This is where all six bikes are quite similar – they all feature a telescopic fork and a monoshock. The X-Blade, Xtreme 160R and Apache RTR 160 4V sport a disc brake at the front, with the option of a drum or a disc at the rear, while the other three are available with a disc at either end.
Like we mentioned earlier, the Xtreme is the lightest bike here at 138.5kg, but the Gixxer isn’t too heavy either, with a 140kg kerb weight. The X-Blade weighs a few kilos more at 144kg and the Apache, meanwhile, weighs considerably more, at 149kg. The Pulsar is the most powerful bike here, but also the heaviest with a kerb weight of 151kg.
All six bikes ride on different tyre sizes and you can take a look at them in the table below. The Gixxer has the widest rear tyre, while the front tyre on the Apache and Pulsar – the two most powerful bikes here - are the slimmest. Interestingly, if you opt for the RTR 160 4V with a rear drum brake, you’ll get a slimmer 110/80-17 section tyre, whereas rear disc models come equipped with a 130/70-17 rear tyre.

The new X-Blade, with its base price of Rs 1.06 lakh, slots itself right into the middle of this category. On paper, in terms of what they have to offer, all five bikes seem neck and neck. However, the X-Blade does have what it takes to match the performance, practicality and comfort of its most direct rivals. Only a head-to-head road test will give us the answer, as to which motorcycle is the king of the 150-160cc sport-naked segment.