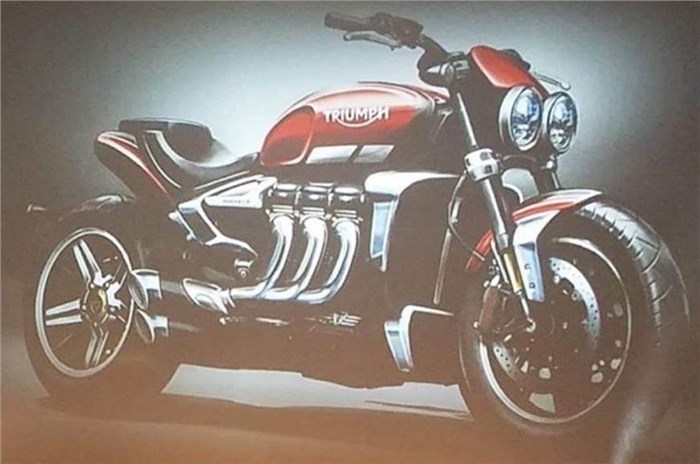 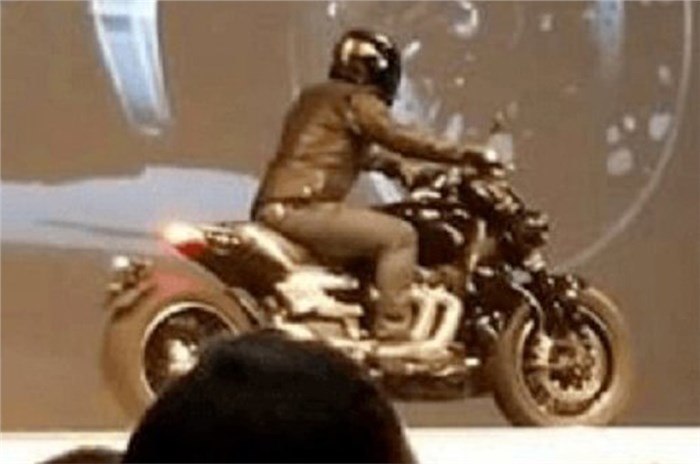 Triumph has continuously been in the news for the launch of either updated models or all-new bikes. However, there were two well-known bikes the British motorcycle maker hasn’t touched in the past few years – the Daytona and the Rocket III. Leaked images of the latter have finally made news and it appears to be a big one, literally!

Two images of the Rocket III have made an appearance – an official Triumph design sketch that was revealed to dealers in October and the second one being an image of a pre-production test bike that was ridden across the stage during the same event. The sketch reveals that the big cruiser is going to get massive styling changes, with many contemporary design elements. The sketch shows that the motorcycle continues to use its iconic twin round headlights. However, they don’t appear to stick out as much anymore. Right above the headlights is a body-coloured flyscreen. The front mudguard has also been redesigned and looks like it belongs on a sport-naked rather than a cruiser.

The tank on the massive motorcycle also has a new shape; it is now similar to ones found on the company’s Bonnevilles, albeit in a more chiselled form. The biggest changes can be found towards the rear – the tail is now raked upwards and ends before the tyre does (similar to the Rocket’s rival, the Ducati Diavel). Triumph also appears to have switched to a monoshock and a single-sided swing arm set-up on the new motorcycle; both these features are also seen on the Diavel. Going by this, it’s fair to expect a whole new chassis set-up, hopefully one that will be significantly lighter than the previous 367kg Rocket III that was sold in India.

We also expect see multiple mechanical updates on the motorcycle. The 2019 Rocket will get revision to its gigantic three-cylinder motor. Rumours suggest that the displacement could go from 2,300cc to somewhere around 2,500cc. The increase in capacity is also expected to increase the power and torque figures. The current model (which is on sale in the United States) makes 148hp and 221Nm of torque. Reports suggest the horsepower figure on the new bike will go up to around 180hp.

Other mechanical updates will include updated brakes. The 2019 Rocket III is expected to get large brakes with what looks like Brembo M50s (also seen on the new Triumph Scrambler 1200 we just rode) at the front. We expect to see a see a revised riding position thanks to the wider handlebar and repositioned footpegs. The 2019 Triumph Rocket III will also get a host of other modern-day equipment like LED lighting, cornering ABS, riding modes and a TFT colour instrument cluster.

Back in 2014, the Triumph Rocket III costed a little over Rs 20 lakh (ex-showroom, Delhi).  Expect the new model to be priced slightly higher than the old bike. Whether Triumph will bring it in as a CKD or a CBU remains to be seen, but we expect to see more of this bike (and hopefully ride one too) sometime in 2019.