Here are five things you need to know about the Bonneville Bobber-based cruiser. 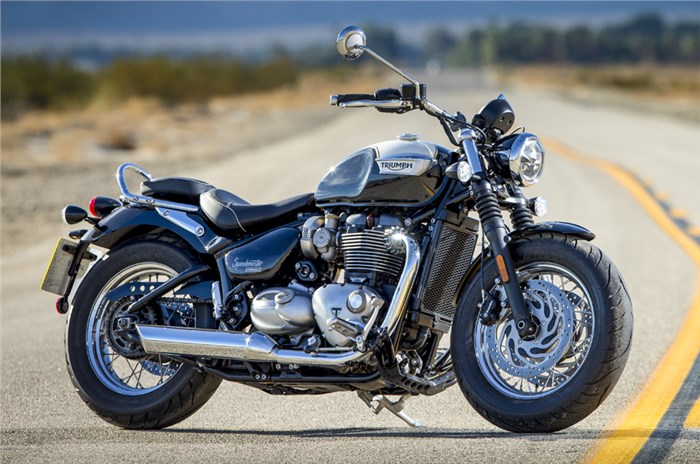 The history
The Speedmaster is not a new name for Triumph. The first Speedmaster made its debut in 2002 and was based on the Bonneville America, which was a longer, lower and more cruiser-like Bonneville. We never got the last-gen Speedmaster in India, but we are getting the new one. The original Speedmaster was designed as a factory custom machine and the new one retains that identity, but the motorcycle itself is a quantum leap forward. Triumph says the Speedmaster is aimed at riders who like the Bonneville T120, but who want more laidback style and some more touring capability. Another group of interested customers will be fans of the Bobber, but those who need the practicality of a twin seat setup.

Underpinnings
Based on the Bobber platform, the Speedmaster shares the same wheelbase but gets different steering geometry with a slightly smaller rake angle.  Fork size remains 41mm, but it gets a new open cartridge design while the rear shock is a similar hidden monoshock as seen on the Bobber but with a different, dual rate spring. The Speedmaster uses the same wheel and tyre size as the new Bobber Black; a fat 130/90-section front tyre and a 150/80-section at the rear by Avon. Braking is taken care of by twin 310mm discs and dual piston Brembo calipers, just like on the new Bobber Black. The Bonneville T120 also uses a 310mm dual disc setup, but with Nissin calipers.

Powertrain
The Speedmaster uses the 1,200cc parallel-twin in Bobber tune. This means it offers slightly more torque, with a focus on mid-range punch but sacrifices 3hp of power to the T120. Maximum power is 77hp at 6,100rpm, while peak torque of 106Nm arrives at a low 4,000rpm. Triumph claims 10 percent more power and torque than the Bonneville T120 at 4,500rpm. The Speedmaster also gets similar slash-cut exhausts like the Bobber. With a dry weight of 245.5kg, the Speedmaster is 8kg heavier than the Bobber Black and a good 21.5kg heavier than the Bonneville T120.

There are also two ‘Inspiration packs’ on offer which essentially offer a collection of accessories to mod the bike in a certain flavour. The 'Highway' kit adds a large, adjustable windscreen, leather panniers, comfort seats and a smattering of chrome trim. The second kit is called the 'Maverick’ and this adds a meaner, pared-back look with a single seat, flatter and lower handlebars and a blacked-out Vance & Hines exhaust system.

Launch date and pricing
Triumph unveiled the Bonneville Speedmaster at India Bike Week 2017. The British marque has now said that it launch the Speedmaster in India on the February 27, which is less than a week away. We had predicted this launch time in our upcoming bikes for 2018 back in December 2017. Going by its UK price tag, we expect the Speedmaster to be priced at Rs 10.5 lakh (ex-showroom), which is a justified increment over the Bobber considering the extra equipment and finish on offer.

Triumph Speedmaster to be launched on February 27