With Triumph having recently launched the new 1200 Explorer, we see how it stacks up against its rivals, the Ducati Multistrada 1200 Enduro and the BMW R 1200 GS Adventure. 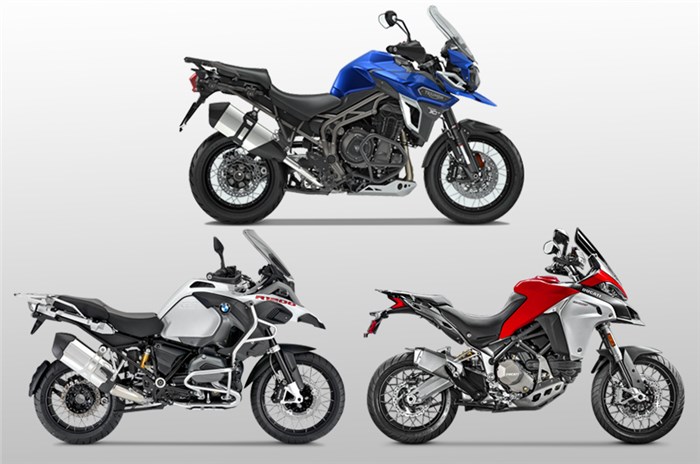 This new Tiger 1200 Explorer has been long awaited. While not exactly fresh off the drawing board, in India we had to make do with the older 2014 model. And to be honest, that model was falling woefully short in terms of features and electronics when compared to the new state-of-the-art Ducati Multistrada series and now the recently launched BMW GS series.  Well, Triumph is finally back in the large-displacement adventure-tourer game with this heavily updated model. Although things may look like they haven't changed much on the surface, this new bike is a very different animal. So before we have a chance to ride it and report back from the real world, let's delve into the features and specifications to see how it fares in behemoth territory.

One of the best things about this segment is that all three motorcycles have a different engine layout, which gives them very distinct individual characters. The Triumph gets an inline-triple, the Ducati an L-Twin, and the BMW gets a Boxer-type Flat-Twin cylinder layout. While the 1,215cc Tiger Explorer gets the most displacement, the Multistrada Enduro gets a Desmodromic 1,198cc engine with variable valve timing, while the R 1200 GS Adventure gets a 1,170cc engine. Of course, displacement aside, engine output tells a slightly different story; the Ducati puts out an explosive 152hp, the Triumph 139hp and the BMW a respectable 125hp.

During our earlier comparison test between the Multistrada Enduro and the 2014 Tiger Explorer XC, the Multistrada definitely outperformed its Triumph competitor. Despite its gargantuan size, we were immensely impressed with the Ducati’s off-road potential – an area where the Triumph didn’t shine too well. We expect that to have improved on the new Tiger Explorer model.

These three motorcycles are designed to conquer continents – to cover immense distances on tar and on dirt, while keeping the rider in utmost comfort. And with the new Tiger Explorer, the updated components put it on par with the Enduro and the GS. It now gets WP suspension with a 48mm inverted fork at the front and a monoshock at the rear; the front gets electronically adjustable damping at the front, while the rear gets a semi-active electronic damping setup. This suspension gets 190mm of travel at the front and 193mm at the rear; which is good as it is, it’s just that the Ducati and BMW offer a bit more. The R 1200 GS Adventure gets BMW Motorrad Telelever suspension, with stanchion diameter of 37mm and a central spring strut at the front, while the rear gets a spring pre-load hydraulically adjustable monoshock (continuously variable) with adjustable rebound damping. Being a fairly off-road capable machine, it gets 210mm of wheel travel at the front and 220mm at the rear. But it’s the Ducati that takes the cake; the Multistrada 1200 Enduro gets a fully adjustable Sachs unit with Ducati Skyhook Suspension (DSS) that has electronic compression and rebound damping adjustment. Both wheels get 200mm of travel.

In terms of rider compatibility, the Tiger Explorer gets the most rider-friendly seat for the general Indian body size. It gets an 837-857mm adjustable seat, with the low-height option being a very manageable 785-805mm. Things get a little higher on the Multistrada Enduro, with an 850mm seat height that gets even taller options of 870-890mm. The tallest of this lot is the R 1200 GS Adventure – it gets an 890mm seat height that won’t be very inviting to shorter riders. In terms of range, the BMW and Ducati should get a bit further with their 30-litre fuel tanks as compared to the 20-litre one on the Triumph. But we also expect the BMW and Ducati to be a bit top-heavy when fully fuelled up.

These three behemoths are only rideable because of the advanced electronic packages they come with. An area where the Tiger Explorer fell woefully short before, it now gets all the bells and whistles that keep it astride with the competition. All bikes get riding modes, power modes, traction control, cruise control, ABS, power sockets and adjustable screens. The new Tiger Explorer, however, gets an electronically adjustable screen. And, along with the Multistrada Enduro, it also gets cornering ABS and cornering traction control thanks to six-axis Inertial Measurement Units. In addition to that, the Enduro also gets Ducati Wheelie Control, a full-TFT instrument cluster and cornering headlights.

Triumph is finally back in the apex adventure-tourer game with its new Tiger Explorer for 2017.  Despite the Ducati having a bit more features and holding strong off-road credibility along with the BMW, on paper, they don’t seem to be as rider-friendly as the Explorer. Combined with the very competent Inline three-cylinder engine, and heavily updated firepower, we expect the new bike to have a lot of potential. Though it is slightly priced higher than its competition, we look forward to testing this bike in the real world and seeing if it justifies this price tag.