The stylish maxi-style scooter’s time in the Autocar long-term fleet comes to an abrupt end. 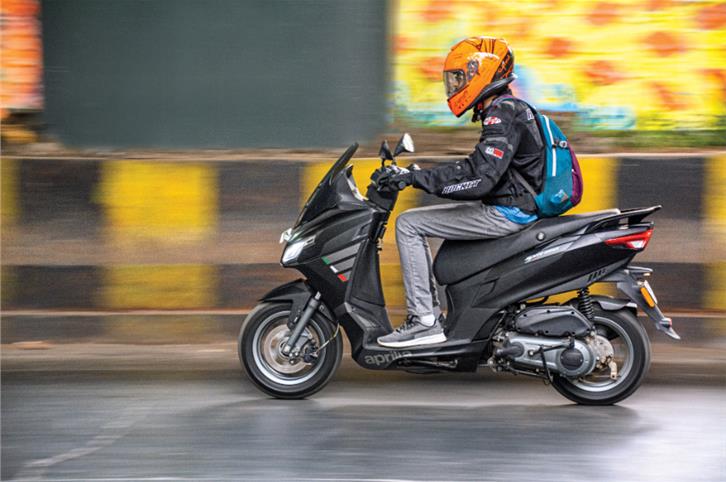 After spending a good few months with Rishabh, the Aprilia SXR 160 was back in my possession. Having been given the keys to our Ather 450X long termer (read more about it on the next page), Rishabh wasn’t able to put as many miles on it as he wanted to and so I drafted the SXR in as my ride to the office.

First up, the SXR 160 has made what is usually a mundane 14-km ride to office quite enjoyable. This scooter makes light work of Mumbai’s heavy traffic, thanks to its grunty engine. There’s always enough power on tap to help you squeeze through gaps and make that quick overtake. And it manages to outpace your usual crop of commuter scooters and motorcycles as well.\ Another thing I love about the SXR is its styling. I think it’s one of the best looking scooters on sale in the market today. The angular front apron, stylish alloy wheels, and matte black paint make it stand out instantly in a crowd. I also found the SXR’s brakes to be one of its highlights. They are confidence inspiring, with a nice initial bite followed by progressive stopping power. There are also no rattles or loose panels to report of; the SXR has held up quite well on our pothole-riddled streets. It’s a great-looking scooter that stands out from the crowd.

However, there are a few things that I’m not a fan of. For starters, while the matte paint looks cool, it catches dust very easily and is difficult to keep clean. I even found the storage place in the front apron inadequate, as the best you can fit in there is a small bottle of water and a smartphone (the USB charger is placed there). Powered by a 160cc engine, the SXR is also not the most fuel-efficient scooters around and has been quite heavy on my wallet. The seat is large but quite hard, and you tend to slip forward.

But perhaps the biggest issue I’ve had with the SXR is that it suddenly died on me one day after I reached the office and just refused to start up. I even enlisted the help of some of Autocar’s experts but even they couldn’t get it to start, despite checking the fuel level, air filter and battery. Weirdly though, after leaving it alone for a few hours, it came alive at the first push of the starter. When this happened a second time just a couple of days back, we contacted Aprilia about the matter. They got back to us, stating that it was an issue with the fuel pump but, they didn't disclose how much it cost to get it fixed. It’s unfortunate that my time with the Aprilia SXR 160 has come to an end on such terms, as it had really started to grow on me. Space in the glovebox is tight and can only fit small items.