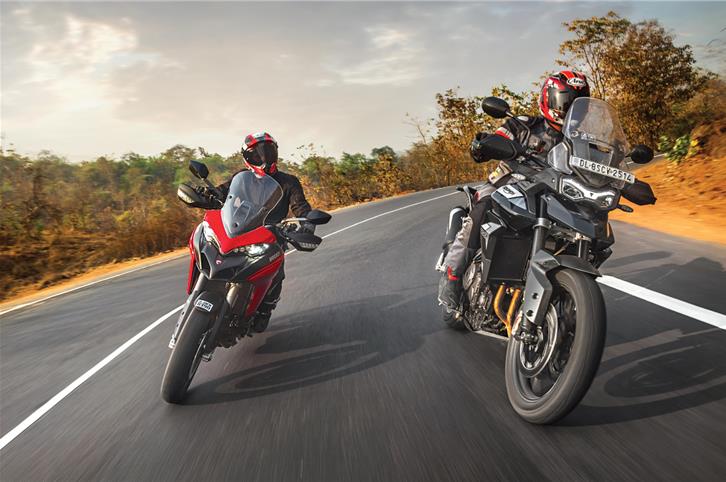 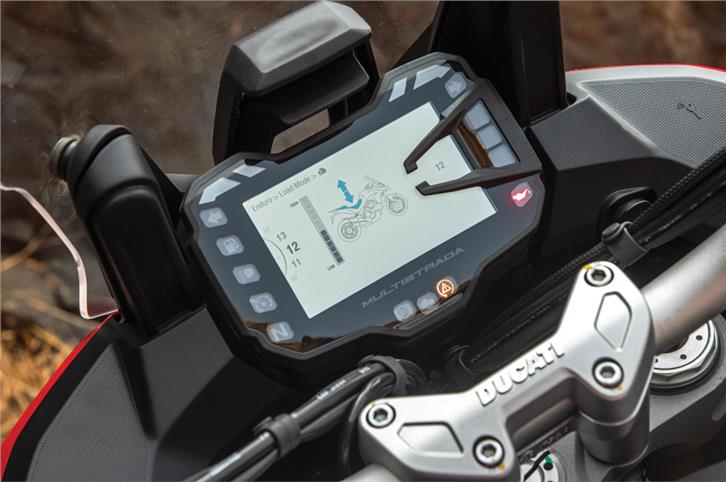 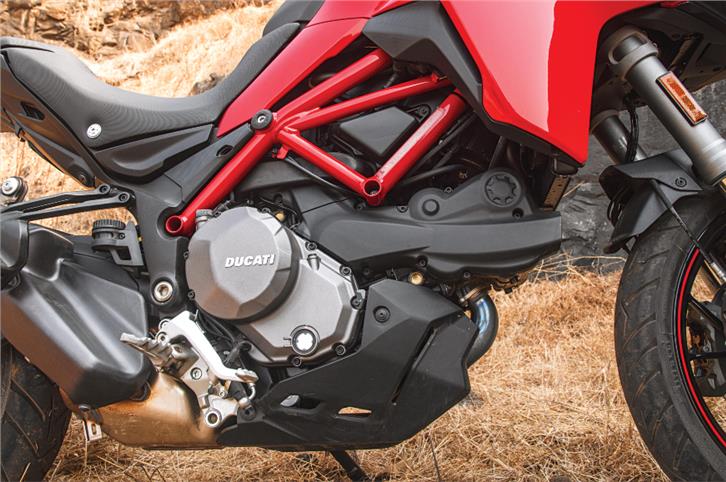 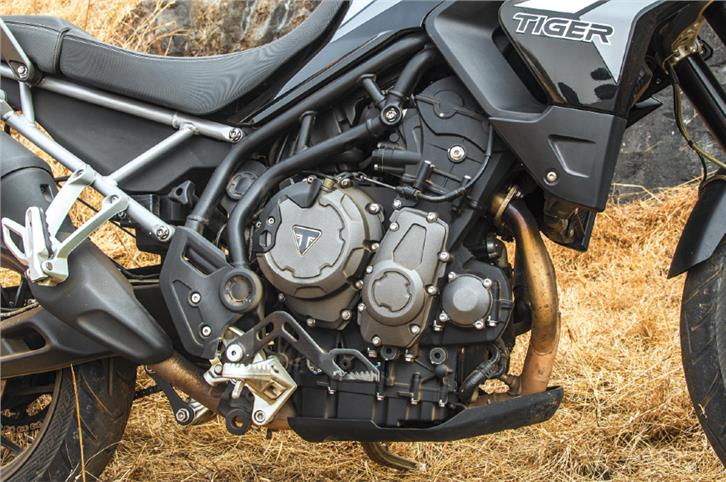 Tiger’s engine is tractable but vibey at high revs.

Of all the ways one can experience a motorcycle, nothing beats the feeling of riding down the road at a quick pace. With the scenery passing by, the wind flowing over you and the exhaust note filling up your senses as the engine chugs along, it is nothing short of surreal. And what better way to do so than on a big-capacity adventure tourer? To be specific, the road-biased ones with alloy wheels, decent ground clearance, suspension travel and ergonomics that’ll make a 1,000km trip seem like a walk in the park.

So far, the Triumph Tiger 900 GT was the motorcycle that best fit the bill, however, our recent experience with the new Ducati Multistrada 950 S has led to a conundrum. Which one makes more sense to spend the money on?

Cold starts are one of my favourite bits about motorcycles. The entire sequence of turning on the ignition, keyless in case of Ducati, thumbing the starter and waking up the engine to a loud bark sets up the mood for the day. The Ducati’s characteristic L-twin sound is a treat, transitioning from a deep bark to an angry growl as the revs rise. Yes, the decibel levels have fallen in the interest of saving the planet, but it still manages to put a wide grin on your face every time. Needless to say, I felt chuffed during the pre-dawn ride to our meet up point. Once I got there, with the sound of the Ducati still in my head, I heard Rishaad approaching on the Tiger 900 GT and immediately felt that the latter sounds much like a twin and less like an inline-triple. Triumph’s idea of a 1-3-2 firing order has had a dramatic effect on the sound, feel and character of an inline-triple. What’s even more surprising is that it sounds notably louder than the Ducati!

Good mornings exchanged, we quickly got on the road and made swift progress through early morning truck traffic. Now, with 113hp, the Ducati is supposed to have a clear advantage over the Triumph, at least on paper. But you know what they say about books and covers, right? 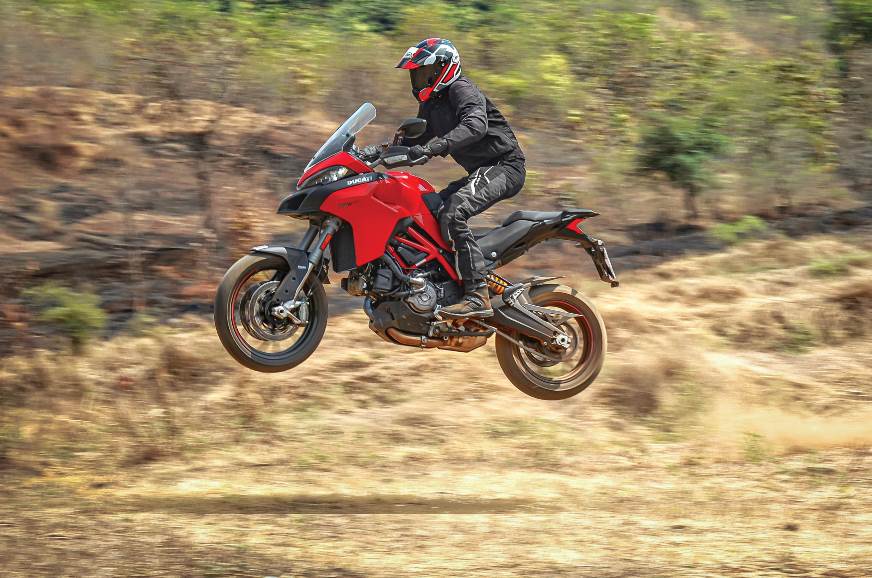 As it turned out, the Tiger was keeping up and at times pulling ahead of the Multistrada, especially in the first three gears. The shorter gearing also meant that Rishaad on the Tiger could easily hold 40kph in sixth and simply roll on the throttle to overtake. I, on the other hand, had to downshift a gear or two to keep the Multistrada in the powerband and that entails a busier time on the motorcycle. What comes as a respite is the light action of the hydraulic clutch and the standard up/down quickshifter, which reduced the amount of effort required to ride the motorcycle in traffic.

Soon, we were clear of the chaos and found ourselves an invitation from the open, almost traffic-free road ahead. And then, as if on cue, we let the big ADVs stretch their legs. This is where the Multistrada comes into its own, as the extra horsepower, that peaks at a higher 9,500rpm, make its presence felt.

The way it picks up pace post 5,000rpm is pure entertainment and one will have to keep an eye on the speedo because the Ducati masks speed so deceptively, you’d reel in the traffic ahead in no time.

The Tiger 900 never lags far behind when the road opens up and manages to stay within reach of the Ducati, albeit with the 888cc triple working harder to keep pace. There’s also a noticeable buzz in the handlebars at high revs but it is not off-putting. If this were a top speed competition, the Multistrada surely would have the legs over the Tiger. However, at real-world speeds, both engines are pretty evenly matched in terms of performance. 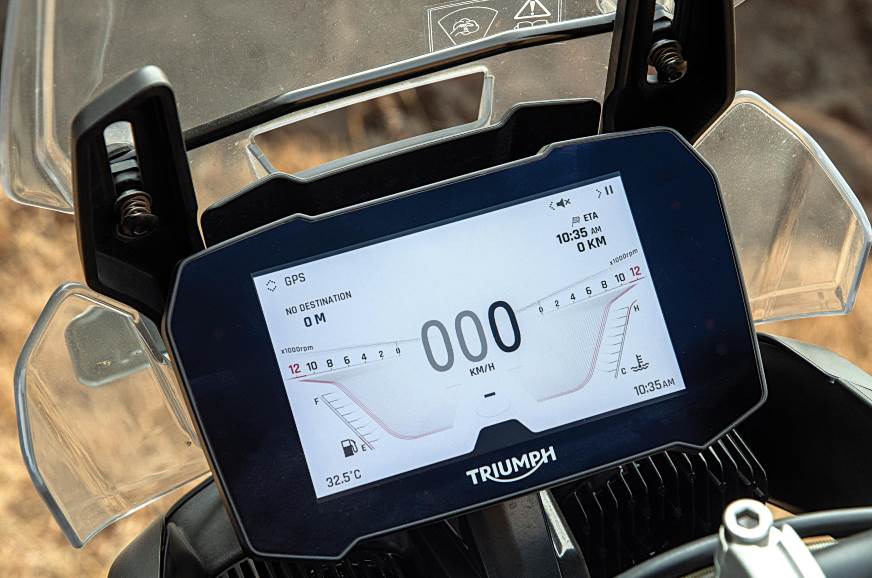 Tiger’s huge display is crisp, but has strange layouts.

As is a given with motorcycles in this class, there is a suite of IMU-assisted electronic rider aids to temper the power delivery, lean sensitive traction control, cornering ABS and basically keep you far away from expensive repairs. The Ducati’s electronics though, are clearly a notch or two above the Triumph’s. Scrolling through the menu on the 5.0-inch TFT, one can alter the riding modes to suit individual tastes or preferences. For instance, you could select touring mode and tailor the amount of engine power (full or 75 percent) you’d want or the traction control and ABS intervention you’d need. The range of customisability is vast and the Triumph’s electronic nannies can’t match up, but do their job well. The only issue we felt is that the traction control system intervenes aggressively, unlike the Multistrada’s that works almost seamlessly in the background and in turn keeps the chassis stable.

Ducati’s brilliant electronics are also responsible for altering the settings of the Skyhook semi-active suspension, and in my words, they do a terrific job. With the ability to change the damping on the front and rear suspension, as well as the preload, electronically, a few seconds is all it took to adjust the suspension characteristics to suit the road conditions.

Rishaad, on the other hand, had to manually dial in the suspension on the front fork of the Tiger or alter the rear monoshock, which meant he had to stop and do so. The convenience that Ducati’s system offers is hence, unparalleled. That said, even at the softest setting, the Ducati offers a relatively firmer ride than the plush Tiger 900 GT that gobbled undulations and potholes more effectively. 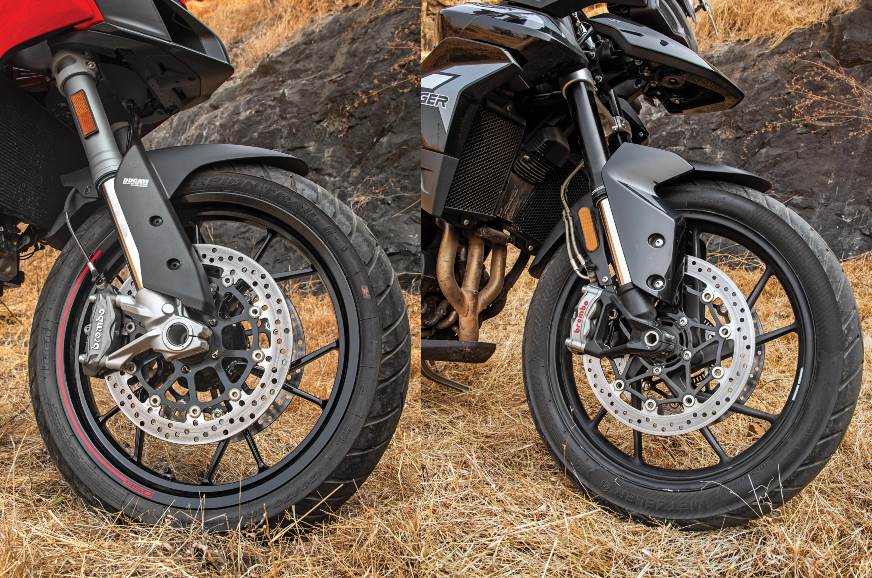 Later that day, as we swapped bikes and got onto a set of twisties, Rishaad began putting considerable daylight between himself and me. While it has a markedly improved front-end feel and cornering ability than its predecessor, the Tiger’s no match for Ducati’s dynamic prowess. If you crave a blast up a winding road, the Ducati will leave you grinning from ear to ear. Its fatter Pirellis also offer better edge grip once leaned over, making it, well, truly a sportbike on stilts.

The brakes on both motorcycles are pretty evenly matched as well, although, the Ducati’s feedback through the lever is crisper.

But, for all the road holding abilities of the Ducati, it makes its rider work much harder than the Tiger off-tarmac. The fatter 120-section front tyre was easily deflected by the tiny rocks on the trail and the thought of dropping this 230kg machine with all its pretty bodywork and ornate mirror stalks was unnerving, my limited off-road skills notwithstanding. The grumbly engine below 2,000rpm meant it was more prone to stalling. On the upside, the Enduro mode did serve as a great helping hand in keeping things pointing the right way, and given the level of suspension adjustability, it can absorb hard landings after flying over a mound in an impressively composed manner. 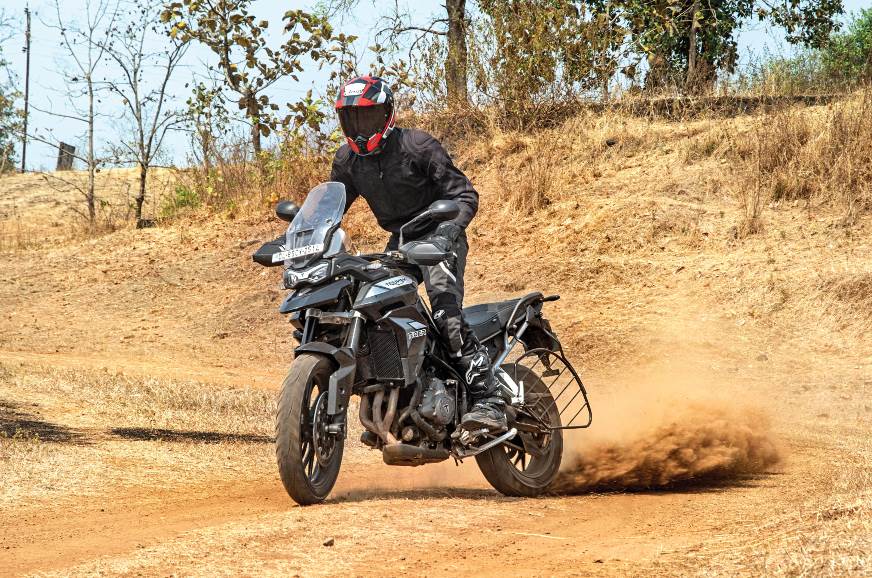 Rishaad, meanwhile, went on to demonstrate why this Tiger has earned its stripes off road. It can jump, slide, climb steep gradients and basically hoon around with ease, despite running road-biased Metzelers. The fact that there are fewer plastics, less weight, narrower tyres and a well-tuned off-road mode to help out were reasons why the Tiger is far more encouraging than the Ducati in such situations.

BEAUTY AND THE BEAST

With all the fun we’d had throughout the day, it was time to sit back, relax and admire the designs of these incredible motorcycles. Try as much as we did, we found it hard to peel our gaze off the Multistrada. Trust the Italians to make anything beautiful, and the way an ADV like the Multistrada has been styled speaks volumes of their abilities. Whether it’s the angry beak, the scooped seat or the way the fanged LED tail-lamp has been integrated, this is a lovely amalgamation of form and function. The sense of quality in many areas is a notch above the Triumph’s, with the shimmering Ducati red adding a dollop of appeal that’s simply hard to resist.

The Triumph is not as pretty but it has a greater sense of purpose in its design and that’s evident in the slim front end, split radiator and exposed subframe. It is also a lot more compact and far less top-heavy than the Multistrada, which clearly dwarfs the Tiger when it comes to sheer presence. 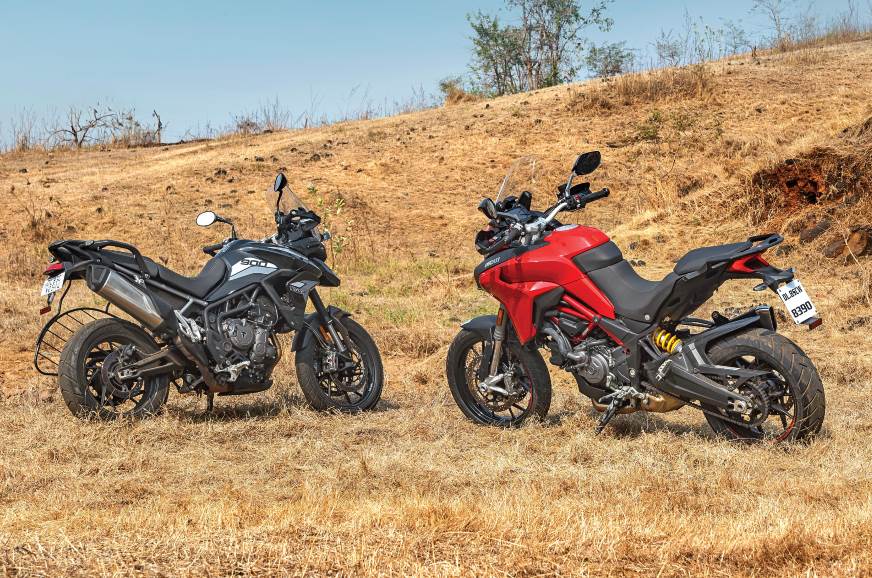 Ergonomically, the Triumph is also a better long-distance tourer, with low and relatively forward-set pegs and a lower and longer seat that will be much appreciated by 6ft-plus riders. The Tiger’s windscreen works better in our hot conditions, and is easier to see through as well. The Ducati has your lower body contoured in the position of a sporty street naked, with its high and pared-back pegs. The deeply scooped seat doesn’t leave much room to move around, but is very comfortable. It can be raised or lowered from the standard 840mm height, albeit by paying extra. The upper body, meanwhile, is upright, with the wide handlebar offering a lot of leverage.

The Multistrada 950 S and the Triumph Tiger 900 GT are two extremely capable, comfortable and well-equipped motorcycles in their own way, and each caters to a different audience. If you are looking for a fast and sporty road riding experience without a care for silly things like broken roads, the Multistrada 950 S is the one for you. It may seem pricey, at Rs 15.49 lakh, but considering the semi-active suspension, cornering lights, hill hold and other features offered, it is quite good value. Not to mention its overall performance and on-road dynamics that will ensure the fun never stops. But the Tiger 900 GT is the one that’s the more versatile bike here. It is just as quick in the real world, and much more effortless to ride, be it in the city, out on the highway, or on the trail. At Rs 13.70 lakh, it is nearly Rs 2 lakh cheaper than the Multistrada 950 S, which makes it a more affordable, yet capable ‘adventure motorcycle’ in this test. 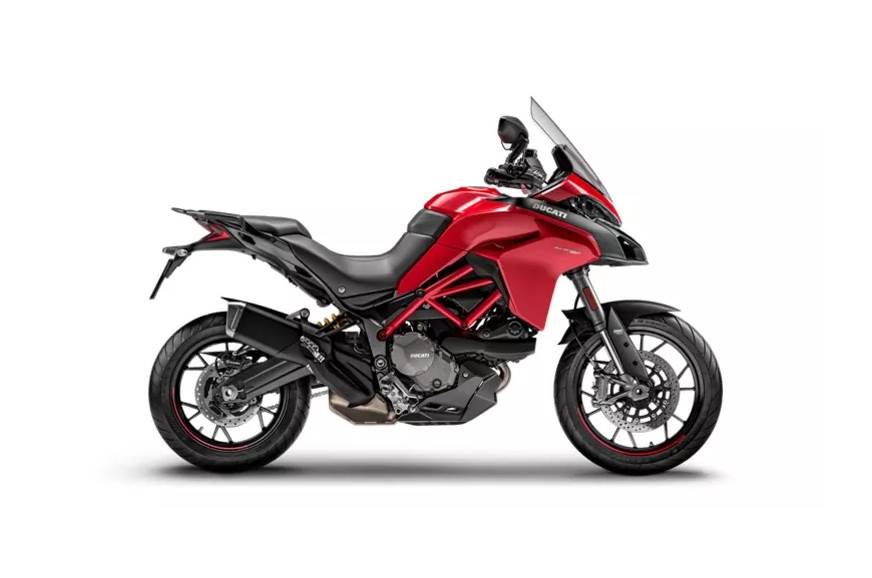