A day spent riding three of Aprilia’s latest sport bikes at the Dubai Autodrome is a special day indeed. Here's what it was like. 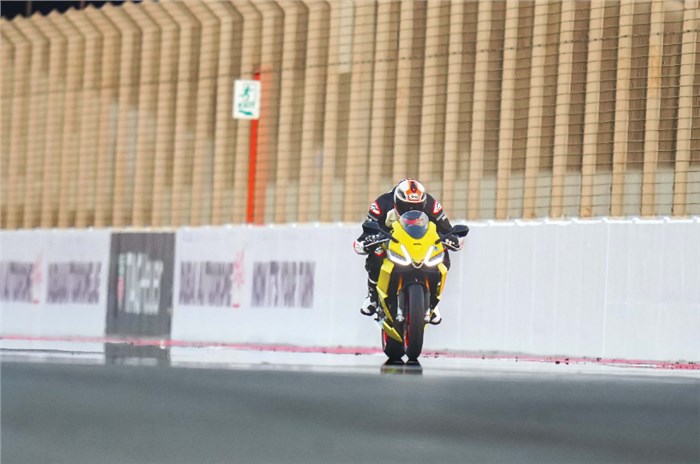 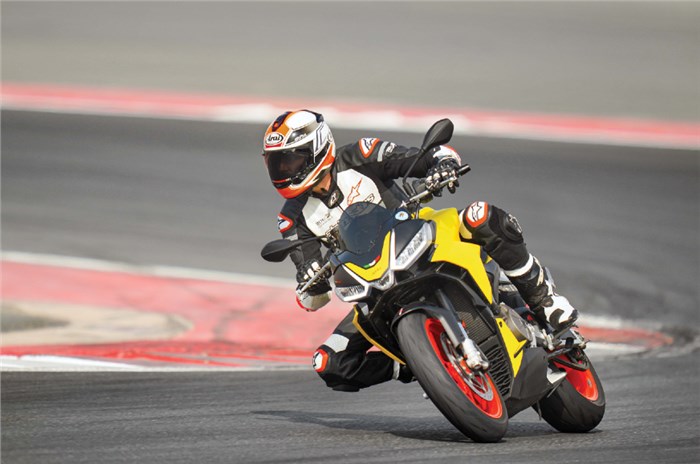 About five years ago, I got a single session on an Aprilia RSV4 RF around the Kari Motor Speedway and declared it the greatest track riding experience of my life. The last five years have sadly been devoid of any Aprilia V4 goodness, but that thirst has finally been quenched.

On a recent holiday to Dubai with my partner, I got to attend a track day at the Dubai Autodrome where Society Motors, the Piaggio distributors for UAE, were nice enough to let me ride three of the latest Aprilia sport bikes, the Tuono 660, RS 660 and the mighty RSV4 1100 Factory.

The day was split into three 20-minute sessions of riding and I first went out on the new Tuono 660. Given the brief time with each bike, consider this an overview of the experience, rather than full-on reviews.

The first impression of Aprilia’s brand new 660 platform is that these are larger feeling bikes to sit on than you might expect. From the rider’s perspective, the bike feels substantial, more like a Honda CB650R rather than something as svelte as the Triumph Trident 660, or the KTM 790/890 Duke. The good news is that this doesn’t come at the expense of weight and the Tuono is just 183kg wet, which is lighter than the above mentioned bikes.

It took some fiddling around to understand how the buttons work and what options are available on the nice looking TFT display. It’s cumbersome, but when you figure it out, you’ll find that there are five riding modes – three preset ones for the road and two customisable ones for the track. 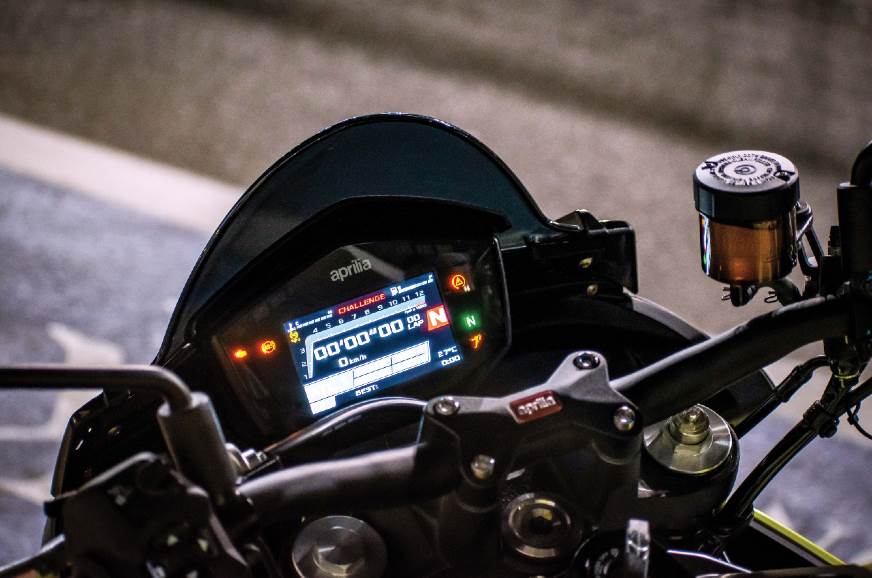 These Aprilias easily have the most advanced electronics in the class with adjustable traction control, ABS, three engine maps, engine brake control, wheelie control and even cruise control. Unfortunately, the bi-directional quickshifter and a 6-axis IMU are standard on the RS 660, but optional extras on the Tuono.

Aprilia’s newly developed 659cc parallel twin does a remarkable job of feeling different to the many other similar engines in the market. It revs higher than most, with a 11,500rpm redline and the high rpm bark it produces does give you some small feeling of the V4 lineage in there. 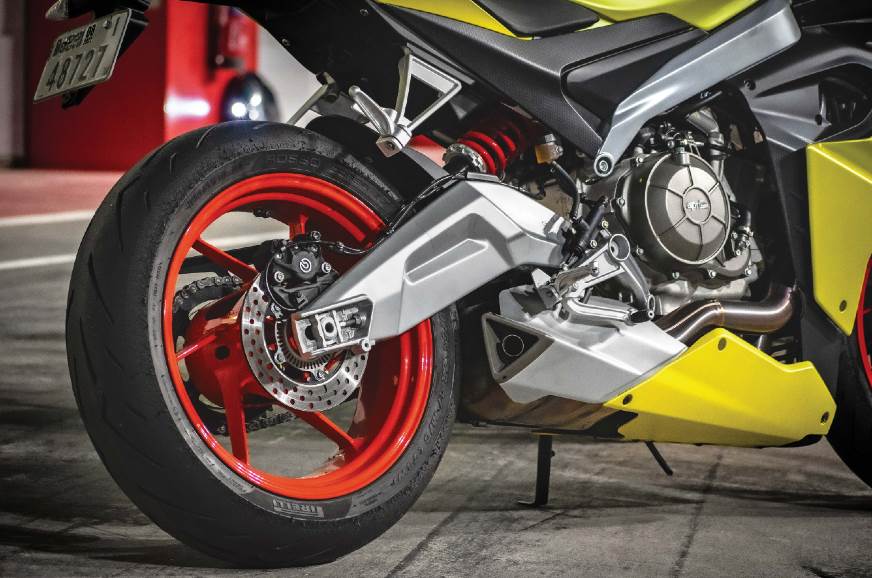 Both the 660s get a neat underslung exhaust

With 95hp, it’s 5hp down on the RS660 but still fast enough to surge well past 210kph down the main straight. Haul on the brakes for turn one and the Brembo set-up responds with great power and surprising sharpness, while the rigid feeling aluminium perimeter chassis keeps the bike nice and stable.

Soon enough, the first session was done, and while I was just starting to get accustomed to the track and explore the motorcycle’s capabilities, that would be saved for the third session on RS660. Now, it was time to jump onto the big one!

With 217hp from its larger for 2021, 1,099cc V4 motor, the RSV4 1100 Factory makes the highest claimed power figure of any bike in the category. But before experiencing the full fury of what that felt like, the immediate impressions in the pitlane were all positive. First, I think the bike looks smashing in person. While there was some apprehension when the images first emerged, the new one just looks sharper, more modern and up to date when parked next to its predecessor. Oh, and that giant wing, worked into the bodywork along the face, just screams ‘speeeed!’

The RSV4 was always quite a cramped motorcycle, but Aprilia has lowered the seat and the foot pegs a bit for 2021, which is good news for most shapes of people. It’s still not as spacious as a BMW S 1000 RR, but I still found the ergos quite decent, especially in the wide clip-ons that create great steering leverage.

Trundling out of the pits, the motor feels more lumpy below 2,000rpm than I remember, probably down to the new emission norms. The Euro 5 exhaust is also more muffled than before, but it still sounds fantastic at full chat. From a bystander’s point of view, it’s the magnificent MotoGP sound that makes this machine so deliciously exotic, but for the rider, there’s so much more than just that. 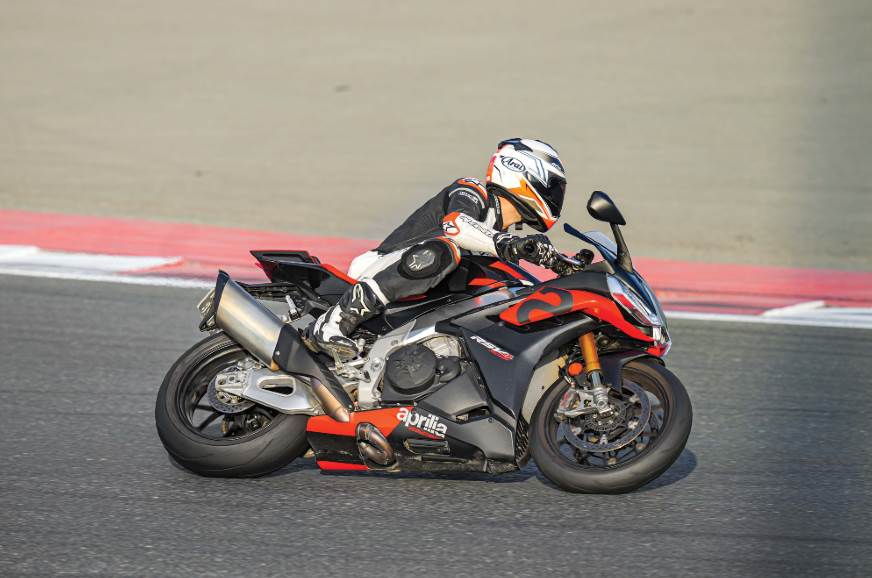 Now familiar with the track, I wasn’t going to waste any of my precious 20 minutes with this bike. To jump from 100hp to 217hp and instantly feel comfortable is a mark of just how good the RSV4 is. The front end feel is exquisite, and it’s like you can just steer the bike wherever you like, no matter the line or level of lean.

For perspective on just how fast it is, I briefly found myself behind one of the Autodrome’s official marshall riders on his souped up, carbon fibre-everything BMW HP4, and the RSV4 stuck right to his tail down the long back straight. It’s mental just how fast production superbikes have become. 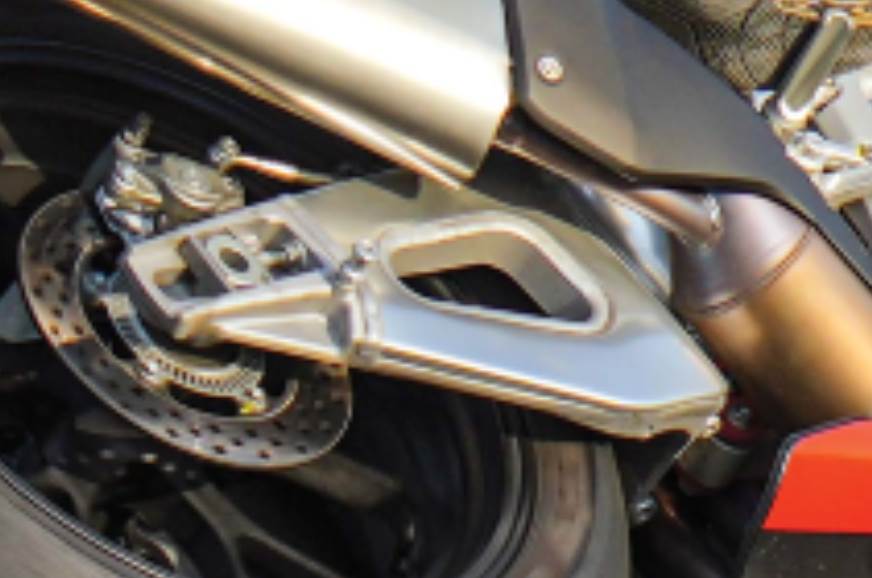 The RSV4 gets a new under-braced swingarm.

With its Ohlins Smart EC2 electronically damped suspension, exceptional Brembo Stylema brakes, sophisticated yet utterly transparent electronic rider assist and leech-like Pirelli Supercorsas, those were the most rewarding 20 minutes of my 2021. It didn’t matter that the BMW S 1000 RR feels lighter on its feet, or that the Panigale V4 is a more visceral and violent experience – the RSV4 remains the sweetest litre-bike I’ve ever ridden.

Just like the Tuono 660, the RS is a beautiful motorcycle, but even more so thanks to the sportier proportions from its full fairing, taller windscreen and lower clip-ons. Aprilia’s signature acid gold colour looks like nothing else, and the fact that the 660s share the same LED front and rear lighting as the RSV4 adds to the special feeling. 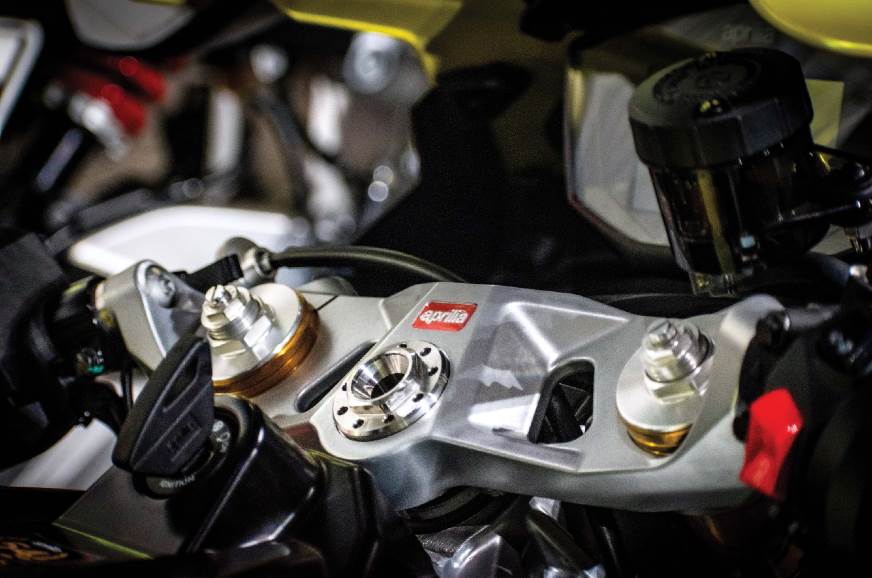 RS’ suspension is adjustable on both fork legs.

On track, the RS (predictably) feels more connected than the Tuono, thanks to its lower bars, higher footpegs and the extra wind protection. Even after hopping off the RSV4, the 660’s brakes still feel very potent, but the same can’t be said for the suspension. The 660’s suspension is adjustable, but once the pace gets high, there is a lack of feedback and control that you’d expect from high quality suspension, particularly at the rear.

The 660s will make for sweet road bikes thanks to their strong mid-range performance, electronic toys and relatively kind ergos; But on track, it’s clear that they’re not as good as a traditional 600cc supersport. My friend Imran on his Yamaha R6 could have left me behind on the straights if he wanted to and his suspension set-up and more committed ergos were definitely better suited to the track. Then again, his R6 is never used on the road. 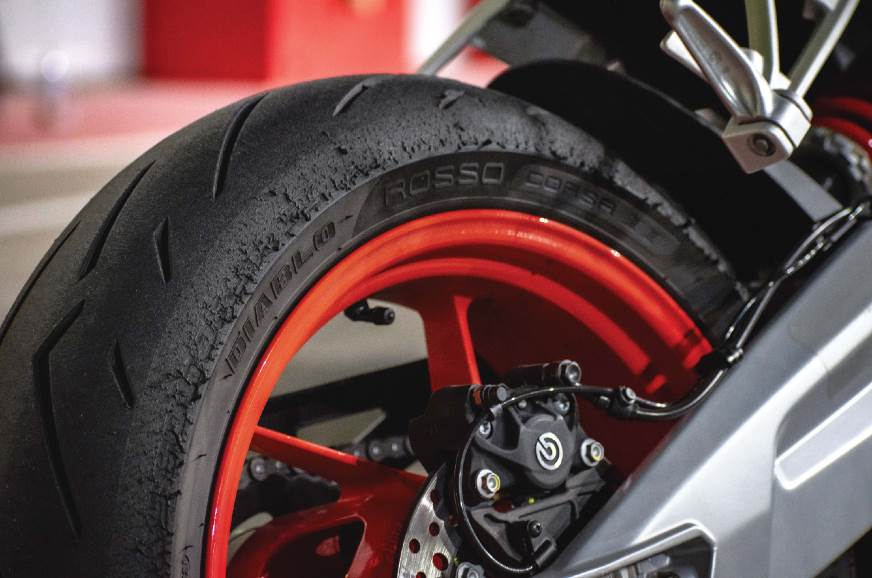 Ultimately, the RS 660 is closer in intent to a Honda CBR650R than a Honda CBR600RR. For its fantastic Italian style, higher power and far more comprehensive features package, it commands Rs 2 lakh over the Honda CBR650R in the UK, which is absolutely reasonable.

In India though, the RS 660 costs Rs 13.39 lakh (all prices ex-showroom) which is nearly Rs 5 lakh more than the (already overpriced) Honda and that’s an almost impossible pill to swallow. The Rs 13.09 lakh Tuono 660 is perhaps even worse of a deal here. With such a small difference, you might as well buy the more powerful and better specced RS, if you’re willing to spend this kind of money. Ironically, things are much more reasonable with the RSV4 and in this segment, it’s the Rs 32 lakh Honda CBR 1000RR-R that carries the ludicrous price tag in India – and that’s the base model. In comparison, the top shelf RSV4 1100 Factory costs Rs 23.69 lakh, while the base RSV4 1100 costs Rs 20.93 lakh, ex-showroom. That puts the Aprilia on par with the BMW S 1000 RR, and makes it a whole lot more affordable than the Panigale V4  range.

If only Piaggio India would give its big bike range a little more focus, these incredible machines would achieve the success they so richly deserve.

This story wouldn’t have been possible without BikeWithGirl, The Biker Crew UAE and Society Motors UAE.