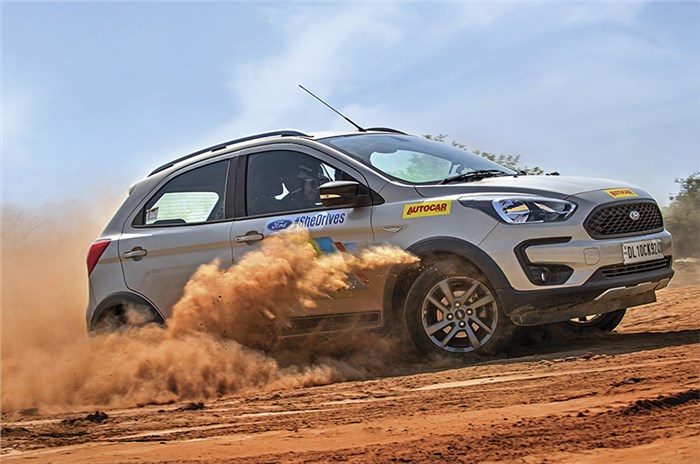 After an overwhelming response in Mumbai, the Ford #SheDrives pro driving school moved to Gurugram, where women from all over Delhi-NCR came to sharpen their driving skills. We report from the event.

Motoring events are high on every true-blue automotive aficionado’s wish list. We, at Autocar India, are always looking forward to such occasions because they present us with a chance to live the passion that drives us. Sadly, these events don’t see enough participation from women. This begged the question: Why should boys have all the fun? Can’t women manoeuvre a car around a track as well as men? To put this to rest, we teamed up with Ford India to organise #SheDrives – a first-of-its-kind pro driving school for women. And to help the ladies get in touch with their inner petrolheads, we had Asia-Pacific Rally Champion, Gaurav Gill, as driver coach. The first event held in Mumbai was a resounding success. The school then moved to Delhi-NCR to give women another go at driving like pros. 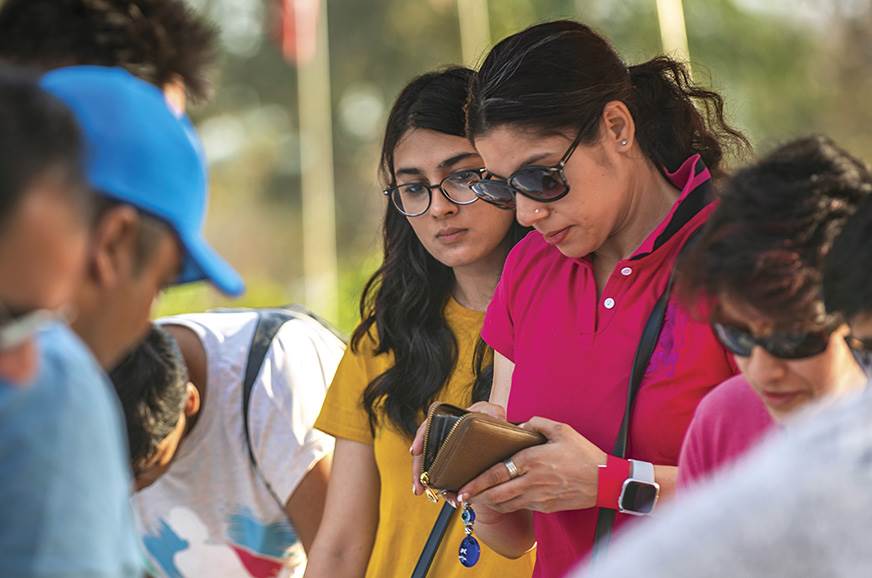 Over 200 women registered for the Gurugram leg of #SheDrives.

Held in Gurugram over a bright and sunny weekend at the end of March, the second edition of Ford #SheDrives saw the participation of over 120 women from all walks of life. To help them learn advanced driving techniques, an autocross track was constructed, consisting of fast straights, tight corners and chicanes. The morning began with ace rally car driver, Gill, taking each of the participants on a sighting lap in a completely stock Ford Freestyle, acquainting them with various portions of the track. This was followed by an all-out hot lap, which showed the participants what it would mean to drive on the edge. All women then drove around the dirt track and their performances were timed.

Having set a benchmark, the participants moved to a slalom course where they practised various skills such as tackling corners on dirt, dealing with understeer and oversteer and using the handbrake to go sideways (in a controlled manner, of course). Finally, they were given another shot at a hot lap to see if they could shave crucial seconds off their time. 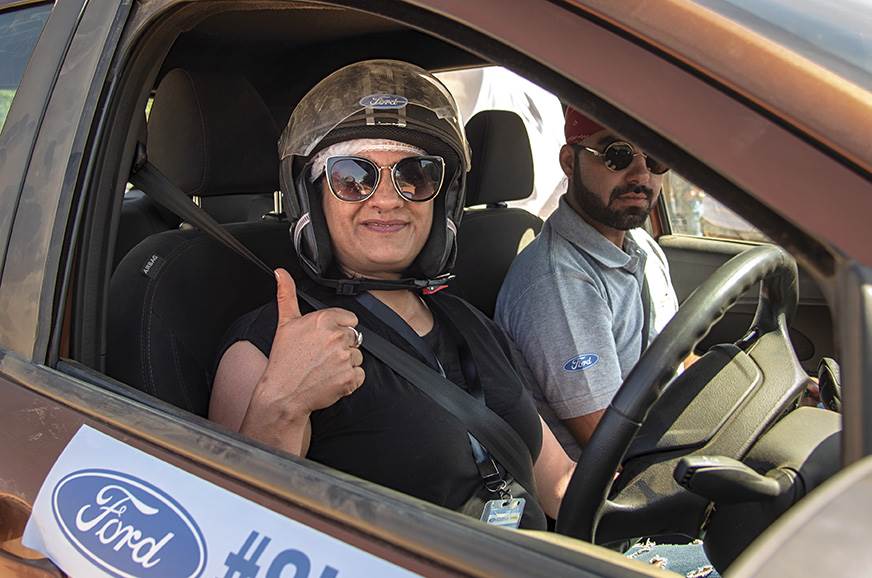 Most participants improved on their original lap times by a significant margin.

With practice coming to an end, it was time for the participants to put the pedal to the metal. But before that, topics like the right line to take around the track, acceleration and braking were discussed with the instructors to wring the most out of their cars – and the results, you ask? They managed to better their lap times by a considerable margin and the instructors were highly impressed with a few; and that’s no small feat. According to Gill, the time spent on the circuit was not just about fun. “The new insights into driving techniques will also help the participants become better and safer drivers on the road, and that’s a wonderful thing,” he said.

By the end of the day, there was a grin on every participant’s face. All of them felt the very concept of a driving programme exclusively for women made them feel comfortable about signing up for such an event. Some had such a blast that they showed up on the second day, just to have another chance at bettering their lap times. 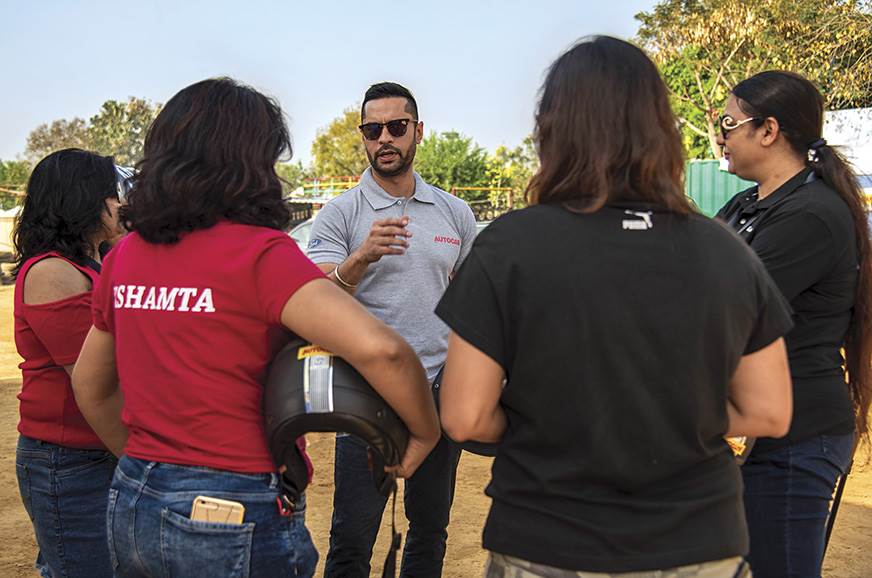 With both the Mumbai and Gurugram legs witnessing a high turnout, the #SheDrives pro driving school will soon make its way to another city. So, ladies, keep your eyes peeled for an update on our social media channels! 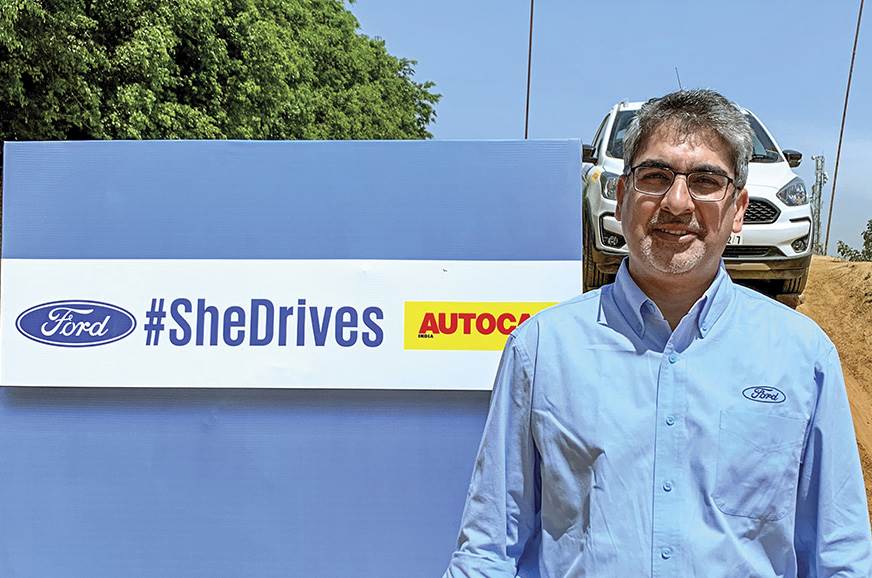 How has Ford worked to preserve the fun-to-drive element associated with its models?

Over the past few years, we’ve made sure that both the product as well as the experience we create for the customers is something that lives up to the ‘fun to drive’ idea. And we’ve seen that over the last five years in the new car buyer survey conducted every six months, people have started appreciating those aspects as well – not just the ‘fun to drive’ element but also safety. It’s becoming more important than just price or cost of ownership.

There are more women buyers coming in. Today, across the industry, 8 percent of car ownership is women. We believe over the next few years that figure will rise to 12 percent. The good thing, as far as Ford is concerned, is that women constitute 15 percent of all EcoSport buyers, and 25 percent of Freestyle buyers.

How will you adapt your products to better suit the needs of women buyers?

As OEMs, we’ll have to start thinking about crafting and designing products that keep the sensibilities of women at the fore, and the orientation or utility they may be looking for. I’m happy to see women car ownership increasing and to see them going after attributes beyond price and cost of ownership.